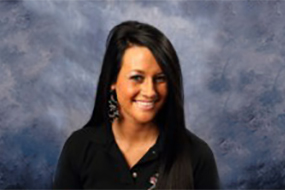 If Andrea Staples’ mom couldn’t find her in the toy room as a child, it was a good bet she could find her locked in the bathroom, covered in make-up, with heels on.   Andrea’s interest in cosmetology started young and she had her future career in site by 6th grade. She dreamt of becoming a cosmetologist and earning a degree in business so she could own a salon one day.

Andrea started researching schools a few years ago and decided to take a tour of Mr. John’s School of Cosmetology in South Jacksonville.  She liked the warm, welcoming atmosphere of Mr. John’s immediately.  Her tour guides introduced her to each student and staff member, gave her a free service, and answered all of her questions. Andrea decided to attend Mr. John’s and loved how the school felt like “a huge family.”

Andrea didn’t anticipate becoming a teacher until later in her career, but says that the experience has “taught me a lot and helped me to mature as a person.”  She likes teaching in a classroom setting, but loves being on the salon floor working with students.  Andrea enjoys interacting with students and clients, especially since she was in the student’s shoes not so long ago.

She sees her role as “helping people instead of being superior to them.”  Andrea’s goal is to encourage students and help them build confidence in their own skills.  She says, “it’s not hard to step in the right way and support without stepping on student’s toes.”

The instructors at Mr. John’s positively influenced Andrea as a student and she now appreciates having them as co-workers.  Andrea calls Ronda, the director at Mr. John’s, “Gold” and the reason she chose the school initially. “I was thrilled with my experience as a student,” she explains, “and that’s why I stayed.”

While Andrea enjoys teaching, she continues to work toward new goals.  Her father, retired Illinois State Police Captain Patrick Staples, always encouraged Andrea and “pushed me to keep going” and to challenge herself.  Andrea is now attending Lincoln Land Community College online, while working part-time at Mr. John’s, and continuing to serve her own cosmetology clients.

Andrea’s free time is limited, but she wouldn’t have things any other way.  Much of her nights and weekends are committed to studying and participating in marketing activities for the school.  She loves spending time with her Mr. John’s family and laughs because she often finds herself dropping in to say “hello” on days off.

The school is also celebrating its 50th anniversary this year, with a variety of fun events to celebrate. They will offer a “kiddie camp” this summer, as well as other activities, such as a “quick tease day,” where the public can come in and learn what it’s like to attend Mr. John’s.

Andrea invites anyone interested in learning more about cosmetology school to visit Mr. John’s.  She is a cosmetologist because she “likes making others feel good about themselves.  It’s the best part of the job.”