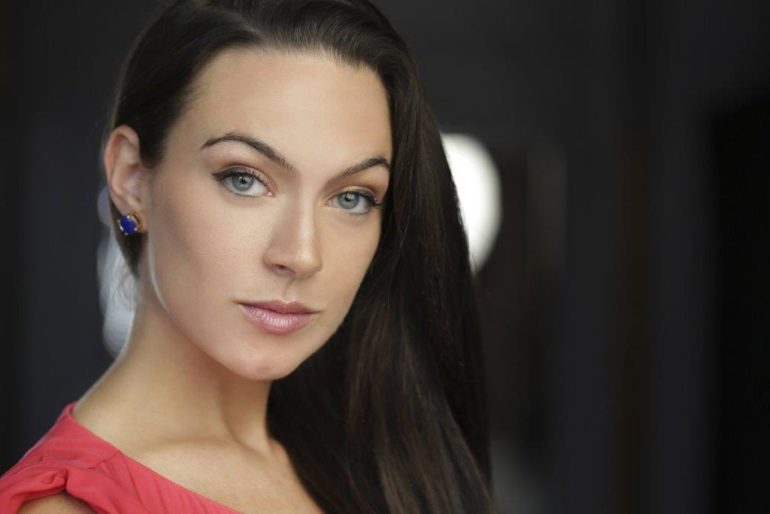 “There’s an expression ‘You are a Jack of all trades but a master of none.’  Well, that’s just ridiculous because you can be a master of all those trades if you work at it, and that’s how I operate. I take things on that are a challenge and won’t give up until I reach my goals, end of story.”

The words “I can’t” don’t seem to be in Jenny Sauer’s vocabulary. The farmer’s daughter, turned clinical researcher- fitness instructor-actress-writer, pursues interests and opportunities as they come, with little reservation.

Jenny grew up in Winchester working on her family’s farm and continues to help today.  She values her rural, small-town roots.  “I’m where I am right now because of my family’s incredible support and my stubbornness for never failing. The support of the surrounding local communities, around the area from which I was raised, has been overwhelming,” Jenny explains.

While Jenny’s heart remains in Central Illinois, her feet have led her to many new places.  She initially earned a bachelor’s degree from Illinois College, then decided to try fitness instruction in after graduation.  Jenny then made her way to Little Rock, where she became a clinical researcher for the Jones Eye institute and published in academic journals by the age of 24.  Jenny has also successfully pursued modeling in Chicago and coordinated a college fitness program in Oklahoma City.

Jenny’s diverse interests took her most recently to Los Angeles.  She decided to visit LA one day “just to see how it was” and decided to pursue an acting career.  In just three short months, Jenny obtained her SAG card and became a professional, working actor.

Some of Jenny’s initial success came from appearing in 16 episodes of the popular BRAVO series The Millionaire Matchmaker.  She joined the reality series when a casting director friend invited her to participate.  Jenny did not find the love of her life through the show, but met great friends and calls it “a fun and funny” experience.

Jenny’s resume includes roles in several popular films, including Like Water for Elephants and Hangover 2.  She has worked on television shows, such as The Mentalist, CSI: Miami, and Underemployed.  Jenny has also found success in commercials and participated in her first national commercial with Swiffer this past year.  When the Swiffer commercial featuring Jenny demonstrating the Swiffer steam boost, began airing, she received daily texts from friends saying, “I saw you on tv!”  Jenny says the recognition has proved “very humbling.”

After gaining important experience in LA, Jenny decided to return to the Chicago area to pursue her career goals.  She also decided to try yet another creative outlet and completed her first book, Snickering Out Loud, in 5 days.  The book comes from Jenny’s experience on “many first dates” and her assessment that “common sense is not common.”  She provides frank and funny advice for both men and women in the dating scene.

The initial idea for Snickering Out Loud came from Jenny’s friends, who encouraged her to share her stories over the past few years.  Jenny had a compilation of dating stories from her experiences, as well as those of her friends.  Writing the book consisted of primarily creating an introduction to put her advice in context and weave the stories together. Jenny calls writing “the fun part” and says learning the ins and outs of editing and publishing proved the real challenge.

While the book is filled with wit and humor, Jenny says it is not meant to demean anyone or to gain revenge.  “It’s meant as humor,” Jenny explains.  “The book is mainly just my mess ups and how to learn from my mistakes.”

Snickering Out Loud is currently receiving positive reviews from readers and bloggers.  Jenny finds the success unexpected and is thrilled that readers are enjoying her work.  She is also grateful for the support of local friends and businesses, who want to help spread the word about her book.  If you are interested in meeting Jenny and having her sign a copy of her book, you can find her at Duncan and  Hoots from 10 am to 1 pm and Leo’s Pizza from 2 pm to 4 pm on April 25th.  Snickering Out Loud is currently available through Amazon and Lulu.com.