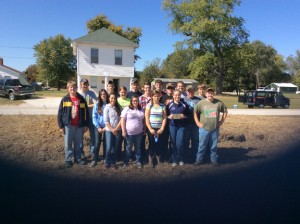 The Triopia FFA Chapter took first place at the 2015 Section 13 Land-Use CDE. The contest was held southwest of White Hall on October 14. For the contest, students had to calculate slope percentages, examine soil properties, and perform soil calculations in order to determine proper tillage practices for the soil. Brooke Job placed first overall individually while three other members of the chapter were also in the top ten. Those included: Gannon Greene, 2nd place, Matt Privia 4th place , and Ryan Hancock, 5th place. 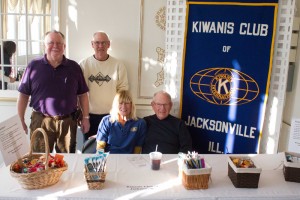 Kiwanis Club of Jacksonville hosted a table at the Annual Educator Appreciation Event at Hamilton’s. 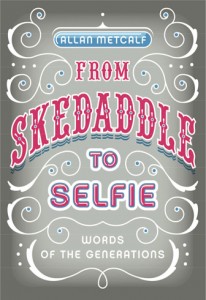 JACKSONVILLE, IL – Allan Metcalf’s latest book, From Skedaddle to Selfie: Words of the Generations, has been published this month by Oxford University Press. It is the seventh book about language by Metcalf, professor of English at MacMurray College.

From Skedaddle to Selfie looks at words that characterize the different generations in American history, words like selfie (a favorite pastime of the current Millennial Generation), slacker (from Generation X, born in the 1960s and 1970s), and groovy, hippie, and lifestyle (all coming from the generation of the baby boom).

The book, which lists at $19.95, is available at the MacMurray College bookstore and Our Town Bookstore in Jacksonville, IL, as well as booksellers everywhere. See more here. 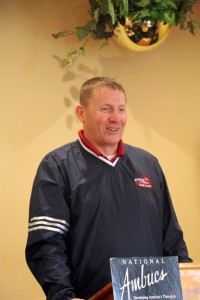 Jacksonville, IL. – November 2015: The Director of Morgan County 9-1-1 has announced the launch of a new emergency 9-1-1 text service in Morgan County. Director Phil McCarty says the new service becomes active and available on November 17th, 2015. Any cell phone user served by AT&T, Sprint, U.S. Cellular or TMobile can access the service from anywhere within Morgan County. Users must be

using cellular data, not WiFi when accessing the service. According to McCarty, the new 911TEXT feature is designed to extend and enhance existing 9-1-1 services. Said McCarty, “this by no means replaces voice calling. Voice calls to 9-1-1 are still the fastest and preferred method for receiving emergency services. But, if you can’t speak, this is a fast and convenient alternative. The new 9-1-1 Text program is designed primarily for use by the extensive Deaf Community in Morgan County.” McCarty says currently, Deaf callers to 9-1-1 are forced to use a voice relay service. The relay can be slow and frustrating in situations where seconds count. “We are, of course, limited by the speed of text on the various phone networks…but our testing is showing some impressive time improvements over voice relay contacts.” The new 911TEXT service also directly links the person making the contact with 9-1- 1 operators. Says McCarty, “text contacts are serviced by our existing 9-1-1 operators. They can answer questions directly and start the process of dispatching emergency services while staying in text contact with the person needing the services.” Being able to text 9-1-1 is new, and somewhat unique. According to McCarty, “there are only a few counties in the stare who have implemented 911TEXTing. We just thought it was a perfect fit here in Morgan County. It’s obviously a huge benefit to Deaf users, but it can be used by anyone.” McCarty says health emergencies such as a stroke or heart attack that can render a victim unable to speak may lend themselves to a text contact. “There is also the home invasion situation…if someone is in your home and speaking on the phone could tip them off to your location, texting is an obvious alternative.”

McCarty says the service is ‘live’ in Morgan County as of Tuesday, November 17th, 2015. “We are up and running. Now it’s up to the public to make use of the service.” Anyone wishing to use the service should set up a contact in their phone named “911” with the number to be dialed also “911”. Says McCarty, “that’s with no spaces or dashes…just 911.” When creating a new text, punching in just “9” from a contact list should pull up the contact. McCarty warns, “the texting section of most smart phones is really geared towards names. It will sort of fight you when it comes to a number. It’s best to create the ‘911’ contact now so accessing it will be quick and easy in an emergency.”

Morgan County Sheriff Randy Duvendack sits on the Emergency Telephone System Board. According to Sheriff Duvendack, “voice calling will always be the fastest way to get to 911…but being able to add this 911 texting service in Morgan County is a great thing. It expands our ability as emergency services providers to help everyone in need quickly and effectively.”

There will be a Property Tax Seminar on Tuesday, November 24, 2015 at 7:00 p.m. in the Municipal Building’s City Council Chambers. This seminar is co-sponsored by Morgan County, the City of Jacksonville, and State Representative C.D. Davidsmeyer.

Attendees will receive information regarding a property tax card, their property tax bill, and GIS (Geographic Information Systems). There will also be explanation of the Disabled Veterans Property Tax Relief and the property tax appeal form. This will be presented by Morgan County Commissioners Brad Zeller, Bill Meier, and Ginny Fanning, and GIS Coordinator Shawn Artis.

City Clerk Skip Bradshaw will explain the City’s levy process and remarks will be given by State Representative Davidsmeyer.

This seminar will help residents understand the property tax program from assessment to appeal. 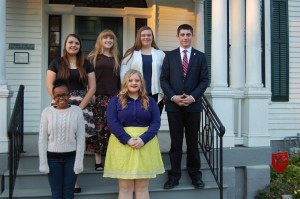 Each year the Reverend James Caldwell Chapter NSDAR reaches out to area schools in search of high school seniors who exemplify the qualities of dependability, service, leadership and patriotism.  The school faculty selects 3 seniors who have demonstrated these qualities in an outstanding way.  From these 3 students, the senior class selects one student to receive the NSDAR Good Citizen award.  Students receive a certificate and a NSDAR Good Citizen Lapel Pin, and are invited to take part in writing an essay to compete for a Good Citizen scholarship.  These awards were presented at our chapter meeting on Tuesday, November 10, 2015.

More than 500 pieces of artwork are on display at LLCC Jacksonville and the artists range in age from ten to eighteen. Art teachers within the ROE area have selected artwork created by students in grades 4 through 6 and the high schools for display at LLCC-J and the winners are as follows: