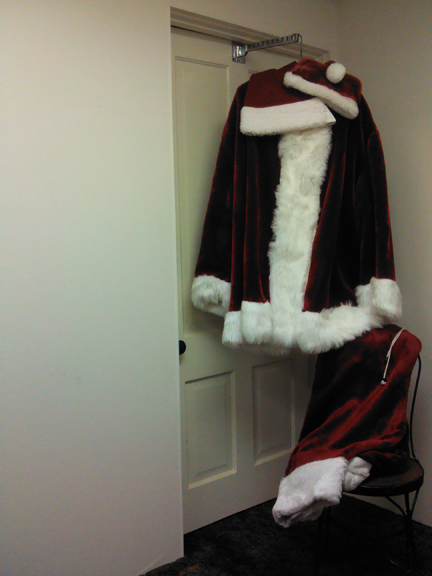 Preparations are already underway for Santa Claus’s annual visit to Jacksonville. Santa should be pleasantly surprised by the sprucing-up of his 40-year-old house on the square. Lincoln Land’s Community College carpentry class put on two new red doors courtesy of Stewart’s Auto Body. The class also worked on the cheery red metal roof and repaired siding. Tom Winner of the Heart of Jacksonville said Jan Terry, the former executive director of Lincoln Land Community College, had originally thought of the idea for the carpentry class to assist in fixing-up Santa’s House. A new floor was donated by Sablotny Floors, and Winner said much of the material used for Santa’s House was bought at Home Depot. The interior also got a facelift. Nancy Bork has decorated the interior of the house for years, and Winner said she adds a magical touch. Just when will Santa Claus be making an appearance?

Santa Claus will be arriving on the day after Thanksgiving. “Santa has arrived on that day for as many years as I can remember,” Winner said.

Each child who visits Santa Claus’s home gets a candy cane. Winner said there recently has been 1,200 to 1,300 children who come to see Santa. There use to be around 500 to 600 children who visited Santa at his house. A basket full of supplies for a Christmas meal will also be given away this year. Terry started the idea, and Winner is going to carry it on. Parents can enter the drawing for the basket while the children visit with Santa Claus. Ron Redding, owner of the local Ponderosa Steak House, always makes sure he and his employees have hot chocolate and a sweet treat on hand for the festive event.

Plans for the parade are already gearing-up. Winner said this will be around the fifth year for the parade. The Jacksonville Police Department and Jacksonville Fire Department always do an excellent job with the parade. The parade will travel from north to south then go around the square. Winner is thankful to Jacksonville Main Street, who played a key role in the re-opening of the square. He fondly remembers when the businesses in the downtown area use to be open seven days a week from 9 a.m. to 9 p.m., starting the day after Thanksgiving and staying open until Christmas Eve. “The downtown was just full of an evening,” he said.

Winner is very appreciative of the Christmas decorations designed for the downtown area by Temple Display from the Chicago area, and the work that goes into putting them up every year. “We have become quite elegant with our new decorations during the past few years,” he said. “The people who put them up, Terry Chumley and his crew of downtown maintenance, do a wonderful job of putting up the decorations.”

December 12 from 9 to 11 a.m., upstairs at the Elks Club, there will be a breakfast held with Santa Claus. Everybody is welcome to come, and there will be orange juice, milk and donuts.

The Heart of Jacksonville, which consists of individuals related to downtown businesses who have a goal of drawing people to the area, co-sponsors the arrival of Santa Claus with the radio stations WJIL and WJVO.

CUTLINE: Santa Claus is getting ready to visit all the good boys and girls this year. He will be making an appearance in Jacksonville on the day after Thanksgiving.