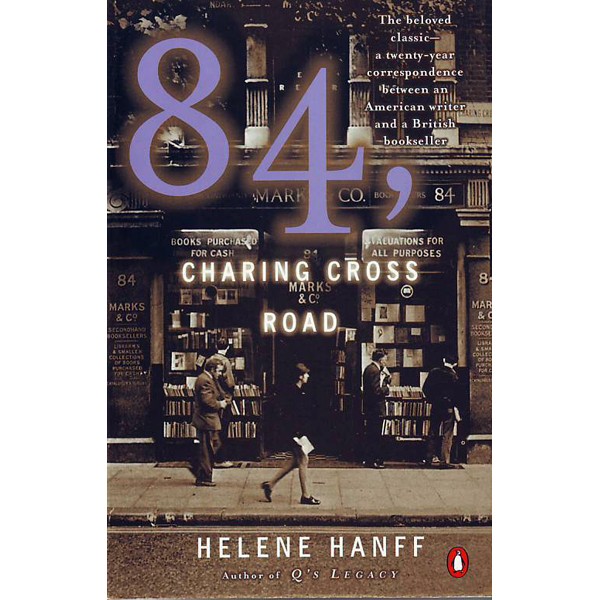 An exchange of letters between a New York City script writer and an antiquarian bookseller in London, 84, Charing Cross Road takes less time to read–under an hour–than it takes to watch the film, which runs about an hour and a half.

But be careful. If you watch the movie before reading the book, the voices of Anne Bancroft and Anthony Hopkins are likely to penetrate your mind as you read and you might have trouble picturing the bookseller’s wife as anything other than a shy, young Judi Dench. (Actually, that’s not such a bad thing, is it?)

In 1950, Helene Hanff spotted a small ad for an English bookshop in the back pages of The Saturday Review of Literature. Marks & Co. specialized in antiquarian and out-of-print books. She sent off a letter containing both a list of requests and no small amount of trepidation: “The phrase ‘antiquarian booksellers’ scares me somewhat,” she wrote, “as I equate ‘antique’ with expensive. I am a poor writer with an antiquarian taste in books and all the things I want are impossible to get over here except in very expensive rare editions, or in Barnes & Noble’s grimy, marked-up schoolboy copies.” That was way back when Barnes & Noble was a single store on 5th Avenue in New York. Imagine.

That note was the start of a 20 year correspondence between Helene Hanff and the chief buyer for the bookstore, Frank Doel. Before long, the buoyancy and humor of Hanff’s letters punctured Doel’s British reserve and a warm friendship based on common literary interests began to grow.

Rationing still existed in post-war Britain, and Hanff was dismayed to learn that families were limited to two ounces of meat per week and one egg per person per month. She began to send packages for the bookshop staff to share. They, in turn, sent family recipes for Yorkshire pudding, a handmade needlework tablecloth at Christmas, and, over the years, pictures of their growing children.

Please note: this is unlikely to happen when buying from Amazon.

Hanff and Doel never met. He died quite unexpectedly a few weeks after his last letter to her, a letter saying she would have to wait a bit for her copy of Jane Austin because hordes of American tourists had depleted their stock of nice, leather-bound books. Sadly, Hanff was never able to be one of those tourists herself. In a wistful letter to a friend in London she wrote, “If you happen to pass by 84 Charing Cross Road, kiss it for me? I owe it so much.”

We did pass by 84 Charing Cross Road ourselves a few years ago. The building still stands, although Marks & Co. is long gone and only a small plaque commemorates the correspondence of two booklovers.

The pizza smelled good, but the subtle aroma of antiquarian books would have smelled even better.