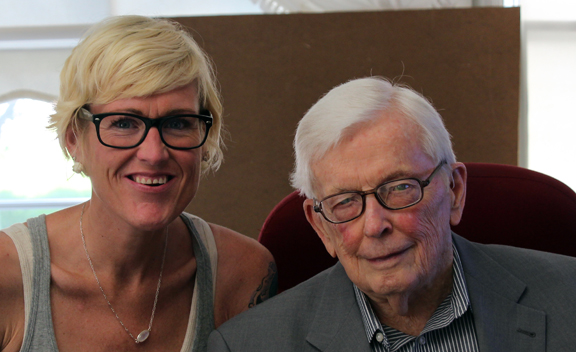 We had a discussion about newspapers, Paul Findley and me. The former United States Representative from Illinois represented its 20th District as a Republican. Born in 1921, he is a fascinating and accomplished ex-Congressman, who to date continues to be an author and lecturer. Sitting in his office, I was positively inundated with images or décor representing not only his family, but also his personal and political story.

Findley graduated from Illinois College and left for the War in January of 1943, serving in the United States Navy until 1946. It was there he met his wife, Lucille, a flight nurse in Guam. “We didn’t have any money or jobs,” said Findley, “but that didn’t matter.” After the war, Findley had a dream of getting his “own little paper – so (he) could sound off.” The Jacksonville Record was the prospective name. He was serious about getting a weekly started. Still, just as he was close to leaving for a job in Washington, D.C., Findley received a letter. Essentially, that letter in 1947 offered Findley the opportunity to buy a third of the Pike Press newspaper in Pittsfield, Ill., – and to go run it. “My life has been full of luck,” notes Findley. “It proved to be an excellent experience.” The paper gave Findley an option to have a corner politically, “a way to express (his) opinions,” he said.

Findley was elected as a Republican to the Eighty-seventh, and then to the ten succeeding Congresses. His Congressional span ran from January 3, 1961-January 3, 1983. At that point, he says, “Lucille and I didn’t hesitate. We wanted to come back to Jacksonville and make our lives here … we came here for a lot of reasons. I’m hooked.” Findley spoke of seeing the misery on television, in Nairobi or Timbuktu or what have you: “I wonder why I was lucky enough to be born in Jacksonville.”

“I don’t know I could have been happier,” said Findley. He continued with his writing and stayed close to Illinois College. “My book writing expanded my friendships (worldwide).” Much of his work dealt with politics; Findley interjected at this point in the discussion that his dad didn’t allow him to speak the names of republicans, and that Ken Bradbury was the first name of a republican allowed to be mentioned at home.

And here he is, residing in the town of Jacksonville, Ill., the town which he so loves. “If I had to live my life over, I’d run a weekly newspaper,” stated Findley. He offered his opinions as to how it should be run.

Findley noted his great respect to “my boss” for organizing The Source. (On a personal note, it feels good to be a part of something so great and local.) I asked Findley if he’d start another weekly now if he could. His reply: “Not in Jacksonville. The Source is too well established.” Our sincerest thanks, Mr. Findley.