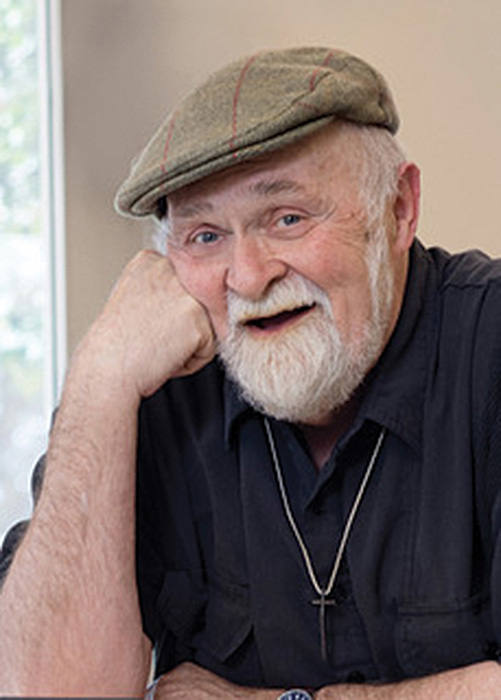 A gift makes you feel happy and loved — sometimes, you just need to shed a tear because it touches you so. That is what Ken Bradbury, affectionately known as “KB”, was in person and what he shared through his numerous theatrical writings. Whether you were involved in bringing the creation to life or enjoying the fruits of the labor by being an audience member, one thing is certain, the creative gift he shared with the world was indescribable. Even though KB passed away in November of 2018, his work from his many years as a Central Illinois playwright lives on through the work of the Ken Bradbury Foundation.

The foundation was formed in the fall of 2012 to help fund the performances of the original works he would write and direct for various organizations. These works often would be used as a fundraising avenue for that organization. The Ken Bradbury Foundation was created by Marcy Patterson reaching out to Kai Schnitker (a former student of Ken Bradbury at Triopia) and Maryjane Million (a longtime production assistant and friend). Also enlisted was KB’s brother, Keith Bradbury, and KB’s nephew, Doug Bradbury, to help with the foundation. The Ken Bradbury Foundation is focused on not only preserving his numerous original plays and musicals but also on helping to fund the performances of his works for years to come. Also, they are in the process of establishing a legacy scholarship in Ken Bradbury’s name, to be given to a student pursuing an education in theater at Bradbury’s alma mater, Illinois College.

In mid-June, the reader’s theater production of the Bradbury original, “Lilacs, Land and Long-necked Chickens,” debuted. The play is a humorous and poignant look at farm life in Pike County. It was written from information given in the interviews of many people. This including the interview with his own father, Elmer Bradbury, who was involved in the agricultural life of Pike County and celebrates the first 100 years of the Pike-Scott Farm Bureau. This fundraising production is a sample of the gift KB had, bringing everyone together for a good cause. The proceeds are helping to fund their agricultural scholarships through the bureau. The performances were held in three different locations: June 14 in Hull, June 15 in Pittsfield and June 16 in Perry. The show was directed by Maryjane Million.

Slated for this fall will be a musical review of Bradbury’s songbook. KB served on the faculty at Triopia Junior-Senior High School for 35 years and, beginning in 1979, he wrote and directed 29 original musicals that became THE spring show to see in the area. Every production would involve the whole school. This upcoming review will be performed at Triopia Junior-Senior High and feature many of the original songs he composed for these shows. Tickets will be available at Triopia when school starts in August. There will be two performances held on September 28, scheduled at 3 p.m. and 7 p.m.

Another production, “Bradbury by Bradbury,” will be presented November 22-24 at Illinois College’s Sibert Theatre. Originally staged there in November 1999, it is a collection of one-act plays that chronicle the journey of faith. It is a cross section of some of Bradbury’s greatest and most personal works. The production also includes the original “Camp Sunshine” scene that he later turned into a full-length musical. Tickets will be available this fall through Illinois College TheatreWorks, located at 1101 West College Ave. in Jacksonville.

Recently performed in Jacksonville and hitting the road in August is “Branson Bound,” which is about a group on a bus tour to Branson, Missouri. KB wrote the first act before his initial cancer diagnosis. Upon the recurrence of the cancer and subsequent passing of the Central Illinois playwright, his family asked longtime friend and actor Jim Yale to finish his work along with the help of John Love and Maryjane Million.

“I had no idea he had been working on another show and I was thrilled to be a part of it,” stated Stephanie Solterman, one of the “Branson Bound” actresses. “There were times that something especially funny would happen in rehearsal and I could just see his face with his famous head thrown back, open-mouth, eyes-closed silent laugh. Throughout our rehearsals, we always knew Ken was smiling.” The cast includes: Jim Yale, Jodi Heitbrink, Brad Barnes, Carrie Carls, Mary Beth Mullaney, Stephanie Solterman, Tammy Guthrie, Jaxson Dion, Tom Guthrie and John Love. “I think this show and production was, for me, a celebration of Ken’s life and work. It was a realization that although he won’t be writing any new shows, his shows will stand the test of time,” commented one of the actresses, Mary Beth Mullaney. “He worked with old friends and made new ones. That was one of the many gifts Ken had — bringing people together.”

The production will be appearing at the Hoogland Center for the Arts in Springfield, located at 420 South 6th St. The dates will be August 9, 10 and 11.