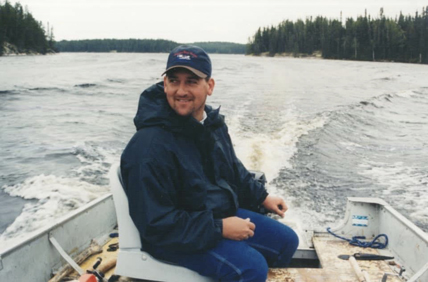 Every year for the past 20 years, the family of Bruce Robson has held a fishing tournament at Lake Jacksonville in his honor. Robson was a city police officer and an avid fisherman who tragically lost his life in a boating accident back in 2002. The Bruce Robson Memorial Bass Tournament is a way of remembering him and celebrating his life, as well as a way of giving back to the community by donating the proceeds from the event to some deserving charities.

This year, the tournament will be held on Saturday, October 22, from 7 a.m. to 3 p.m., followed by a party and live auction at Bogart’s from 6 to 10 p.m. Registration is now open for the bass tournament, with a $100 cash giveaway drawing for those who enter by October 15, to be drawn the morning of the tournament. There is a $100 entry fee per team. If at least 20 boats enter, there will be cash prizes for 1st through 5th places of $500, $400, $300, $200 and $100. Another fun prize opportunity will be a money pot for the biggest bass caught and the smallest fish caught. This is always a lot of fun and makes for plenty of laughs. In addition, each team will get a snack bag with drinks, snacks and a Bruce Robson Memorial Bass Tournament decal. One lucky fisherman will win a Falcon fishing rod as well.

The party at Bogart’s will provide free finger foods and desserts, a cash bar and a live auction conducted by Spradlin Auction Center. There will be over 100 items auctioned off including gift baskets, gift certificates, flags and a high school jersey autographed by 27 pro fishermen, among many other things. There will also be a gun raffle. Additionally, there will be a kids’ giveaway for children 12 and under, including four kids bow and arrows, four rod and reel fishing combos with tackle boxes, and many Dairy Queen gift certificates.

What started as a way to help support Bruce Robson’s daughter, Jacklyn, after his death, has really grown and taken off. At their 15th year event, they added the celebration at Bogart’s, which they will do every five years. The Robsons are expecting between 200-300 people to participate in the event this year. They have a lot of local people who attend each year — surprisingly, they have fishermen come from Springfield, Peoria, St. Louis, Macomb, and even Kentucky and Wisconsin. Bruce Robson’s brother, Glenn, estimates that they have raised approximately $55,000-$60,000 over the years. Glenn Robson is a fisherman himself, and he confesses that he has never won his brother’s tournament, joking, “I’ve finished 2nd and 5th. This is the only tournament I haven’t won.” He says that this tournament is just fun, not cut-throat. Everyone laughs and jokes and has a good time.

He states, “It’s a fun way to keep Bruce’s name out there. It’s something that he would fully respect as a memorial.”

Bruce Robson was an outdoorsman who loved fishing, hunting and anything outdoors. He was full of life, and this tournament epitomizes all that he was about. “He just loved life in general. He was a free soul,” says his mom, Pat Robson. Bruce Robson is survived by his dad, Jim Robson, who was Morgan County Sheriff from 1994 through 2006; his mom, Pat Robson; his brothers, Kevin Robson and Glenn Robson; his sister, Danette Scott; and his daughter, Jacklyn Robson Becker. Jacklyn Robson Becker and her husband, Reece Becker, have a baby boy named Warner who is named after her father, Bruce Warner Robson. The entire family makes sure to be here every year for the memorial tournament. It is a labor of love that they do in his memory. They enjoy having his friends come and share stories and laughs about the past. It is an event of which they are proud, and they want everyone to have fun doing something Bruce Robson really loved.

To register for the Bruce Robson Memorial Bass Tournament or donate items for the auction, contact Glenn Robson at 217-883-2742.