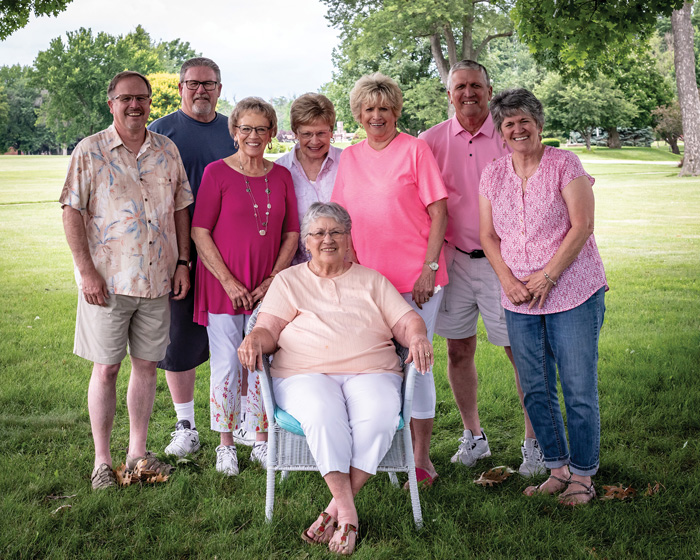 A ninety-plus year mystery is unfolding right here in Jacksonville and Grand Rapids, Michigan, involving two families named Brady and Engelsma. Without any knowledge of the other’s existence, each family has spent countless hours discussing and trying to solve the same mystery.

The story begins with a teenage boy who lived in Grand Rapids, the second child of a Dutch family named Engelsma. One Sunday morning in 1926, at the age of 16 or 17, Harry Engelsma walked away from the family farm and disappeared. His parents and siblings (eventually there were eleven children) spent the rest of their lives grieving, wondering about his whereabouts and well-being, and hoping he would return. They never again heard from him.

In the late 1920s or early 30s, a young lady named Mary Etta Cain met a handsome young man named Harry Patrick Brady at a Mission in Bloomington, Illinois. Harry was working at a plant nursery and living at the Mission, and Mary went there to practice on their piano. Although Harry shared no information about his family or where he had lived, Mary thought little about it, since the Great Depression had produced many transients and orphans. The two married in 1933 and began a family that eventually included eight children.

The Brady family moved to the Jacksonville area in 1944. In the coming years, Harry worked at Nesco in Jacksonville and also was a brakeman on the GMO Railroad. Often, he would leave for days or months at a time, leaving Mary to fend for herself and the children.

Whenever he returned, she always took him back for the sake of the kids. Then one day in 1955, Harry walked out the door without a word to his son John watching him, took his daughter Linda to school, and disappeared for the last time. With the exception of a sudden appearance at daughter Gracie and her husband Harold’s home in Wichita, Kansas, the family never saw him again.

The first solution to part of this mystery occurred in February of 1978, when son Mike Brady received a call from a man in Kansas City, who said he was trying to locate the family of his friend Harry “Pat” Brady. He informed Mike that Harry had died of meningitis. The man knew only that Harry had mentioned having a son named Mike in a small town near Springfield, Illinois. Through calls to city phone directories, he located the correct family. Sons John, Mike, and Steve went to identify Harry and brought him back to be buried in Manchester, Illinois.

For the next 40 years, youngest child Steve (Rev. Steven Brady of Champaign, Illinois) searched tirelessly to find some evidence of who Harry Patrick Brady really was and where he had come from. On various documents, Harry had listed different birthplaces and different names of his parents, and all proved to be dead ends in the search.

This all changed recently when Steve and his sister Mary K. had their DNA tested, using different companies. The family siblings hired a genealogist from Ancestry.com to conduct a search. The DNA results for both produced the names of matches of some first cousins, and almost immediately the genealogist found records of Harry Engelsma, born to Charles and Lena Engelsma in Grand Rapids.

Suddenly, the mystery began to unravel. Mary K., of Las Vegas, connected with a match in California, who knew the story of “Uncle Harry” leaving home in 1926. A facetime meeting with this match, followed by many phone calls and Facebook conversations, confirmed that Harry Engelsma and Harry Brady were one and the same! The eight children, 23 grandchildren, and numerous great- and great-great grandchildren of Harry and Mary Brady are not Bradys at all—the real name is Engelsma!

What a revelation this has been for both families involved! Some of the first cousins already have met in person, and there has been immediate bonding. The similarities among the two families are amazing, especially their faith in God, musical and athletic talent, sense of humor, and physical characteristics. On November 16, several members of the “Brady” family traveled to Grand Rapids to meet with a few hundred of the Engelsma clan. Anticipation was high in both families, and the mystery that plagued so many people for over 90 years has come to an end. Many questions will remain forever unanswered, but this will not diminish the miraculous joining of two families into one. The Jacksonville family will always be Bradys, but from now on they will be discovering their complete identity as Engelsma-Bradys, and joyously connecting with a vast new part of their already extensive family unit.