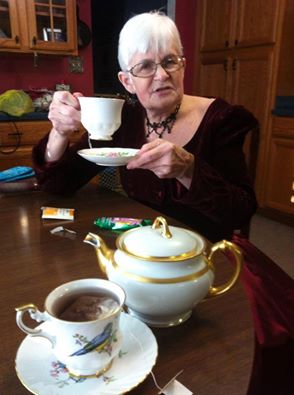 The day after Carole Crim died the bookstore hosted its monthly poetry group meeting. So we decided to dedicate the gathering to Carole, one of the group’s ardent faithful. A record number attended that night, a testament to her impact on the group, and on the community at large. I encouraged the group to share its remembrances of Carole, whose presence was felt as much that night as on any other night she might have been there in the flesh. Toasting our friend, I believe I said, “Carole’s in the house tonight.” And surely her spirit was.

If ever anyone possessed an indomitable spirit, it was Carole. Nicole Riley (owner of the coffee shop next door to otb) and I were reflecting on our mutual friend’s life. We agreed that she was neither defined by, nor remembered for her breathing problems. Her “condition” (COPD) was not “who she was.” She was a spitfire, that’s what she was. Nicole gets credit for that word, which resonates for me. I imagine someone valiantly attempting to spit out a fire. Which is similar to how it must have felt for Carole trying to catch her breath on a windy day. Impossible.

And yet Carole rarely let COPD keep her down. From time to time it got her down, but she was never down for the count. As soon as she could muster the energy to do what she desired to do, she was off in her silver Jeep Cherokee. Off to Woodlawn Farm, where she gave tours of the historic Underground Railroad site. Off to the Asa Talcott Home for an Imagine Foundation event. Off to Pilot Club. Off to…

Poetry Group. Sounds like a stuffy affair, right?  Well, certainly not when Carole was there.

Carole will be greatly missed by those whose lives she…not just “touched”…but altered. Another downtown neighbor of mine, Rhonda Kircher (owner of Just Good Trade), recounted a time when Carole went to bat for her while others faltered. Carole was not just a fair-weather friend. She was a true friend. And I know I speak for countless friends of hers when I say that my life was enriched by her singular spirit that lives on in my memory.