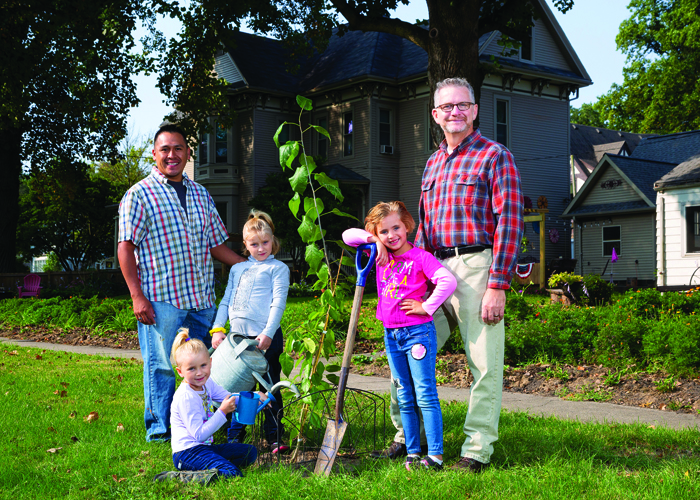 Jacksonville’s very own Jonathan Baldwin Turner (1805-1899) is recognized for popularizing Osage orange hedges on America’s prairies in the mid-1800s. Turner came to Illinois in 1833 and taught at Illinois College (IC) in Jacksonville, until 1847.  As Turner trekked across the prairie, he observed the absence of fencing and fencing material on the open prairies that was holding back progress and livestock production. Trees were inaccessible to furnish logs for split-rail fences. Farmers were constrained in their capacity to maintain livestock or much less stake out the boundaries of their land.

Turner believed that much like the lands of Europe, hedges held the solution.  Armed with simple specifications for a good fence to be bull strong, pig tight and horse high, he investigated numerous native and foreign hedging shrubs, before settling on Osage orange (Maclura pomifera) as the finest plant for the task. In four years time, a hedge of seedlings, planted 12 inches apart, was big enough and thorny enough to contain horses and cows, and as often as possible hogs.

After leaving his professorial position at IC in 1847, he established an Osage orange nursery (between Park and Webster on College Avenue) from which he marketed seedlings and his patented machine for preparing the soil and planting these seeds. He sought to promote and popularize the Osage orange hedge, and by the start of the Civil War, seed for the Osage orange was in great demand. Thousands of miles of Osage orange hedgerows took root across the Midwest by the mid-1870s.

By the mid-1880s barbed wire became widely available, and for the most part, the Osage orange hedgerows were removed.  Yet to this day we see some of these formidable structures across the region commonly known as the hedge apple row (Maclura pomifera).  And this time of year, hedge apples – the fruit from the Osage orange tree can often be found at farmers markets, garden centers and other fall festivals.

What many people in our community do not know is that one of the most valued Osage orange trees established by Turner was planted at his Evergreen Farm in Butler, Illinois.  This Osage orange specimen was something Turner was exploring that excluded the undesirable tree traits (large fruit and thorns) that many did not desire for a shade tree.  He was successful at finding and selecting a thornless and fruitless Osage orange that maintained the extremely hard, heavy wood that was durable and shrinks or swells little compared to the wood of other trees, while also providing a broad canopy for shade.

Regrettably, this original specimen—dated by dendrochronology to the year 1870—was taken down by an EF3 tornado that tore across the farm on Dec. 1, 2018.  Fortunately, for years, Guy Sternberg of the Illinois College Starhill Forest Arboretum in Petersburg, Illinois had been collecting scion wood and having it propagated at the Forrest Keeling Nursery in Elsberry, Missouri.  Out of this partnership has been developed a spectacular thornless and fruitless Osage orange called the Turner Titan.

Dr. Michael Woods—a scholar of Jonathan Baldwin Turner’s impact on the agricultural industry and formerly of Illinois College—and his family has planted a vibrant, beautiful historical Turner Titan tree near their home on the corner of Lafayette and Sandusky. A second tree was also planted by Woods and his family with his IC students Madie Budd and Darian Session in the center of the IC campus.

Woods’ oldest daughter Jaylyn Filio-Woods noted that her teachers told her that “planting a tree is an active way of benefitting everyone.”  Jolia, Woods’ middle daughter noted that “everyone should plant a tree to save our planet.”  While Woods’ youngest daughter Jewel, said she “loves hugging the tree and thinks everyone should hug a tree daily.”

Madie Budd of Arcola (a 2019 graduate of IC’s Agribusiness Management program established by Woods); remarked that “she has learned so much from Dr. Woods about the impact Turner had on her ability to choose a career in agriculture and was honored to help bring his memory back to the IC hilltop.”  Darian Session from Havana (a 2019 IC Agribusiness Management graduate); further noted, “having the chance to reestablish Turner’s Osage orange roots on campus truly connects the liberal and practical educational experiences Turner himself advocated for when seeking to establish a model of education in and about agriculture and the Land-Grant university model for people like her.”

As Woods’ family leaves Jacksonville for new adventures in New York, he reflected on the planting and noted that he hopes “it can inspire energy, faith, devotion, and courage and carry forward the name of Jonathan Baldwin Turner in a living, vital way that grows grander with the years.”

A litte more about the Osage orange tree: According to the US Forest Service, this deciduous North American native tree rapidly grows 30 to 40 feet tall with a spread of 20 to 40 feet and creates a dense canopy, making it useful as a windbreak. Young trees can develop an upright, pyramidal habit. The large, three to six-inch-long by two to three-inch-wide, shiny, dark green leaves turn bright yellow in fall before dropping.

The bark is deeply furrowed and has an orange tinge to it, and the strong, durable wood is bright orange in color.  It is recommended that only male Osage oranges like the Turner Titan or “fruitless” varieties should be planted in the city, as female trees grow fruits which can be larger than softballs and are messy and present a potential danger when they fall.