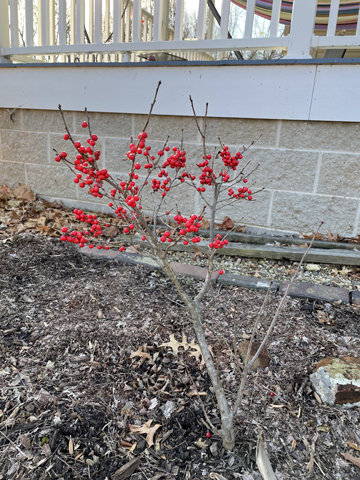 Needled evergreens like pines, firs and spruces get most of the attention this time of year. However, broadleaf evergreens like holly also make an appearance during holiday festivities. In addition to providing some decoration for the December holidays, they are also great plants in the landscape. They can provide some winter interest with their colorful berries and food and shelter for our feathered friends.

Holly plants belong to the genus Ilex, which is made up of over 800 species of plants, most of which are native to tropical and subtropical areas of the world. Holly plants can fill many roles in the landscape, from large specimen trees to small shrubs. We often think of hollies as being evergreen, and most (around 800 species) are, but there are also some, like winterberry (Ilex verticillata), that are deciduous.

Holly was considered sacred by many cultures. Druids believed that holly would guard against evil spirits and witchcraft. They would use it to decorate the inside of their homes to provide shelter for woodland spirits, who, in return, would be kind to them.

Romans used holly the Saturnalia festival that was held during the winter solstice. They would give eachother wreaths made of holly, carry them in processions and decorate images of Saturn (the god of agriculture they were honoring) with it. In the early years of Christianity, many Christians would also decorate their homes with holly to avoid persecution. Over time, holly came to be a symbol of Christmas.

In general, hollies grow best in moist, well-drained soils with an acidic pH. They can be grown in full sun or partial shade. Plants grown in full sun tend to produce more berries than those grown in shadier conditions. Since they are evergreen, it is also a good idea to site them in a location with some protection from winter winds. This will help prevent the leaves from desiccating (drying out).

Holly plants are dioecious, meaning they have separate male and female plants. Therefore, make sure you have both male and female plants when selecting plants. Otherwise, you won’t get any berry production. While it can vary depending on the type of holly grown, you’ll generally need one male plant for every 3-10 female plants to get adequate pollination and berry production. Since hollies are insect-pollinated, the plants need to be relatively close to one another for proper pollination.

Most species of holly have red berries. Berries may last on plants for three to six months or until birds, and other wildlife have eaten them. Many different songbirds will feed on the berries but often won’t do so until the berries have been exposed to winter weather for a period (being frozen and thawed), which makes them more palatable. Yellow berried plants are often ignored by wildlife until red berries are gone.

Good Growing fact of the Week: While we commonly call the fruit of hollies berries, they are actually drupes. Drupes have a hard endocarp (part next to the seed, like the pit of a peach), while berries have a fleshy endocarp.