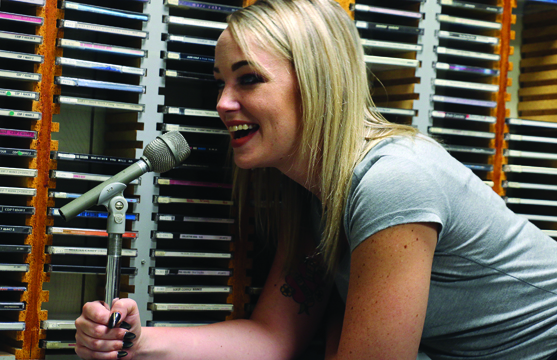 Sometimes it is good to escape, isn’t it? What better way than to turn on your radio and get lost in some good music brought to you every morning by a good friend. That is what you get with “Alexa in the Morning” on WEAI.

Since December 2015 Alexa Brickey has been the host of the morning show on 107.1. She did an internship at the radio station during the previous summer and was offered the morning slot at the end of the year. She is on the air from 6 to 11 a.m. Monday to Friday and 7 to 11 a.m. on Saturdays.

“I credit the beginning of my “DJ” career to the eight-wheeler roller rink,” reminisced Brickey. “My first job was DJing there during high school and part of college.” In addition to that experience, she ran a web radio show at Southern Illinois University at Edwardsville (SIUE). Brickey has also always had an interest in journalism. She loves writing and reporting so she pursued a degree in communications. In looking for that “perfect fit,” her mom, an avid fan of WEAI/WLDS, encouraged her to try the radio station.

When she did her internship, she worked closely with Matt Norville; also known as “M-A-double T” to his listeners. The inspiration she gained from working with him had a big impact on her career in radio. “His professionalism, his eagerness to learn and discuss, his ability to multitask several different computers, run an FM board, pick music and teach me all the same time, was always motivating” added Brickey. “I wanted to be as good as Matt. He really was, and still is, a big influence in my career.”

“Alexa in the Morning” features a wide genre of music covering anywhere from the oldies of the 50s and 60s to today’s hottest hits. Alexa works hard to make sure that her listeners get to hear something they enjoy; not playing the same artist every two hours. Not only is there music, but her show provides local and world news, special giveaways on a daily and seasonal basis and she gives people around the area airtime to promote things going on in the community.

A Murrayville native and a 2009 graduate of Jacksonville High School, Alexa enjoys promoting things going on in the area but also likes helping other interns and the local youth who come through to see the radio station and learn about a career in radio. Morgan Scott CEO class comes through and Alexa gets an opportunity to help show them what they do for a living at the station. Students from Illinois School for the Visually Impaired come in and learn the ropes as well. “A student will come in for four-week periods and sit with me while I show them how radio works,” stated Brickey. “They even get some airtime as well.”

When asked to share one thing that most people would not know about her, especially the listeners, she replied “I’m an open book, honestly. I’ll share many things with my listeners that others may not.” One example is that Brickey is in recovery from alcohol (four years now). Being open with others about her life has only helped her radio show to blossom. She is very passionate about being an advocate for women, addiction/recovery issues, equality, LGBTQ and mental health awareness.

In closing, due to the bad stigma that surrounds media as of late, Brickey wants her listeners to know that she will always have their back by providing the facts, no matter how hard and confusing things seem to get.

When not on the air, Brickey also works at Leo’s Pizza and is a full-time mom. She has three cats and one dog and if she could ever have time to herself, traveling, volunteering, writing and seeing live music are just some of the things she would have on her list.

In addition to listening to “Alexa in the Morning,” you can also follow her on her Facebook page, Alexa in the morning on WEAI. “This helps to keep the community engaged with radio in a time where technology has made it so easy to shy away from it,” concluded Brickey.