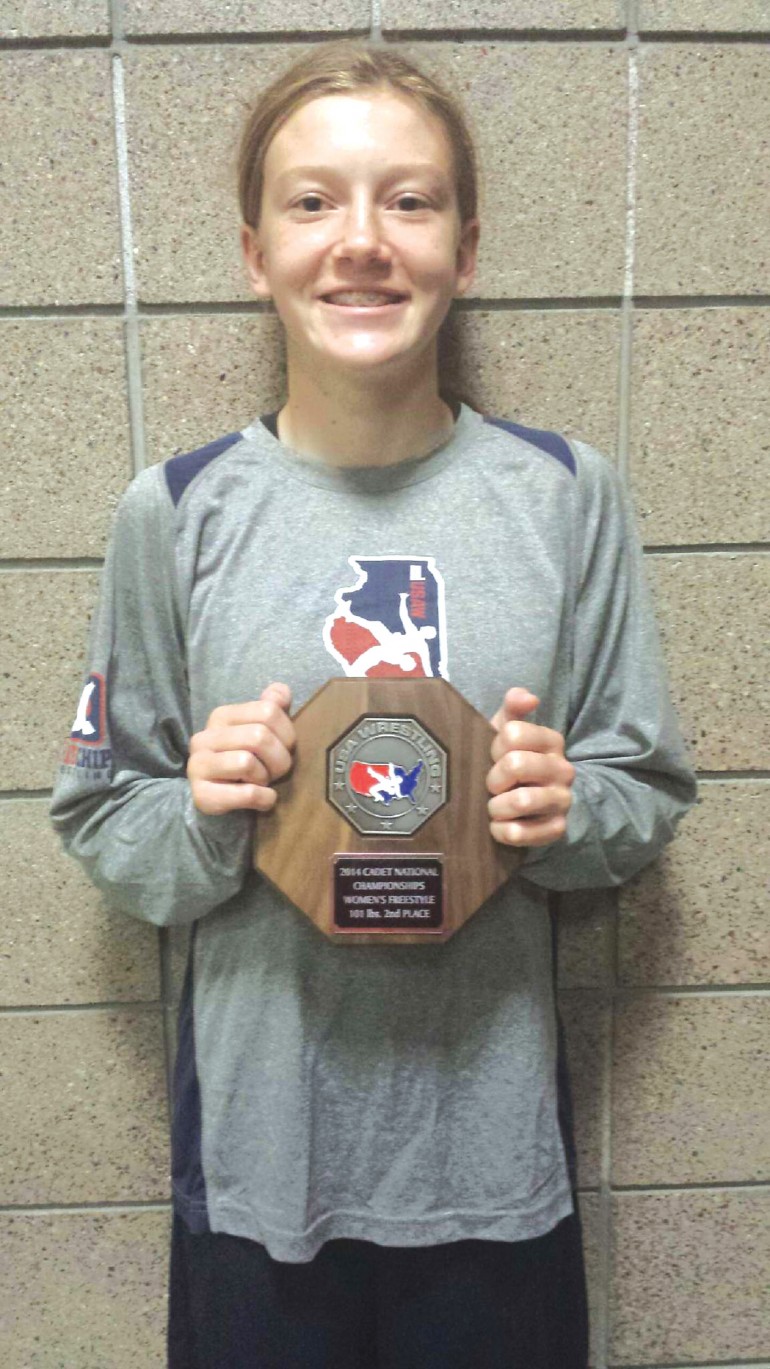 Jocelyn Murphy, a freshman at Jacksonville High School, took part in a nationwide wrestling competition for girls this summer before school. Training with her dad Josh Murphy, and her coaches Shaun Baker and Caitlyn Chase, Murphy placed 2nd in her weight class of 101 pounds. The event took place in Fargo, South Dakota, and featured girls from all over the country competing in wrestling. After making the qualifier in Chicago, where she also placed 2nd, Murphy faced eight other girls at Fargo. In her weight class, she moved up to the last match by beating all her other opponents. Losing by tech fall, Murphy stated, “I wasn’t used to the form of wrestling and different rules in the competition.” The competition was freestyle, which allows for more techniques and throws. Placing 2nd at a national level is no easy feat, and shows how far determination and focus can bring a person.

Starting at the age of 6, Murphy would spar with her brother Austin Murphy, and took up the sport soon after. Training in many gyms throughout the years, including Highlander High, Jaws, and Turner Middle School, Murphy stuck with the sport and excelled in the sport. She also had the support of her family and coaching of her dad throughout all those years, as well as the guidance of many other coaches. These coaches include Shaun Baker and Caitlyn Chase who coached her at nationals, Joe Lee and Jim Chelsvig who coached her at Turner, and most importantly – her dad, who’s been coaching her since the beginning. Wrestling for almost 10 years, Murphy has proven many times that wrestling is her best trade, competing at state for the Turner wrestling team and now making her way to 2nd at nationals. Wrestling however, is not her only interest, as she also participates in cross country, which pairs with wrestling very well. Female participation in predominantly male sports used to be foreign and an odd sight, but as the years have gone on, we’ve seen more and more of it. Murphy is a strong symbol for how far female athletes have come, and will probably continue to pave the way for future female wrestlers.

Succeeding so much in a particular area draws attention and fame. When asked if any colleges have said anything to this young athlete, she stated, “I was told to start looking into my opportunities more, and I’m looking forward to any offers.” This is a huge deal as Murphy has only just begun her freshman year at JHS. Murphy has obvious goals in mind, also saying, “I would like to at some point make it to the Olympics as a wrestler, and I’ll work for it every day.” Starting wrestling at JHS this year, it’s evident she’s looking for a state match, as well. Although there will be obstacles and challenges aplenty, and whether you’re a male or female athlete, Jocelyn Murphy proves that all that matters is true dedication. This aspiring Olympian shows the determination to overcome everything in her way, and gets closer to her goals everyday she’s in the gym wrestling.