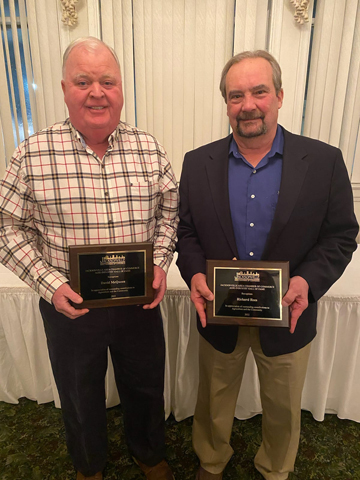 The Jacksonville Area Chamber of Commerce held the 43rd annual Agri-Industry Banquet on February 24. This dinner is a celebration of agriculture and the businesses that support this vital industry. The Chamber recognizes the importance of a strong rural economy at this banquet each year.

The Agri-Industry Hall of Fame award was presented at the banquet. The Hall of Fame was created in 1995 to honor those men and women who have given a lifetime of service to the agricultural industry through personal and professional efforts. This year, David McQueen and Richard Rees were inducted into the Ag Hall of Fame.

David McQueen has been farming near Orleans for nearly 50 years. He also is an owner/operator of McQueen Trucking and a licensed gun dealer at D&R Arms.

McQueen has been a member of the Morgan County Fair board and is a first vice president. For over 20 years, he has given his time and talents to the fair, helping throughout the year on building and land projects. Moreover, during the fair, he is an instrumental part of the organization by seamlessly wearing many hats. He opens and closes the Merchant’s Building, helps food vendors, assists with rental displays, sets up the carnival vendors and takes on parking duty for event nights.

David McQueen’s service to the ag industry in our area is extensive, with over 43 years of membership to the Cass-Morgan Farm Bureau. For years, he has given to the foundation through fundraiser donation items as well as participated in the scholarship fundraiser trapshooting event and trivia night.

He is a member of the Morgan County FSA Board and Franklin FFA alumni. His community is served by his work as the Alexander Volunteer Fire Department board president and a past school board member. He serves as a church deacon at Central Christian Church, president of the trustee board and van driver for the church elderly. He received their Sweetheart Award in 2020.

McQueen and his wife, Robyn, have been married for 42 years. They have three children (Lindsay, Mark and Austin) who are all involved in the local agricultural industry. They enjoy one grandson, Jaxson, and are expecting another grandchild any day.

Richard Rees graduated from Franklin High School in 1973 and subsequently married his high school sweetheart in 1975. He then began a 44-year career of farming/operating Evergreen Farm, which is where he grew up. Evergreen Farm is a centennial farm, which has been under Rees family ownership since 1876. His ability to develop relationships with his landlords was a tremendous asset to the community. For the past 45 years, Richard Rees has been a constant steward of the land.

Beside his actual time on the farm, Rees is a 33-year member of Cass-Morgan Farm Bureau, serving 9 years on the board of directors with a particular interest on legislative issues. He is a current member of the Morgan County Farmland Review Committee, having helped to advise on farmland assessments for the past 12 years.

He is also a participant in the National Corn Growers Association, having won first place in 1986 for no-till, non-irrigated yield, achieving 250.49 bushels per acre. As a leader in precision agriculture specialties, he was one of the first to have a yield monitor coupled with GPS technology. This innovation allowed his operation and his landlords to maximize their farm productivities. Continuing with his pioneering desires, his family farm has hosted a Monsanto/Bayer research and development site for the past 10 years. This will help insure new and advanced technologies will be available for years to come.

Rees is also community-minded, serving as a member of the Franklin Cemetery Board and a 47-year member of the Franklin Lions Club (holding the office of president twice). He has shown tremendous passion for the people of Franklin, as he has played an integral part of the groups focused on staging and maintaining the annual Franklin Burgoo and July fireworks show.

Rees and his wife, Diana, are members of the Durbin Methodist Church. They live on Evergreen Farm and he enjoys retirement by spending time at home with family, traveling, flying and working on classic cars.