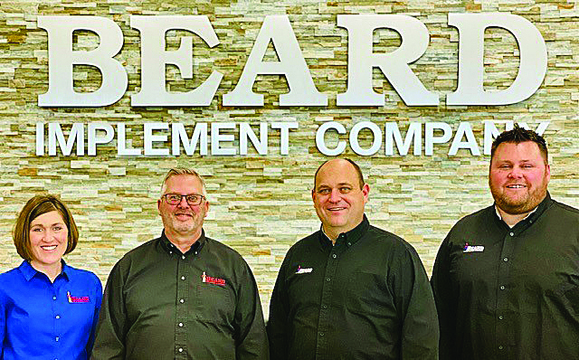 Beard Implement Company owners Gerry Beard and Kyle Schumacher have announced the addition of two principals to the structure of the successful farm implement company.

Nate McGraw and Suzanne Hobrock will assume their new roles as owners in early April as Beard begins preparations for retirement. The four will maintain ownership of the business.

“I am excited and honored for Beard Implement as these two individuals have the same desires, goals, values and outlook that Kyle and I share,” explained Beard. “We have been thoughtful about this decision and feel this is the right path forward for the company.”

McGraw has a farm implement background having most recently worked for Case IH. Hobrock has been an employee of Beard Implement for nine years serving as a controller.

“My grandfather established this business eight decades ago,” Beard said. “I know he and subsequent owners would be proud of the additions to our team as we position Beard Implement for the future.”