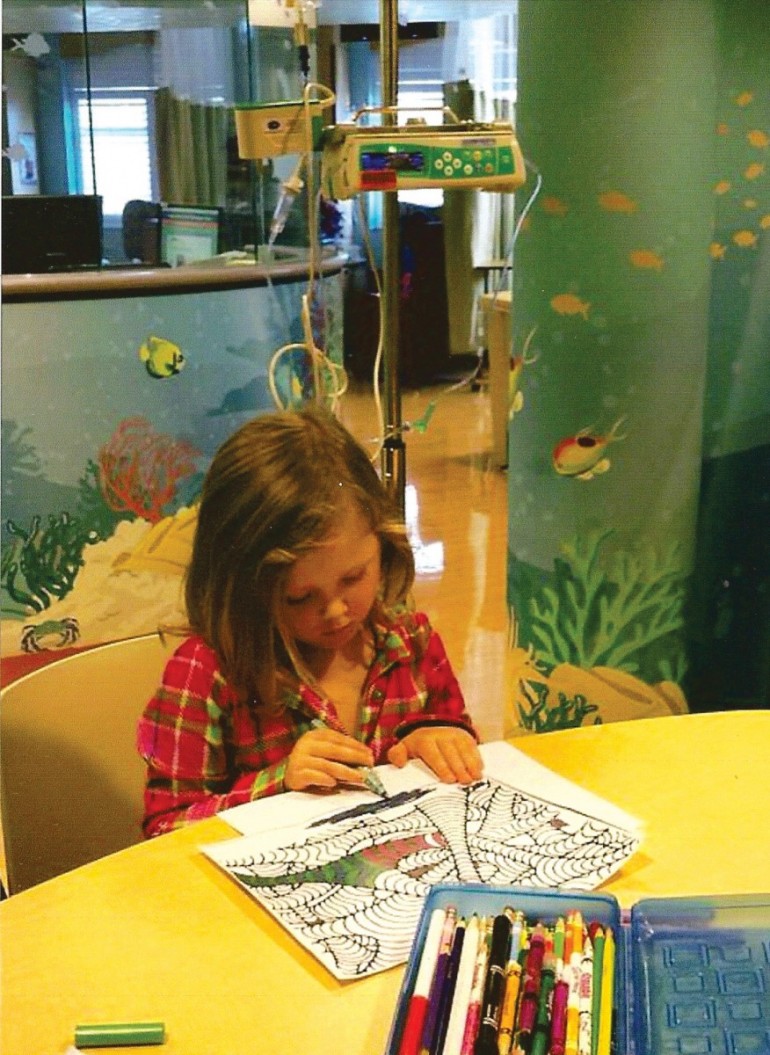 On March 28, Isabella Borgens celebrated her 5th birthday. I don’t recall the exact details of my 5th birthday, but I’m sure it was filled with caffeinated sodas and too much ice-cream cake. The life of a five-year-old is meant to be filled with joy and a carefree attitude, playing games with your friends and watching your favorite cartoons.

Bella Borgens’ life is no different. She enjoys dancing to ballet music, singing her favorite songs, riding her bike, swimming, and jumping on her family’s trampoline – quite what you’d expect from your typical preschooler. But while she shares these traits with her many peers, when it comes to things like courage, spirit, and bravery, Bella Borgens is peerless.

For Bella – starting back in 2012 – the times meant to be spent on playgrounds and jungle-gyms has instead been spent traveling from medical center to medical center, searching for answers to questions that she cannot fully understand.

“When Isabella was around 2 we noticed she had a very slight crooked smile,” said Bella’s mother Kati, “we felt that it was one of her little quirks and nothing more.”

The Borgens’ family, who’d lived in Winchester ever since Bella’s birth, soon moved to Carterville, Ill., for Kati’s husband to attend law school. In Carterville, the Borgens’ met with a new pediatrician who recognized that Bella had a slight facial droop on her right side.

“At her 4 year checkup I decided to pursue it more and we were referred to a neurologist at Cardinal Glennon,” said Mrs. Borgens, “when we met with them on June 1st [2014] they said it was nothing to worry about and was most likely a slight palsy that was congenital. They didn’t feel that an MRI was necessary at that time.”

In the summer of 2014, Bella began having trouble closing her right eye while she slept. After meeting with both an optometrist and then an ophthalmologist at Cardinal Glennon, the Borgens were told that Bella’s vision was fine, but that the doctors wanted her to wear an eye mask at night to keep it closed. Several months later, they met with an audiologist who found that Bella had a slight conducive hearing loss in her right ear – similar to what you would have with a common cold – and suggested that the family meet with an ENT to see if there was anything they could do.

Rather than travel back to St. Louis, the Borgens decided to stay in Carbondale to meet with an ENT, who subsequently told them that there might be something in Bella’s ear that’s causing the eye droop and hearing loss. An MRI was ordered for October 30, 2014, with results expected to come within the next week.

“I got a call the very next day, Halloween, from Cardinal Glennon in St. Louis telling me that they wanted to see Isabella on Monday in neurology,” said Mrs. Borgens, “I freaked out! What had they found? I immediately called the ENT to find out what this was about. He proceeded to tell me that they had found a mass at the base of her brain and that I could come in to discuss it with him more. However I was in Winchester for Halloween with the kids and this wasn’t an option.”

A week later, on November 3, 2014, Bella and her family made their way back to Cardinal Glennon to see a neurologist. After showing them the images of the tumor, the neurologist told the Borgens’ that the only way to establish what type of tumor they were dealing with was to perform a biopsy. Having noticed their daughter’s crooked smile for nearly two years, they hoped to hear that it was a slow-growing tumor, a good sign.

“That very same day the neurosurgeon came down and told us that he would be doing a biopsy/resection of the tumor,” said Mrs. Borgens, “he hoped that they could get most of the tumor out, but he told us that it was a very, very risky surgery because of its high priced location in the brain stem – located in the region that controls her heart rate, blood pressure, breathing, etc. a very critical area.

“We had a lot thrown at us, but we scheduled the surgery. My husband and I both felt very comfortable with the surgeon. However, after leaving the appointment I started researching and decided that I wanted a second opinion. When St. Louis couldn’t see us, we went to Chicago the following Wednesday.”

In Chicago, the Borgens’ met with a neurosurgeon who agreed that the tumor was most likely slow-growing, but again, it could not be confirmed without a biopsy. The neurosurgeon was not in favor of a resection given the precarious location of the tumor. Seeing also that the tumor was intertwined, he felt that the idea of a surgery – in which they would attempt to fully remove the tumor – was far too risky, especially with other treatment options available. Instead, he suggested doing a stereotactic (needle) biopsy of the tumor, which would allow them to determine what grade it was and then treat it accordingly.

The Borgens’ also consulted with a neuro oncologist from Cardinal Glennon who was also against the idea of a resection, agreeing with biopsy and then chemo as the best and safest treatment. The biopsy was performed on November 25 in Chicago, when doctors surgically inserted a port to the side of her chest for easier access during chemotherapy. Bella started chemo on December 18 and will continue weekly treatments for the next year and three months.

With misfortunes such as these, families such as the Borgens’ have a lot on their plate. Aside from the tremendous emotional tolls, there are also the financial challenges that accompany the medical care necessary in supporting Bella’s fight. And with the hopes of garnering more communal support for the Borgens’, Laura and Butch Wood, owners of Charlie’s 19th Hole and aunt and uncle of Kati Borgens, have set up the “Help A Friend” golf tournament, which will take place on June 13th at The Links golf course, located in Nichols Park. The event will also include a silent auction and a raffle drawing, with food and live music to go along.

Also with the tournament, there is an account set up for Bella at Farmers State Bank in Jacksonville, as well as a “gofundme” account, set up by Mrs. Borgens’ Gamma Phi Beta sorority sisters, which can be found at gofundme.com/bravebella.

“Many family members and friends have asked how they could help us out,” said Mrs. Borgens, “I have never felt right asking for financial help, but the expenses are really adding up and taking a toll on us. My family took it upon themselves to orchestrate this benefit and we are extremely grateful for their kindness and generosity.”

Information regarding tournament registration, raffle tickets, or questions about the event can be found on Facebook at the “Helf a friend Bella Borgens” event page, or by contacting Butch Wood at 217-473-7428