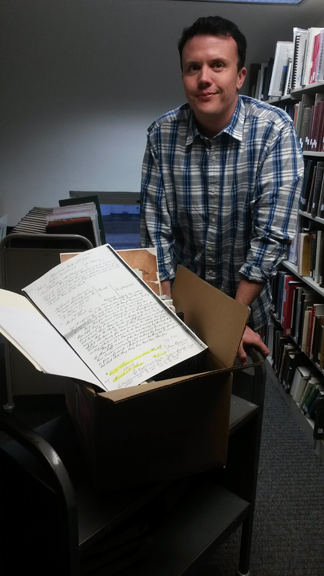 The Jacksonville Public Library will be the recipient of a new collection of work by local historian Ben Belzer. Belzer, an Illinois College graduate, spent some time interning at Woodlawn farms where he cultivated his interest in the Underground Railroad. The collection of work will include four main binders of information, a guide binder, five DVD’s, eight books and documents of a court case regarding the freedom of a slave transcribed. The documents highlight Jacksonville’s involvement in the Underground Railroad.

Jacksonville was key to the Underground Railroad for several reasons. First, Illinois was a free state between two slave states, Kentucky and Missouri. Second, we had the Illinois River leading to our Mauvaisterre Creek as transportation. Finally, the Yale Band of Connecticut were founders of Illinois College. Their passionate antislavery leadership motivated our community support.

The principal sources of Belzer’s information are Mary Hathaway on Elihu Wolcott and The Congregational Church, Art Wilson on Woodlawn Farms and the African American Laborers, Connie Charlesworth who is a local bus tour guide for the Underground Railroad, and finally Ruth Linear on former slave Ben Henderson, Mt, Emory Baptist Church and Little Africa.

The collection also spotlights other local abolitionists, who among other things gave away 500 copies of Harriet Becher Stowe’s work Uncle Tom’s Cabin to try and gain public support for the anti-slavery movement. Coincidentally Harriet Beecher Stowe’s brother Edward Beecher was the first president of Illinois College.

Area residents who would like more information can call 217-479-4144 after April 1 for bus tour details on nine Underground Railroad sites in Jacksonville. The tours will take place on Sunday, April 24 and Oct. 9.