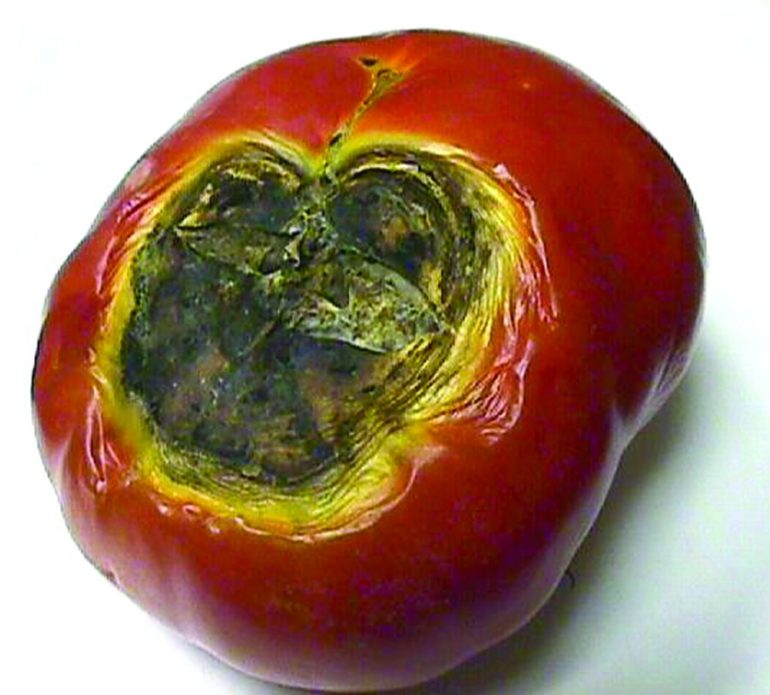 Blossom end rot is an issue many gardeners encounter when growing tomatoes, pepper, and eggplant as well as in watermelon and zucchini.  In tomatoes, it is mostly seen on larger fruited varieties with long-fruited varieties, Roma type, being more susceptible than round varieties.  It starts as a light tan water-soaked lesion at the end of the fruit where the blossom was (opposite end from the stem).  The lesion will continue to grow and eventually turn black and leathery.

Contrary to popular belief, blossom end rot is not caused by a disease or insects.  Blossom end rot is a physiological disorder caused by low levels of calcium in developing fruit.  Calcium is needed by the plant to build strong cells. There are a number of reasons why plants may not be getting enough calcium.  Just because fruit are suffering from blossom end rot it doesn’t mean there isn’t adequate calcium in the soil.  It can be caused by drought stress, fluctuating soil moisture (one reason it’s so frequently seen in container grown plants) which will reduce the uptake and movement of calcium into the plant, or rapid vegetative growth due to excessive nitrogen fertilization.

There are several different things you can do to try and prevent blossom end rot.

Second make sure to provide adequate moisture from fruit formation to maturity.  Using mulch can help conserve soil moisture an even out the moisture in the soil.

Third avoid frequent shallow watering.  Instead water deeply and wait five or more days before watering again if growing plants in the ground.  In general plants need about one inch of moisture per week, whether that is from rain or irrigation.

Foliar applications of calcium don’t help much because there is poor absorption and movement of the calcium to the fruit.   Unfortunately once a fruit is suffering from blossom end rot there is nothing you can do, so it is best to remove the fruit and discard them.