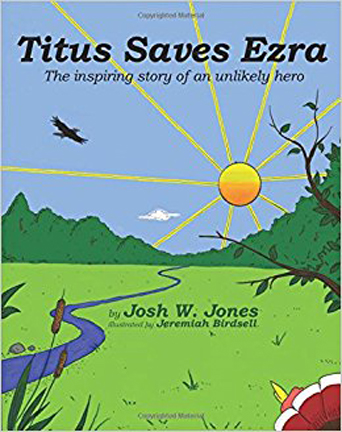 Written by local author Josh Jones, the former owner of Krush Nutrition and also the author of “Jesus Ain’t No Rock Star,” the children’s book, “Titus Saves Ezra” is a charming children’s story with fantastic illustrations. In Jones’ words, this book is an “anti-bullying, positive self-image book, that’s meant to pull on the heartstrings of kids, parents, and guardians – how am I treating people, and how am I thinking about myself when someone treats me wrong?”

In the book, Jones explains, “Titus is a turkey, and Ezra is an eagle. Ezra the eagle enjoyed a high-profile birth (picture National Geographic coverage, rare feature, lots of fanfare, etc.). In contrast, Titus the turkey is born in the middle of the woods with just his parents. Through the story, Ezra grows up with a sense of entitlement thinking he is special. Titus is just the opposite – more lowly and quiet, and although a leader of his flock, he’s very self-conscious.”

As the book progresses, Ezra the eagle descends into the flock of turkeys and begins to pick on Titus, bullying him and pushing him to look like a great eagle. In the end of the book, Ezra learns lessons in humility from Titus and has a change of his proud heart. In turn, “Titus learns that it’s not the huge, grand gestures that make a big difference in the world, it’s the small, positive gestures that have an impact,” says Jones.

Jones shares, “We’ve had unbelievable response from people – especially on the illustrations.” This response is far beyond what Jones originally imagined when he typed the book into a note in his phone in January of 2017. But he shares, “With the amount of depression and bullying in society, I really wanted to push that topic and get it out there to the earlier ages of kids, so they can think about it before they get into high school – so these kids can know that they are perfect the way that they are.”

Not surprisingly, the book is getting picked up by all people, not just kids. Jones shares, “We’ve heard so many adults, especially adult men, say that they have read through the story with ‘tears welling up in [their] eyes.’” One Marine veteran in Springfield who leads a self-defense and anti-bullying program in Springfield schools has ordered cases of the books to give to the kids that he works with. Overall, Jones shares his vision, saying, “What I wanted to do with the children’s book was present a positive message – the same message that’s in ‘Jesus Ain’t No Rock Star’ – the life and love of Christ – I want these books to exude that without beating one over the head with it.”

Jones is in the process of creating a second book in what will be a full children’s series, saying that this first book introduces the characters, and the subsequent books will explore them further. So, watch his marquee on the theater downtown for updates on new releases, or to purchase your own copy of “Titus Saves Ezra,” visit Amazon.com.