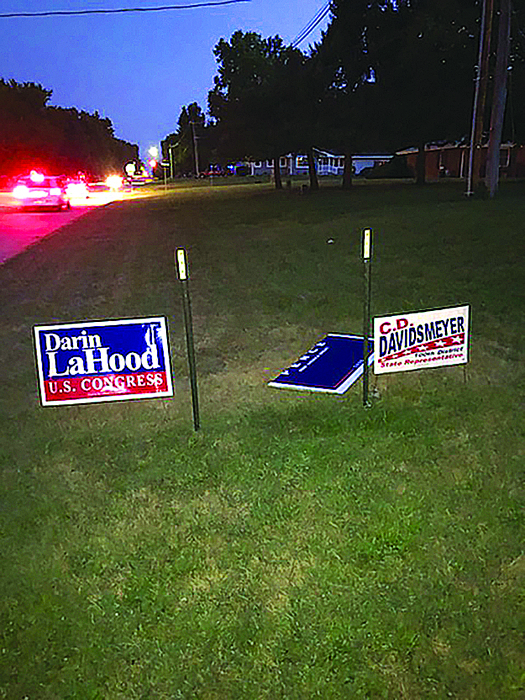 Across the country during election years, people show support for a political candidate or party by putting a sign in their yard. But this election cycle, political signs are being stolen and vandalized in yards across the nation and Jacksonville.

Ryan Zipprich serves in the local political group, the Republican Women’s Club (RWC) as legislative action and media chairman. In July, he worked to put signs out in support of President Trump. Within two days, the signs were gone. They replaced the signs after a few weeks. Days after they were put up, the signs were stolen or vandalized. On September 1, the RWC published a letter asking members to report stolen or destroyed signs to local law enforcement. Earlier in the summer, democrat candidates’ signs were also stolen or badly damaged. Morgan County Democratic Party Chair Dana Ryan said she is “personally not aware” of it going on still.

When Zipprich goes to put a sign in a yard, he goes to the door of the house, talks to the voter, and leaves his personal contact information. When the signs get stolen, Zipprich hears personally from those who lost their signs. “It’s not just a generic thing. It’s a personal connection with all those people when I put those signs down campaigning,” Zipprich added. On a sheet of notepaper, Zipprich writes the names of the people who contacted him about stolen signs. According to his contacts, 24 properties have had their signs stolen or vandalized. At least 40 Trump signs have been stolen, plus six 4×4 Trump signs. The total money value of the signs that have been taken is about $600. “No one is blaming anybody. All over the country this is happening,” Zipprich added.

Janet Hamm, the secretary for the RWC, had her Trump sign vandalized four times. She goes to bed and the sign is there. The next morning it is gone, tossed in the road, or lying in the park across from her house. She usually has four different political signs in her front yard, but none of the others are touched. Hamm commented, “It’s stealing property, it’s a misdemeanor, and it’s also an infringement on our First Amendment rights of free speech.”

Most signs that are taken are near the street. People are encouraged to move their signs closer to their houses. Fewer disappear. Many people with Biden signs have the same complaint.

American people put signs out to show support for their candidates and causes. Political signs are an important part of the election process. Americans’ views differ on who the next president should be, but in Morgan County, Democrats and Republicans most probably agree that every American has a right to freely express which candidate they support. Ryan stated, “We want to encourage lively interest in elections and don’t want anyone’s signs tampered with. We support First Amendment rights for all Americans. Denying that right is un-American and unpatriotic.”