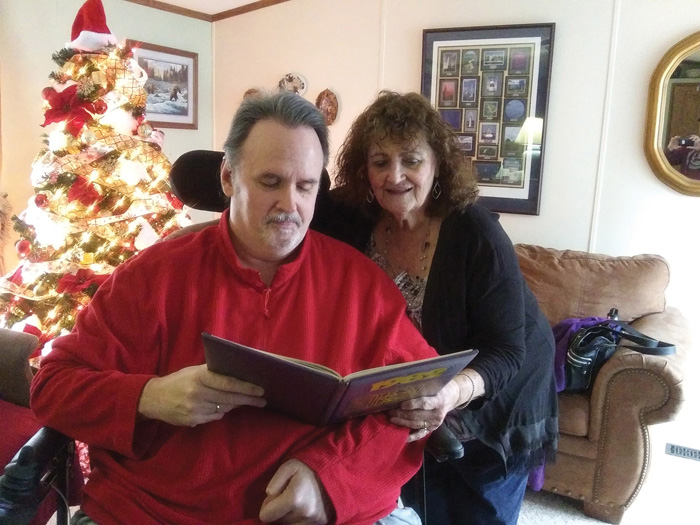 Carole Robertson (above right) and Eric Thomas (above left) recently celebrated her 80th birthday. In addition to her birthday, she is also proud to have been teaching for 58 years.

“Your career as a teacher is going to fill a large part of your life. The only way to be a truly fulfilled teacher is to do it with passion and vigor.” – Robert John Meehan, American Educator

When we think of noble professions, teaching ranks right up there. Nearly everyone can name a teacher who has helped to inspire or change our lives. They push us past our limits to see how far we can go, encourage the best in us, instill confidence, self-discipline, and responsibility. The best teachers teach from the heart and not from a book.

One local educator has spent her life bringing out the best in her students. She not only has taught others the pure joy in music for most of her teaching career, but the life lessons that she has imparted to many of her students that have been in her classes are too numerous to list.

On January 8, 2019, Carole Robertson will celebrate her 80th birthday doing what she has loved every minute of each day for 58 years. Teach.

The love for teaching came naturally for this lady as her parents were in the education arena growing up. From first grade through 10th, Robertson’s father was her principal and her mother was his secretary at the school she attended in Nebo, Illinois. She felt the tug toward education while helping a fellow classmate learn how to read.

Robertson was fortunate to start teaching in 1960 at London Mills while attending Western Illinois University in Macomb, Illinois, where she majored in music education. During her time there, she married, had her daughter and son, and was able to finally finish her studies in 1967. Upon the completion of her degree, she left London Mills and began teaching fifth grade at Canton.

After spending a year teaching fifth grade, she was given the opportunity by the superintendent to take over their vocal music program. “This was somewhat of a challenge as I was inheriting basically a vocal music program that only had four students,” stated Robertson. Canton had just built a beautiful new school and had 1,000 students. After holding auditions on the town square that first year, Robertson worked at Canton until 1972 building the vocal program and even won some choral competitions.

In 1973, Robertson’s husband Bud transferred to the Jacksonville area through his job and she began her 20 years with Triopia that fall, teaching vocal music for the school. During that time, Robertson kept active with the vocal program and the many offshoots that come with a school music program: vocal competitions, concerts, Western Illinois Valley Conference (WIVC) combined choir, plus All-District and All-State programs. “The technology expansion in the school systems in the 1970s and beyond really hurt the music programs in many school districts,” remarked Robertson. “Students had to take computer courses, making it harder to fit any of the fine art coursework into the schedule.” Perseverance and hard work kept the music program strong despite the scheduling challenges.

In addition, Robertson also worked hand in hand during her time at Triopia with a fellow teacher and local playwright, Ken Bradbury, as his accompanist for many of his theatrical productions that featured a big portion of the student body each year. Robertson even took part in a few Passavant Follies over the years; a variety show fund-raiser, written and directed by her Triopia colleague Bradbury.

Upon retirement from Triopia in 1994, Robertson decided she wanted to stay active in education and set out to re-invent her education focus and experience. In the fall of 1994 until 2000 she was an educator in the Jacksonville ESP program, an alternative educational program. “Working in an alternative program can be tough. Many come from environments that build walls from trusting others, especially those in positions of authority”, remarked Robertson. “I have always had a special place in my heart for people who need a little extra in life; a little encouragement.” The lessons that are taught go beyond the textbooks and lesson plans.

Robertson taught music at New Berlin from 2000 – 2002, music for Triopia Elementary from 2002 – 2003; Bluffs from 2003-2006, stepping down at the end of 2006 to deal with kidney cancer through 2007. She got involved with Beardstown Charter, the alternative high school, in 2007 until they closed in 2013. Beginning in 2013 until 2015 she was halftime subbing at Lafayette School in Jacksonville and in 2016 became their first call sub until today. After she celebrates her 80th birthday with the students at Lafayette she has decided to cut back.

Growing up, Robertson had no desire to pursue the more “girlie” things such as cooking and sewing and that has carried her through her whole life as she has enjoyed four-wheeling, fishing, raccoon hunting and her dogs as an outlet beyond work. Having a light-hearted time with family and friends, being active in her church, and, of course, playing the piano is very important to her. Due to her ragtime style of piano playing, Robertson was given the nickname ‘Diamond Lil’ years ago by a co-worker, a memory she cherishes.

“The rewards are endless. I run into people all the time that I had as students and I keep up with many” concluded Robertson “What is really something is to work with students that are children of former students. You just never know how or whom you are going to influence in this life.”