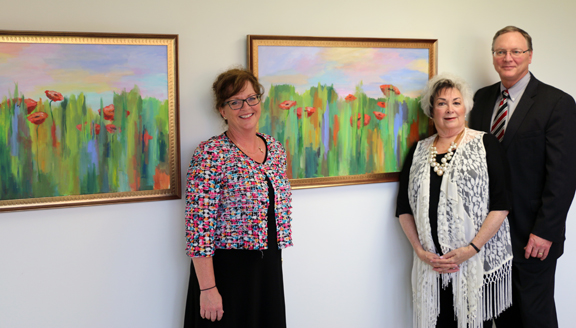 There’s a way to illuminate even small spots of brightness into what seems the bleakest situation. A project was started at Passavant Area Hospital (PAH) that involves many families hoping to project some light in what can be a dark place. PAH Executive Director Pam Martin describes, “The long hallway leading to Passavant’s Intensive/Coronary Care Unit (ICCU) was once stark and utilitarian. Through the generous act of several people, the hallway now has several benches, tables and lovely artwork.”

Martin expresses how Don Schone, of Bluffs, Ill., and his family were instrumental in starting the project to enhance the hallway’s décor, explaining that the extraordinary care Don’s wife, Glenna, received during her extended hospital stay, impressed Don and his daughter, Brenda Dean, of Astoria, Ill. “They were moved to reach out to the Passavant Foundation and asked how they might honor Glenna’s caregivers and help the hospital at the same time,” said Martin. Martin worked with the family, providing ideas on how to brighten the “stark and utilitarian” hallway. Imaginably, the hallway improvements were meaningful to the Schone Family as they spent many hours together there, positioned close to ICCU and looking out the expansive windows to the courtyard below. “It was their lead donation of a bench that put in motion a grand plan to make this important hallway more comfortable for others,” believes Martin. 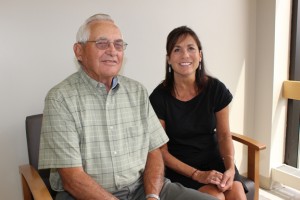 The project began to grow. Jay Hinde, of Kirkwood, Miss., became familiar with the hallway that connects the Transitional Care Unit with the ICCU, when his father received care in both units. Jay Hinde later directed an estate gift from his father, John Hinde, to purchase more benches and tables for that hallway which he traveled too often. The plaque in the hallway reads,

“ICCU Hallway furnishing and artwork were given in grateful appreciation of highly skilled and dedicated physicians, nurses and staff who cared for our loved ones.” Glenna “Shinn” Schone ~ by husband Don and family

Though visitors could take pause and sit, there still remained the plain décor surrounding them. Martin reached out to Toni Long of Jacksonville, seeking artwork created by Long. Long agreed without hesitation to create paintings in memory of her friend, Judith Beiderbecke. Long had also spent countless hours in this area of the hospital while making daily visits to her dear friend. The paintings were recently revealed and dedicated at an intimate gathering held in the ICCU hallway on June 24. As Doug Rahn, President and CEO of Passavant Area Hospital, and Terry Beauchamp, Nurse Manager for ICCU, unveiled the two paintin 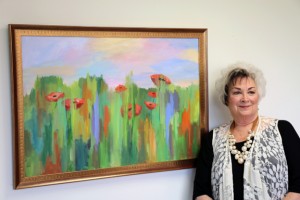 Artist Toni Long of Jacksonville stands with a smile next to one of the pair of paintings of poppies, dedicated in memory of her dear friend, Judith Beiderbecke.

gs, color and warmth were immediately brought to the stretch of walkway. Long saturated the canvases in brilliantly colored fields of red poppies (Long spoke of how Judith loved red).

Long recalls of the almost 5 months spent with her best friend, Judith Beiderbecke, before she passed away last April, saying, “Walking down the hall to see her, knowing that she was suffering, walking away or waiting in the hallway while the staff did a procedure – it was all very painful for me. The hall was a sterile and cold atmosphere with no place to sit – nothing in the area offered any comfort.” Long added that in the future, she hopes that “the walk to ICCU will not be so sad.”

“Donations continually allow for advances in patient care, as wells as, wonderful improvements to our hospital.  Patient comfort is paramount, but we also want to meet the needs of family and friends who are visiting loved ones. Their comfort is very important to us, too,” said Pam Martin. “This hallway is now certainly warmer and friendlier. We are grateful to each person for assisting our hospital, and we appreciate their concern for others.”

Additional hospital renovations planned in the coming months, says Martin, include relocation of the ICCU waiting room directly across from the ICCU entrance. More enhancements will be made to ICCU hallway when remodeling is completed.