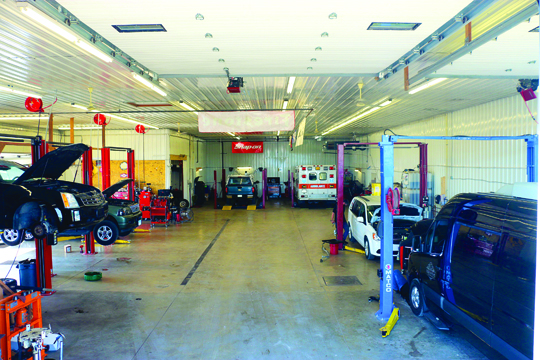 Clint Wortman, owner and operator of Clint’s Auto, thinks of his shop as “your one-stop auto shop for all your auto care needs.”

Wortman is not just the owner but is also hands-on as the lead auto technician. “What’s different than a lot of owners … most of them are in the office … all my tools are out there [in the shop], and I work in the shop every day. I’m out there every day,” notes Wortman.

It’s true. Wortman had grease and dirt on his hands (as he should) and understandably needed to field questions from staff a few times during our interview. Wortman has been in the auto industry since 2005. He explains how his interest in automotive work begins, summarizing, “Working at home in the garage … tinkering around on my own vehicles … working in the garage with my grandpa, then working in the garage with Scott Davis [the dad of Wortman’s best friend, Brian McCombs] all the time in Beardstown … spending countless nights out there. Fixing up trucks and cars with my grandpa and then selling them. I mean, I was in all the shop classes in school and went to Lincoln Land in Springfield for my associates.”

From 2007-2016, Wortman worked for local auto repair shops. Basically, Wortman worked and saved as much as possible, having already purchased most of his equipment when he made the move to rent and start his own shop. It had been something he had wanted since his teenage years. Wortman exclaims, “I’ve wanted this since I was 16 years old probably … now the dream’s all come true.”

His aspiration to own his own shop became closer to a reality in July of 2016 when he started renting his first location at 106 Ankrom Court and Clint’s Auto opened as a new business in Jacksonville. While renting, he knew wanted to build or buy somewhere, so he was always in the process of thinking ahead. As one example, he had prepared by purchasing equipment to fill the space that he knew he would have, allowing a move from a shop with three automotive lifts to one with seven.

Finally, in December of 2019, Wortman made a small move in distance but quite a large move in other ways, when he bought the real estate at 104 Ankrom Court (the previous Bob Hawks Auto Body) and expanded his business. Wortman not only went from 3,600 square feet to 10,000 square feet in space but also jumped from three total employees to nine.

“Everybody that comes in this door, they look out there and they think that’s the shop (Wortman motions to a smaller area in which some work is taking place but is not the main floor). To me, the [actual] shop is just as big or bigger than a dealership. We do everything the dealer offers. We can do computer programming, tires, alignments, tunneling, anything from a simple oil change to brake job to transmission rebuild, or an engine overhaul. That’s what I really want to get out there, is … most people think, ‘Oh, the dealer’s gotta work on this car, it’s too new.’ We offer everything the dealer does. I have all the scan tools, and everything updated yearly to new model year technology.”

Clint’s Auto is a full-service shop for diesel, foreign and domestic vehicles. The newest service offered is custom exhaust plus repair. He has also just purchased a new air-conditioning machine to do Freon in the newer model year cars. They sell tires, do aftermarket extended warranty work, and Wortman is looking in the direction of getting into buying and selling used cars. Clint’s Auto also has a “buy five, get the sixth free” card for clients’ keyrings and two courtesy loaner vehicles, with the purchase of a few more in the works. Such a convenience. The waiting room is spacious, and the internet is free. Wortman adds, “Also, since we’ve moved over here, every vehicle that comes through the door gets a free wash and vacuum.”

Furthermore, his work and efforts are showing good results. Wortman says, “Probably what makes me sit back and smile and know that I’m doing good is when I read the constant Google and Facebook reviews … that’s my thing that makes me happiest. Nine out of 10 people, it’s 5 stars, ya know.”

He also adds, “It’s good to see that people from my hometown [Beardstown] are coming all the way over here just to use me.”

“Honestly, probably one of the biggest things that’s changed since I’m on my own … it’s really changed the way I think about when I buy stuff … where I shop … because I try to keep myself within the community or buy things locally. Before I was not employed myself, I didn’t really think about that. Now, you sit back, and you see how important it is. It’s not always about the price, it’s about the service, you know. I always say now, ‘Shop local. Buy local. Spend local.”