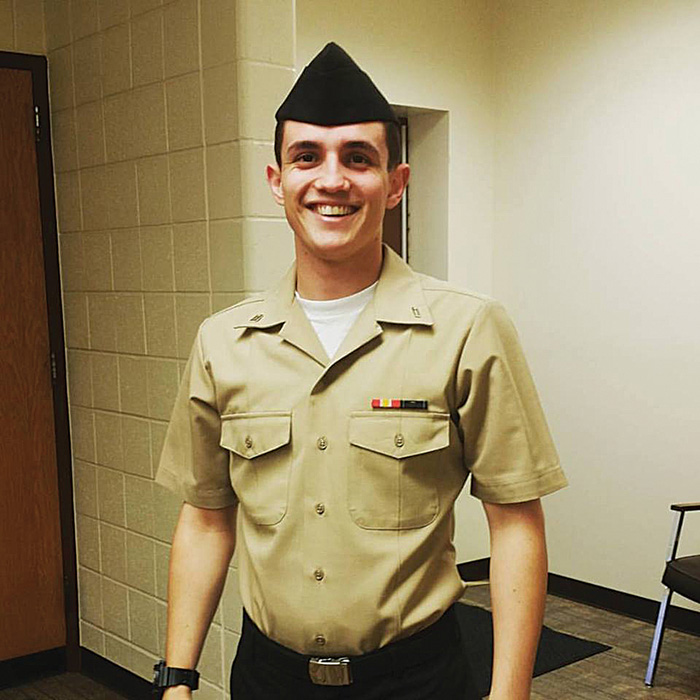 Our Veteran’s Day story this year highlights a young, local hero, who, in his own words, “wanted to put on the uniform and serve and protect.” Meet Donovan Bradley Greene, a 2016 Jacksonville High School graduate.

Greene has known what he wanted to do in life ever since he was very young – serve in the military. Shortly after graduating high school he accomplished his dream by enlisting in the Navy. How did he choose that branch? Greene chuckled, “Honestly, they were the first branch to reach out and ask me to come and talk to them.” Also, the idea of traveling all over the world and porting in foreign countries thrilled Greene.

Greene shares about one of his first jobs in the Navy, where he was originally a “waist cat,” ranking as a topside Petty Officer. In that role, he and a crew of eight others launched aircraft off the flight deck using catapults. He finished, “My job was to hook up the aircraft to the catapult, and make sure no mishaps took place.”

Today, Greene is a Petty Officer Third Class, specializing in aviation boatswain’s mate equipment (ABE3). He explained, “I am now part of a hand-picked group of people that specialize in the maintenance portion of my job. When the others finish the fly day or ‘flight ops,’ we come in and fix anything that has broken or started to leak during the day, and pre-op the equipment to get it ready for the next day …” When the ship is at port, their work changes a bit. Instead of launching aircraft, they use the time to do maintenance and deep clean the equipment.

Besides working on launching aircraft and maintaining equipment between launches, what do sailors do as they live for months on an aircraft carrier? Greene shared, “Life on a carrier is like living on a floating airport. When we are out to sea there are almost 5,000 people that live on the boat. The boat also holds up to 75 aircraft and also 12 helicopters.”

And what about food, a highly significant factor for the thousands of sailors on the carrier that are away from home for months at a time? Greene smiles, “We have two chow halls we call galleys and two stores. The galley in the front of the ship serves more of your fast food like burgers, chicken wings, fries, burritos while the one in the back of the boat serves more of the restaurant type food like baked fish, stir fry and Salisbury steak.” At the stores, sailors can get snacks, drinks, and toiletries with their ship debit cards. There are also three gyms, a barbershop and a coffee shop on board.

There are also the perks of traveling, something Greene particularly enjoys. He says, “Throughout deployment, we stop at some ports for port calls where we get to visit the country for [several days before] we go back out to sea.” His “visited countries” list is growing steadily, now including Australia, South Korea, the Philippines, Hong Kong, China, Singapore, and Malaysia.

When the ship is at sea, what’s a “day in the life” like? For Greene, a typical day starts by getting ready to be at work at 2100 (9 p.m.). The “day” begins by Greene and his crew getting a briefing on the maintenance needs and other jobs awaiting them. These might include relocating barrels of hydraulic fluid and getting the catapults up and operational throughout the night. Greene said, “After we have been briefed, we eat a quick snack and grab all the tools we need and go fix what needs fixing.”

When they are finished, they usually pre-op the catapults by venting all the air out of the system, getting correct pressures, and taking readings on various parts, including how fast, how much force, tensioning, etc. After a 12-13-hour shift, it is about time for the day crews to come in.

The night shift sailors then head back to their berthing, a room where about 50 people sleep in bunks of three beds that they call “racks.” Greene explained, “Our racks open up like a coffin,” storing all their uniforms and personal belongings. He continued, “Me and my buddies then get all cleaned up (because we are usually covered in grease and hydraulic fluid) and … go to the gym. After the gym, we eat, shower, and get in bed to start the next day.”

While their workdays are fairly routine, Greene shares that “the hardest part about living on the ship is the lack of communication we have with our families and friends.” They don’t have cell phone service out in the ocean, so they have to rely on the ships’ WIFI, and communication through Facebook.

When Green is not on deployment he is stationed in Yokosuka, Japan. He shared, “I have lived here for two and a half years now. Japan is a very respectful country and is also very clean. We live in barracks on base with one roommate and two other suitemates. We get to go out and explore Japan and all it has to offer. Japan is amazing and a place that I would like to visit again once I leave.”

In closing, Greene gave a shout-out to other young people who may be interested in military service. He said, “My advice for anyone wanting to join or thinking about joining the military is to make sure you get the job you want — really look into your job and don’t let anyone push you to do something. When you get in you will struggle at first, everyone does, but know you are not the only one. Make some great friends and get through it together.” And so together, with his fellow Navy servicemembers, Greene sails on, proudly wearing a uniform that reminds him that in every catapult he launches, and every barrel of hydraulic fluid he moves, he is doing all of it to “serve and protect” the beautiful country of America — the place that he is proud to call his home.