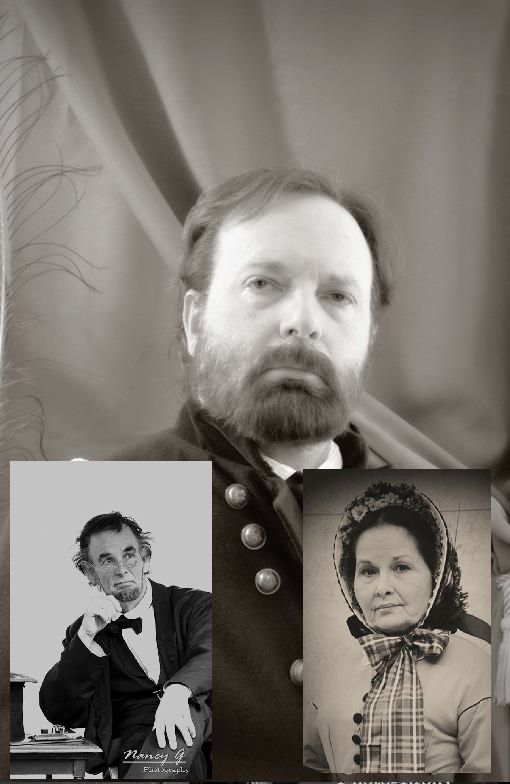 It’s Christmas Eve, 1864, and President Lincoln anxiously awaits news from General Sherman who has marched 62,000 Union troops toward Savannah with no supply lines to reinforce his troops. Six weeks have passed with no news from Sherman. A Union victory may hasten the end of the Civil War, but Sherman’s defeat might not only dash the hopes for victory, but also spell the end to the passage of the 13th Amendment in Congress. Lincoln has spent many sleepless nights awaiting word from his General.

Such is the setting for Ken Bradbury’s newest play, A Hardscrabble Christmas, to be presented at the U.S. Grant National Historic Site (Grant’s Farm) on December 19th. The one-act play features Fritz Klein as Abraham Lincoln, Pam Brown as Mary Lincoln, and Dennis Rendleman as General Grant. “Hardscrabble” was the name given by Grant to the first house he and his wife, Julia, built on the St. Louis property.

According to Bradbury, “I stretched things a bit in that Grant was actually in City Point, Virginia, on that Christmas Eve, but both he and the President were in close communication. Both of their futures depended upon word from Sherman.”

The National Park Service commissioned the play. A Hardscrabble Christmas centers on the story of General Grant. “He was a remarkable man,” said Bradbury. “He failed at nearly everything except winning the Civil War. Lincoln took a chance on him. In fact the two had never met when he got the appointment from Washington.” The St. Louis production also explores the relationship of Mary Todd Lincoln and Julia Grant. “The two didn’t get along,” said Bradbury. “In fact, Mary wasn’t fond of the General himself. Grant was a shy man and on his first trip to the White House the crowds packed in to see the little hero. Someone pulled him up on a sofa so he could be seen. It was Mrs. Lincoln’s new sofa.”

Fritz Klein and Pam Brown were recently featured in Bradbury’s two one-act plays about the Lincolns sponsored by the Illinois College Fine Arts series, while Rendleman will be playing Grant for the first time. “He’s a real find,” said Bradbury. “He not only looks like Grant, but he’s the exact height and Dennis has had a lifetime of acting experience.”