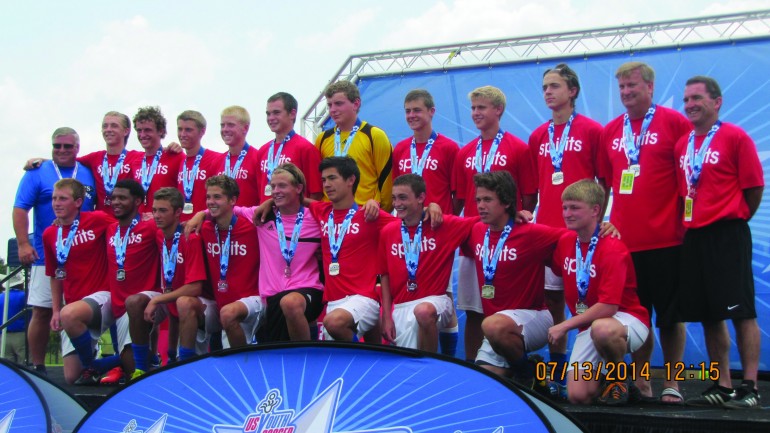 The U17 SASA Spirits Blue kicked off their National Presidents Cup Championship play against a very strong team from Wallingford Connecticut.  In game one, Ty Rogers and Eric Heuman each scored as the SASA Sprits Blue played to a 2-2 tie with the Warriors (CT).  Game two of the preliminary round included back and forth scoring as the Sprits trailed the Cape Coral (FL) Cyclones 1-0 and 2-1 during the match.  Tyler Vogel hit a well struck shot from 20 yards in the 83rd minute to level the score at 2-2.  As time wound down, it looked as though SASA would have to settle for yet another tie.  And another TY is what SASA got.  In the 89th a ball from outside the penalty box near the right touch line was sent towards the goal.  Ty Rogers made a leaping bicycle kick to send the ball past the Cape Coral keeper and put the Cyclones players on their knees in disbelief.  The 3-2 victory gave the Spirits Blue a 1-0-1 record.  On Saturday morning, SASA would face an unbeaten LV Neon 97 team from Nevada.  The Neon 97 took an early 1-0 lead with a goal in just the 3rd minute of play.  A goal from SASA’s Blake Dannehold would tie the match 4 minutes later and played continued tied until a Neon 97 goal late in the first half led to a 2-1 deficit for the Sprits Blue.  SASA would trail in the second half by a margin of 4-1 before Tyler Vogel would score in the 88th minute to cut the lead to 4-2.  LV Neon would score again in the closing seconds to win the match 5-2.  Although the SASA Sprints Blue lost the match, a record of 1-1-1 was enough to place 2nd in the pool and play for a championship on Sunday, again against the LV Neon 97.  The Spirits Blue would represent their state and club well on Sunday holding the LV Neon 97 to just one goal in each half and a 2-0 loss that would place them 2nd in the National Presidents Cup tournament.  The play of Ty Rogers did not go unnoticed by the coaches in the pool as he was selected MVP of the U17 division of this prestigious national tournament.