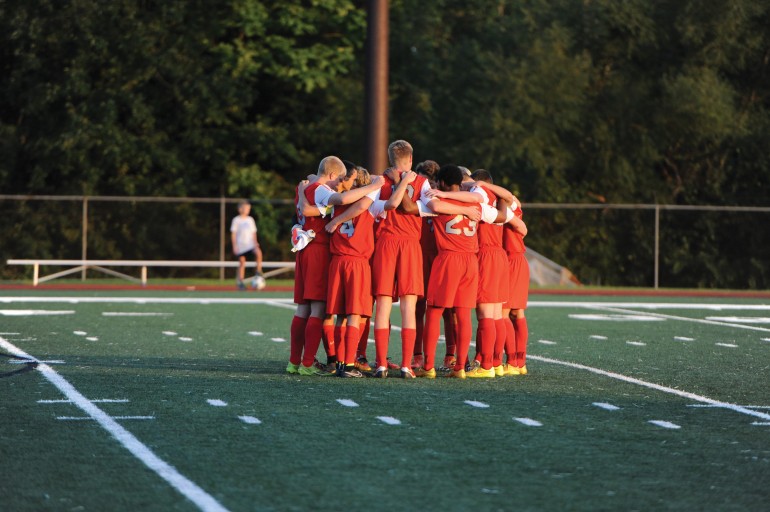 Sports are full of superstitions –  believing that certain actions or inactions are responsible for the causation of a specific outcome. Athletes will repeat the same rituals as long as the results remain positive. To the credulous mind, they appear justifiable. But the truth about sports – the beauty of sports – is that they occur in reality, and the real difference between winning and losing, is determined on the field alone. This is a fact that the Boys Soccer team at Jacksonville High School knows well. A team that believes in neither luck nor gimmicks, but rather their own abilities.

Through the first 12 games of the Fall 2014 season, the Crimsons hold a perfect record of 12-0. They average more than 5 goals per contest, and have outscored their opponents 61 to 7 (!). With a high-powered offense lead by Senior forward Ty Rogers, and a seemingly impenetrable defense anchored by goalkeeper Austin Enz, the Crimsons don’t appear to be slowing down anytime soon.

“Our guys have had a chip on their shoulder dating back to last year when we lost to Chatham in the Regional Finals” said head coach Evan Philpott. “Heading into this year, they knew what they were capable of. They knew there were high expectations, but they accepted those expectations, and we’ve had a lot of guys step up.”

Soccer is a game of synchronization – multiple parts moving and operating together, at the same time, as one single unit. Possession changes hand in an instant. The timing of a run, the placement of a cross, knowing where a teammate will be without having to look, these are the ingredients for quality soccer.  Communication and familiarity determine how well or how poorly these critical aspects of the game are executed, and in the case of the 2014 Crimsons, they lack neither. With 14 of the 23 roster spots occupied by members of the senior class, developing the necessary harmony began long before they donned the Crimson Red.

“The majority of our team has been together since about 4th grade (at Eisenhower Elementary).” said Senior Ryan May. “So we have the advantage of knowing each other and knowing how each persons plays.”

Yet while most of the Crimsons have played together in some capacity prior to this year, one key member of the 2014 squad arrived not only to Jacksonville High but to the United States, just a few months ago. And he has wasted no time finding his niche.

Meet Jose Raccousier, Chilean exchange student and starting midfielder for the Crimsons. Adding to the plethora of playmakers the Crimsons already have in Seniors Nathan Foote, Ryan May, Cooper Moore, and A.J. Underwood, Raccousier’s immediate impact is evident in his 4 goals and 12 points just 12 games into the season.

“With a kid like Jose who really knows the game, he fits right in with us.” said May.

As mentioned previously, Jacksonville’s goal differential is an eye-opening +54. And much of that can be credited to the dynamic play of the aforementioned seniors. Ty Rogers leads the team with 21 goals and 45 points. Ryan May, the scrappy midfielder who seems to be magnetically attracted to the ball, leads the Crimsons with 16 assists to go along with 4 goals. Midfielders Nathan Foote and Cooper Moore also have 5 goals a piece, while Austin Enz’s netminding has produced 8 shutouts. Not to be forgotten is the play of sophomore Steven Albers, whose 15 points are good for third best on the team behind Rogers and May.

While Enz has been an efficient backstop thus far, a keeper is only as good as the defense in front of him. In certain circumstances, protecting the 18-yard box is the job of all 11 players, but at other times its up to the trio of seniors in Will Fenner, Cody Hadden, and Zach Dewitt. Equally important to protecting the net is the play of Junior Mark Wilson and Sophomore Brandon McCombs.

Despite what other sports analytics might say, soccer is the ultimate team sport. It takes all 11 parts working together to both produce goals and prevent them. When it comes down to it, Jacksonville’s 14-1 season thus far is not the product of individual play nor superstition, but rather of a good team playing the ultimate team sport the way it should be played: as a team.