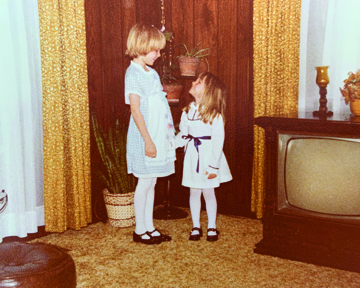 Twenty years ago, I was awakened in the middle of the night by a call from my father. My sister Shelley had been hit in a head-on vehicle collision by an elderly man who had driven the wrong way on I-72 for 20 miles.

Shelley had been Christmas shopping in Springfield that night and was headed home at the time of the accident. Hazy, I asked my dad, “Did Shelley make it?” The most cavernous “No” I will ever hear in my life followed. My sister was dead. That “no” still sits jammed sideways in my right ribcage somewhere between my sixth and seventh rib and can be felt every time I exhale. I learned that day to never fully exhale.

Shelley was my only sibling. On the day she passed she was 28 and I was 24. I was in my first few years as a graphic designer and I was just getting the hang of being an adult. That morning, with no inkling that this would be a day unlike any other, I had wrapped my sister’s Christmas gift and placed it under my very first Christmas tree.

Since then I have carried that wrapped box with me to five different homes and placed it on the top shelf of five different closets where I have looked at it every single day. The Bath & Body Works fragrance inside that package, Country Apple — her favorite, has since been retired and brought back as a “novelty retired scent” twice. That is how long I have lived without her.

I became a wife and a mother without my sister by my side. I navigated a terrible divorce, rebuilt my life, and watched my sister’s daughter grow to be a woman who looks so much like her. In that time, the “pulls” I feel toward my sister have never let up; the longing to reach for the phone when something hilarious or bizarre happens within our family, the need to share big news about my own life with her, the urge to crawl into bed with her when someone makes me cry. My brain has processed life without my sister in it for two decades now, but my heart has not gotten the memo.

Where does a sibling’s love go when it has no sibling to connect with? It lingers and it becomes quietly pitch-black private — so private, it almost feels special in its exclusiveness. A Dead Sister Club, if you will. My childhood memories with Shelley are now on a reel that plays secretly inside me when the house has gone dark and silent. Occasionally something will spark that reel to play during my daily life. These are the days when I wish that my family would go quiet around me so that the memories of my sister could feel sharper. These are the days when I know my loved ones feel my disconnection. I do not tell them why.

I quiz my children every few years to make sure they still know my sister’s name, how much older she was than me, how she passed. And each time I do this, I am painfully aware that these are mere memorizations for them. They will never witness the flesh of my role as a sister, never see me be playful with their aunt, or watch us laugh at their grandmother together. To my children, I am an only child.

I struggle to place my sister in new friendships. To the question, “Do you have any brothers or sisters?” I grapple for the right answer. “Yes, but my only sister was tragically killed in a terrible car accident,” creates one Hell of an awkwardness in an introductory setting. I know this because I keep trying it over and over. To answer, “No, I have no siblings,” would feel like a horrible betrayal.

Sibling bereavement is one of the most neglected types of grief. It is a silent, private sadness that becomes a hidden scar which creates a chasm between the person grieving and the rest of the world. It is fodder for depression and anxiety, to which I am no stranger. I wear my Dead Sister Club marks on the inside like an invisible badge that speaks to me over and over, “You’re not exactly the same as other people.”

I once heard this kind of grief labeled as “Sudden-Onset Only Child Syndrome”, but sibling survivors are not only children. We were programmed and raised as siblings and that makeup never changes. We are siblings forever. Which means we are destined to feel forever lopsided without our sibling counterparts.

If you have met me in the last 20 years, you probably have not heard me say much about my big sister Shelley. I do not love to bring her up. Part of me does not like the awkwardness it creates or the pity it draws. Another part of me feels these memories with her are far too precious to be watered down by sharing them with someone who can never really feel the connection. After all, my sister and I were a dynamic childhood duo, and none of you were in it. I have been told that withholding sharing like this puts distance between me and the people I love, and I accept that as it is. Those are the dues of the Dead Sister Club.

Despite all the things I will never say about her, there are some things I am okay with letting you in on.

You should know that my sister and I shared magic in our quaint childhood attic bedroom doing headstands on our beds and jumping across “the moat” between the two when we were supposed to be asleep. You should know that we loved Bo and Luke Duke and swapped dibs on which of them we would marry regularly. You should know that we lived for Casey Kasem’s Top 100 every New Year’s Eve and that on nights when my mother made lima beans, we tricked her into letting us eat on tv trays in the living room so that Shelley could eat mine and I wouldn’t have to. You should know that we never went to bed without setting our blankets straight using the “Neat neat cover thing” method and that we got up on weekend mornings and made legendary cushion forts from multiple rooms of furniture and spent entire afternoons in there, just wiling away the day being sisters together.

And you should know that sometimes I am still in that fort, trying to be sisters with her, and on those days, you are not invited in. You will feel it, but I will probably never tell you why. That space is only for me and my dead sister.