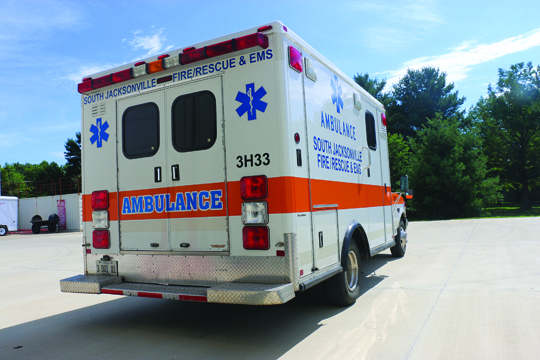 A four to one vote by the Village of South Jacksonville Board of Trustees on July 2 was the final tally deciding the fate of the village’s ambulance service at the end of July.

The board voted in favor of defunding the service. In the case that a tie would have occurred, the deciding vote would have been turned over to Village of South Jacksonville President Harry Jennings, who stated he was “in favor of keeping the ambulance, at least for another year to see if there was a way that we could increase revenues.”

With an odd number of board members, however, this was not a possibility. Trustee Tom Jordan was also in favor of keeping the ambulance and was the one no vote on July 2.

The fate of the ambulance has been in discussion for some time, with many options and ideas having been brought to the table of the Village of South Jacksonville Board of Trustees. It came down to fully funding, partially funding or defunding.

To run through the numbers provided to The Source Newspaper by the Village of South Jacksonville, the ambulance department required $14,000 total in the 2018-2019 fiscal year from the general fund. That is $1,166.67 per month, or $0.36 per resident per month, making the annual total for each resident $4.32. When you compare that $14,000 to the total budget for the Village, it is 0.2 percent of the total budget and 0.5 percent of the total general fund budget.

For the 2019 fiscal year for South Jacksonville Fire & Rescue, 50 bills were sent out totaling $36,828.40. Of that, $12,312.13 was paid while $16,217.06 of that balance was written off between public aid and Medicare, still leaving $8,229.21 due. Those balances go to collections and remain in accounts receivable, says Village of South Jacksonville Treasurer Tiffanee Peters.

Also, in a 2019 audit report (available in financial documents under the operations tab on www.southjacksonville.org) for the year ending April 30, 2019, the Statement of Revenue, Expenses and Changes in Fund Net Position Proprietary Funds lists the final operating income for the ambulance fund as $384 – not a loss.

However, it is not that simple. Village President Jennings talks about some of the reasons discussed, including ambulances generally being private entities versus public entities. Plus, the ambulance itself is older. “The ambulance we have is at the end of its life, so if we would have kept the ambulance service, it would need a new ambulance before much longer. So, that’s another cost that would have to occur.”

The numbers for that would be in the $80,000 ballpark. They nixed that right away, says Jennings, and contemplated funding the service for another year while looking for ways to make it more revenue-generating … essentially making do with the ambulance they had and coming up with a better plan.

The extension of a year made the budget number $26,300, says Jennings. “That said, even at $26,300, you’re higher than your $14,000 number that you had last year, but you’re still not at $26,300 because the $26,300 out of general fund still creates some revenue even if it’s not 100 percent self-sustaining. So, probably at the end of the year, it would have been close to that 12 or 14 thousand dollar number of what it would cost the citizens to have that ambulance in town because of the revenue that it does bring back in … if it didn’t break even, it probably would have been fairly close,” explains Jennings.

Jennings notes that their ambulance ran a lot of calls out of town because of mutual aid calls and so there was not always a backup ambulance in South Jacksonville. He notes this because he wants people to know that now with the ambulance being defunded in South Jacksonville, there are still Advanced Life Support/Basic Life Support (ALS/BLS) paramedics “We still have those same personnel and people on scene will still get that same ALS/BLS treatment … they’ll get it through the fire department and rescue … they’re still going to be there … so, if anybody’s worried that, ‘Oh my gosh, there’s just nobody going to show up’ … it’s still the same people going to show up, it’s just going to be a different vehicle and that vehicle can’t haul you to the hospital … but they’re giving you the emergency first aid that you need.”

Jennings adds, too, that “the volunteers from the SJFP (South Jacksonville Fire Department) offered to forgo any pay from operating the ambulance service if the Village kept it.”

Though defunded, “We haven’t yet dissolved it,” says Jennings.

South Jacksonville Fire Department SJFD Chief Rich Evans Jr. says of the defunding, “It is going to put some strain on us. Since August of 2008, we’ve always had an ambulance in our firehouse as a backup unit, so that was a sense of security for us and the community, knowing that if LifeStar is busy, that we do have a resource to fall back on … it has served several communities, not just ours and I think that was part of the board’s concern. To an extent, I do agree and understand that this service could better serve the citizens of South Jacksonville. At budget time, when they bought this concern up, I didn’t disagree with them at all … we’d have to do things a bit differently and come up with a different strategy of how we’re running calls out here. We’re short-staffed during the daytime. One of the things I asked the board was, can you go ahead and fund us this year and allow us some time to come up with a plan and ideas to make this work … find a few more people to help run calls … to make this work. We were working towards that way … but, it just takes time.”

Evans says they will still be providing non transport Advanced Life Support in their community. After July 31 the community will be in a position to not have transportation available when the other ambulances are out on emergency calls or transports. Then, it could boil down to a life or death situation, says Evans. With the defunding, the SJFD is looking for volunteers. Evans says those interested can go to Village Hall at 301 Dewey Drive to fill out an application.

Jason Shumaker, operations manager at LifeStar Ambulance at the Jacksonville branch says, “I hate to see it go. They’re a vital asset to the surrounding area. We are working to see what we can do to make it better. There’s more that we’re going to have to do … the biggest hurdle that we’re going to have to overcome is manpower … there’s just not enough paramedics out there. We are working to fill open positions.” LifeStar has three staffed ambulances on most days. “It can depend on the day … it is going to be a hurt on everybody (surrounding ambulatory services). It’s going to be a big loss,” says Shumaker.

Village of South Jacksonville Trustee Todd Warrick says that at the time of the vote, his choice was to defund the ambulance.

Warrick questioned former Fire Chief David Hickox and has repeated the question to current Fire Chief Evans, asking both why a firetruck was responding to EMS calls when the Village has had an ambulance all that time. Warrick looked at monthly reports and saw most calls going to mutual aid (out of South Jacksonville).

He asked in a letter, “Should Village residents have to pay for an ambulance service that benefits non-residents the majority of the time? I am in no way saying that the ambulance is absolutely no benefit to the Village residents, but again, do we continue to service other communities at the cost of Village taxpayers for the expenses that are not reimbursed by insurance or private pay?”

Warrick says he has never received an answer to his question from either the past or current chief. He does note, though, that “If the Village residents want an ambulance at their service, then I am sure that we can come up with some plan to fund it.”

South Jacksonville ambulance only responds when another ambulance is not immediately available when an individual calls 9-1-1. McCarty said, “with the loss of America Ambulance (that provided two transport ambulances) and now South Jacksonville, the volunteer agencies across the county (and the country) continue to struggle to maintain the needs of their communities with the volunteers in the rural services. We are planning a meeting with key personnel to come up with a plan that meets the needs of our entire county.”