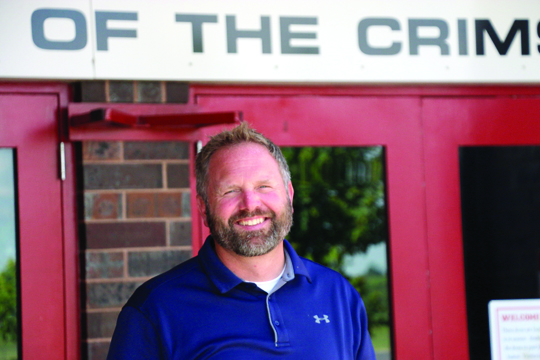 On July 1, Joey Dion will officially step into his new role at Jacksonville High School (JHS) as principal, filling the position of Andrea Lee. With a strong background working in school systems, including the last five years at JHS, Dion was a plausible candidate for the job.

Born and raised in Carthage, he came to Jacksonville in 1996 to attend Illinois College (IC). He graduated in 2000 and married Abby (Crawford) Dion in 2005, followed by teaching stints in Beardstown and Athens. Dion said although he had been teaching and coaching, he had really wanted to get into an administrative role. So, he and his family moved to Carthage in 2009 and Dion began his first administrative job back in his hometown, holding the positions of assistant principal, athletic director and transportation director. “It was a compliment … I mean it was an administrative job, but it was tagged with athletics which I felt like I had a good handle in … and then transportation, so it was a good opportunity to get involved with the transportation side of Illinois education which is very detailed,” said Dion. After five years, they returned to Jacksonville and Dion was the principal for the 2014-2015 school year at the Lafayette Academy. Dion jumped in with his discussion, saying emphatically, “Great experience.” He continued, “Over there, it’s the underdog. You’re dealing with different types of issues … and I had been there a little bit … right out of college, I’d worked there a little bit so it wasn’t new to me. I’ve always been a fan of the underdog. I had a good experience over there.” However, Dion was only at Lafayette Academy for that one year, he says, because the assistant principal and athletic director position at JHS had opened up. For three years, Dion held that dual position and then two years ago, he became the associate principal, which has been his role to date. It is “more discipline … safety of facility,” noted Dion.

Now, with Dion starting his sixth year at JHS and Lee leaving June 30, the principal position was going to be a vacancy that would need filled. “I feel like it’s been a successful opportunity, so then I had a few conversations with Mr. Ptacek … and he was in conversation with the board of education, and then he called and offered it to me … it was documented in last Wednesday’s board meeting, the 17th. I think it’s kind of been a progression of … [Well,] there’s four main administrative roles here right now … so, of now the four … I will now venture into the main office to be the principal, but I’ve done the athletics and I’ve done the discipline of this. So, it’s just been a lot of afforded opportunities, fortunate to have done a few of the administrative roles in the building where, you know, you hire good, competent people and allow them to do their job, but I also have some working knowledge of what goes on in those offices.”

“As it sits right now, if we were to return to normalcy … the 18th [of August] would be the first day of pupil attendance,” said Dion. Of course, these have certainly not be the most normal of times and understandably, there are not final decisions for the coming school year at this time while Illinois waits for announcements from Governor Pritzker. Dion explained, “We’re kind of at a standstill. I mean, we’re having a lot of meetings … We just continually are having conversations about what that might look like …We’re waiting for some direction from the Governor and the State for what our path looks like.”

Regardless of how the school year starts, Dion has some goals as principal. “Obviously, I want to continue to provide leadership for the high school. In my opinion, we have dedicated and committed staff that are here for the right reasons; they work hard for our students. Collaboratively, I want to work with all of our offices and our teachers just to make sure we’re doing our best to educate each student.” As far as areas that need improvement or where he’d like to simply see improvement, Dion was said, “The answer is yes. We have to continually evaluate … but I also want to say that I think Andrea [Lee] is fantastic and she was doing a tremendous job … I want to assess not only my ideas, but sit down with the leaders of our building and find out what they think and target those areas.”

In his final remarks, Dion stated, “I have been very impressed with Jacksonville School District, the procedurals and the people involved. I’m thoroughly enjoying my time in Jacksonville, Illinois; they’ve been very welcoming … I’m excited to see where this new challenge, or this new adventure, will take me. Looking forward to the opportunity. Honored for the opportunity.”