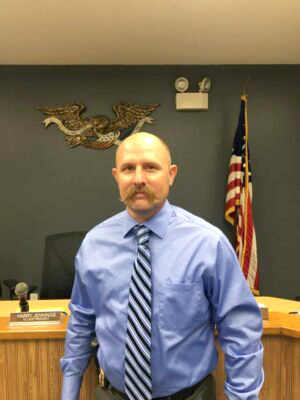 With a combined total of 51 years in law enforcement, the new Police Chiefs for South Jacksonville and Waverly are taking their experiences to a new chapter for both themselves and their departments.

Eric Hansell took over as Police Chief for South Jacksonville in September 2020. He started his career in law enforcement as a part-time dispatcher with the Jacksonville Police Department (JPD) in January of 1996. He was able to work into a full-time position but by August 1999 he was attending the University of Illinois Police Training Institute and began working with the Winchester Police Department as a patrolman. In June 2000 he was hired as a patrolman with JPD. While serving the citizens of Jacksonville he was promoted to the rank of sergeant in October 2010 where he worked both day and night shifts. In June of 2014 he achieved the rank of lieutenant.

Serving as the new Police Chief for Waverly as of November 2020 is Chris Johnson. Johnson began his career in law enforcement in 1993 as a correctional officer with Morgan County Sherriff’s Office. In September of 1995, he began working with JPD. At the end of his JPD career, he had achieved the rank of Patrol Lieutenant. In this position, he was assigned to a patrol sergeant and a squad of patrol officers overseeing the day-to-day, call-to-call operations of the department.

Beginning a new chapter in their law enforcement careers, both Hansell and Johnson have similar goals. “This will give me the opportunity to spread my wings as a leader and challenge myself as an administrator,” stated Hansell. “Training is a top goal for me. I want the officers to receive the best training possible and to expand their horizons. I want to push them toward their career goals and help facilitate their success.” Other goals include cross-training so that officers can fill any position in the department, transparency within the department and the community, interaction in community events, implementing body cameras and training to use less lethal options for the officers.

“My approach to serving Waverly will be the same way I tried to serve the people of Jacksonville, with honor and integrity,” commented Johnson. “Providing the service of law and order doesn’t change from department to department even though the uniform and patch on your shoulder changes.” Chief Johnson has always believed a well-trained officer is an effective and efficient officer and wants to make sure the members of the department have access to continuing education. “Just like the community-oriented policing plan we implemented in Jacksonville through JPD Police Chief Adam Mefford, I am wanting to see that in Waverly,” added Johnson.

Both Hansell and Johnson appreciate the years they had with JPD. “Personally, I knew it was time to move on,” concluded Johnson. “JPD has some great folks coming up and I felt it was time to step aside and give them a chance to advance and grow.” Hansell learned he wanted to be a leader through his time with JPD. “I want to be a leader that embraces change for the right reasons and that will be good for all involved,” concluded Hansell. “Show me a new way, why it is better, and we’ll work together to make it happen.”