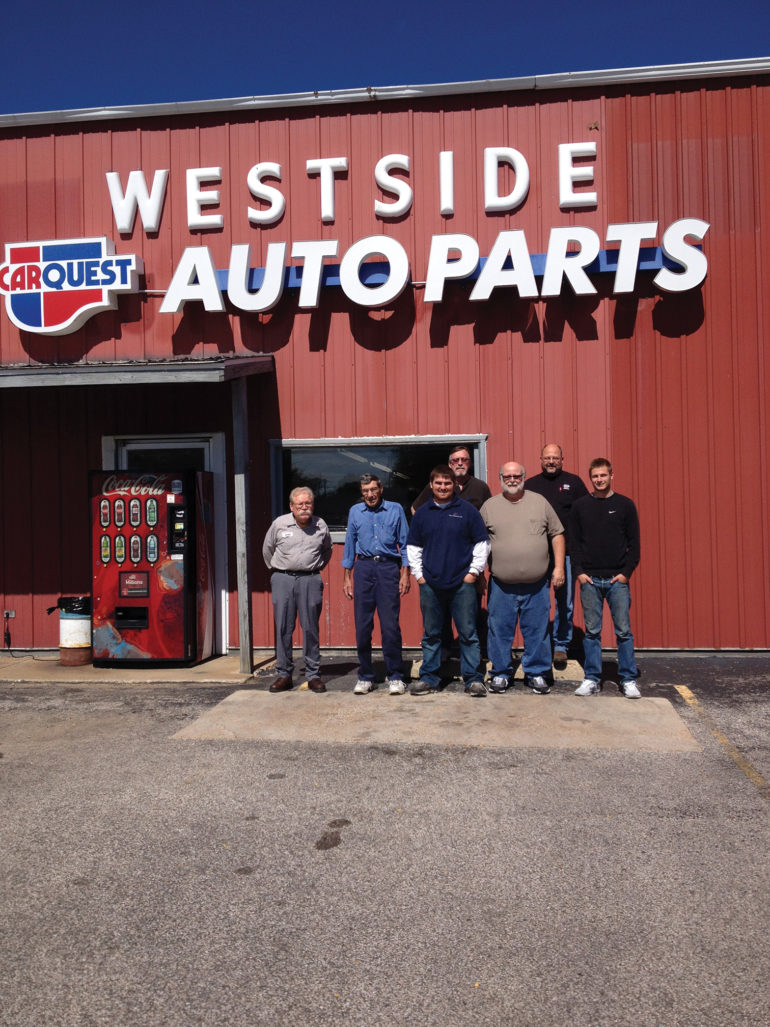 It would be impossible for me to tell the story of West Side Auto Parts without first explaining my relationship with the family that owns it. In fact as I type out this very sentence I sit at a desk in an apartment just above West Side Auto Parts or “West Side” as some refer to it for short.

My roommate and best friend, Jacob Mills, is the current owner of West Side, the only locally owned auto parts store in Morgan County and the surrounding area. Along with his cousin Joey Mutch and Uncle Ron Schaecher, the Mills family is closing in on 80 consecutive years in which at least one member of the family has worked in the auto parts business. And for them, valuing their customers and the service they provide is a mantra that they’ve lived by since day one.

The narrative begins with Bill Mills, Jacob’s grandfather, who after serving in the US Navy during World War II, decided to get into the auto parts business. His first job took him to an auto parts store in Pontiac, Illinois. After working close to 30 years in both Pontiac and for the independently owned United Wholesalers, Bill and his family, along with his son Chip (Jacob’s father) began laying out plans for West Side.

“I can remember them laying down the concrete,” said Joey Mutch, “I would’ve only been 5 or 6 at the time, but I can still remember it.”

West Side Auto Parts was established in 1976 and remains in the same location today, at 604 Libby Lane in Jacksonville. The store specializes in the distribution of Carquest auto parts and PPG auto paint. By this mid-1980’s, with Bill nearing retirement, the family business was turned over to Chip Mills, who had been working at the shop since childhood. And it was Chip who got West Side involved with Carquest, who at the time was independently owned. With Advance Auto Parts recent acquisition of General Parts International, Inc., a leading privately held distributor of aftermarket auto parts operating under the Carquest brand, West Side is now associated with the largest auto parts distributor in North America.

Although Carquest or GPII is no longer privately owned, West Side Auto still lives by the principles established by Bill and Chip Mills: supporting independent and locally owned businesses and maintaining good relationships with their customer base.

“Most of our business comes from delivering to local family owned businesses, like body shops and local farmers.” said Jacob Mills. “And we’ve dealt with the some of the same customers for 3 generations now. I’ve had people come in our shop and say ‘Yeah, I remember coming here with my Dad when I was a kid’, so its cool that they get to relive those memories.”

Thus, West Side depends on the notion of reciprocal relationships, and sustaining trust with their customers. When you walk into West Side Auto, you can expect to find a knowledgeable staff who cares about the service they provide.

“We’ve dealt with independently owned and family owned businesses for almost 40 years.” said Mutch. “So we believe in practicing what we preach, and being able to provide quality service. We’ve had people from out of town, who grew up in Jacksonville, come in just to see who’s still here.”

With the tragic passing of both Bill and Chip Mills in the Winter of 2014, the family business has been handed down to the next generation, with Jacob owning the shop in Jacksonville and Joey owning a second shop in Carlinville. “Obviously, this wasn’t always the plan, having us take over the business this soon.” said Jacob, “But we’ve both been involved with the shop since we were old enough to hang up parts. West Side has been here for 40 years already, and the plan is to be here for another 40.”

So while you may be more familiar with some of the nationwide auto parts stores like NAPA or Autozone, a locally owned shop like West Side Auto Parts provides an atmosphere that those bigger names simply never will. At West Side, you get the comfort of dealing with people who care about the service you receive. Four generations of knowledge and customer service has been inherited and maintained by a family who’s made their living out of serving their hometown. West Side Auto Parts is more than just a shop, it is a family tradition. (If you’d like to contact West Side Auto Parts, call (217)-243-7411 or head to the shop yourself at 604 Libby Lane in Jacksonville.)