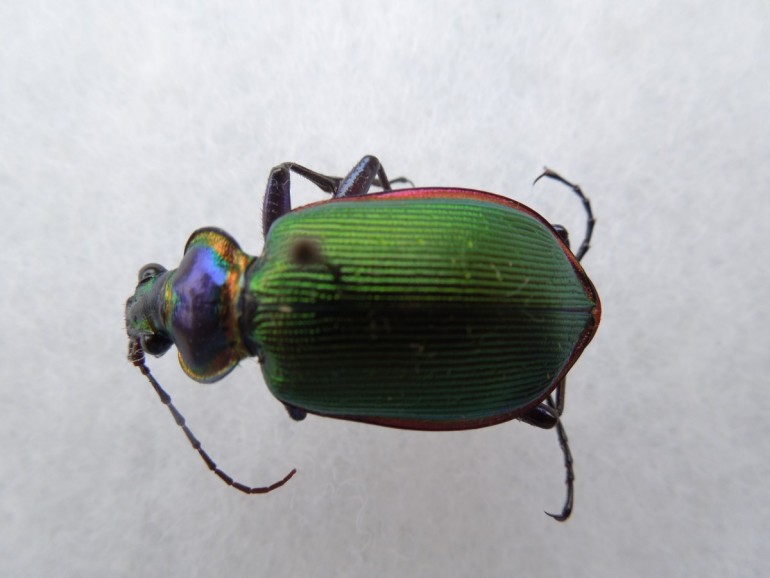 The fiery searcher is a common predator inhabiting a wide variety of environments including in ornamental landscapes and lawns, in addition to woods and fields. They can often be found under decomposing wood, rocks, leaves, etc. during the day. They are active from around May all the way through November. They seem to be most commonly encountered in May and early June after trees have fully leafed out and caterpillar populations are starting to rise. Adults generally feed at night on insects, primarily caterpillars, such as Eastern tent caterpillars, gypsy moth caterpillars, and fall webworms. Females will lay eggs in the soil in early June. The larvae are predatory as well and are active hunters. Like adults, they also feed on caterpillars and feed at night, remaining on or near the ground. The larvae will feed for three or four weeks and eventually burrow into soil to pupate. Adults will often overwinter and may live for as long as two to three years.

Adults can often be seen running up and down tree trunks and are strongly attracted to lights. They will emit an unpleasant odor to ward off predators and they have large mandibles that can deliver a painful pinch if handled. The name fiery searcher comes from one of two places, or perhaps a combination of the two. First it can reference the red margins on their metallic green elytra. Or it comes from their habit of moving rapidly through the forest as they search for prey.

So if you see one of these beetles, don’t be alarmed. They aren’t going to do any harm to your plants. In fact, they are doing the opposite by controlling caterpillars.