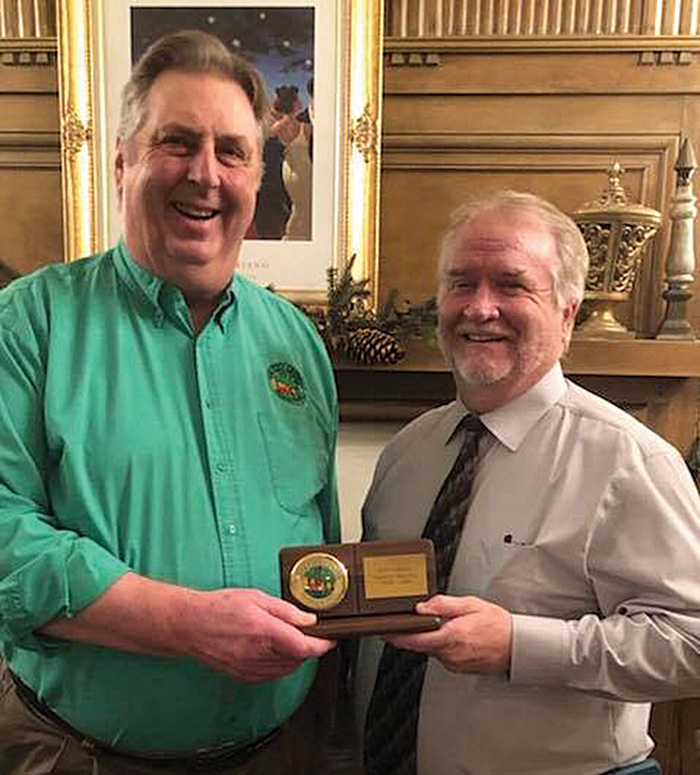 Our communities need many more people like Tom Frederick. He loves what he does, loves the community and wants the best for both! This man exudes warmth and that puts people at ease as soon as they meet him. Frederick retires as president/CEO of Elm City Center on August 1. He has been helping Elm City Center commemorate its 60th anniversary in Jacksonville with a series of celebrations, including a day outdoors with water and water balloon activities, a cookout and a Jacksonville Area Chamber of Commerce Business After Hours event.

Frederick, who grew up in a western suburb of Chicago, went to school at Eastern Illinois in Charleston. He says, “I was going to grad school in psychology when I got a job at a place called CCAR Industries and it changed my entire career.” CCAR is a not-for-profit organization in Charleston that provides community-based services and supports enhancing the quality of life of citizens with developmental disabilities and/or other functional limitations throughout their life span, much like Elm City.

“And here I am today, doing the same kind of stuff, said Frederick with a broad smile. “I had no plan to get into the social services world at all.”

“We deal with people with disabilities in our little niche in this community,” explained Frederick. “If you aren’t into that part of that world, you probably won’t pay attention to us. It’s like that with everything; unless people are involved with something very directly, it won’t mean a whole lot. But I think over the years we’ve done a great job of getting Elm City involved with community things. For us, it means giving back, not always asking for things. It means getting involved with Kiwanis and youth football like I have. I’ve got staff here that is involved with other organizations like Pilot Club, church groups or whatever they choose. It means simple things like big yellow 20-foot-by-20-foot tent that has our name on it that we lend out free to an organization. We even come set it up and take it down. We were just at the fairgrounds where they fed the crews behind the concert stage. It’s been at youth football programs and golf outings.” Elm City’s tent primarily focuses on not-for-profit organizations events. The organization also regularly takes part in chamber events, creates a team for the Braggin Rights BBQ or sponsors things around town. Much of this is something that people may or may not expect out of a social services agency.

Elm City Center just went through its accreditation in July. “It’s the 14th one of these things I have been through and we scored 100 percent!” said Frederick proudly. “I’ve never done that in a national review before. We did very, very well. We had many compliments on the quality of work that our staff had put out, for following through on our plans, helping people be independent in the community … the homes we have people living in that they thought were great … one positive thing after another. We were just saying thank you, thank you, thank you.”

Elm City focuses on keeping its people working and supporting themselves. Elm City has people come from a seven-county area and is able to transport them through a partnership with West Central Mass Transit to get their people to their jobs. Doors to offices at Elm City are never closed. Regulating groups constantly comment how people say, “Hi, Tom,” or, “Hi, Dave,” as the president and vice president walk among them. Those regulators explain that in other places there are no interactions like that. Frederick thinks it is essential to know the people and be involved with them — not to shut yourself away in an office. Similarly, he doesn’t believe in shutting the company away from the community. Elm City began holding a Thanksgiving meal for their people years ago when they found a need. They currently hold this meal for approximately 140 people.

On retirement, Frederick says he doesn’t have a real plan yet. His wife wants to be a grandma living near their daughter and grandchild, who are in Charleston, Illinois. Their son is up in Chicago. “We have no desire to leave Illinois at all,” says Frederick. “For me, it’s been a great place … one positive thing after another. I have gotten involved with great people through fundraiser groups for Kiwanis, through youth football for 13 years, through people I’ve met through Elm City [and] through our board members. I don’t see how it could be any better.”

Board member Dr. Peter Russotto says he was on the committee who hired Frederick. “He’s been phenomenal for Elm City and the community! He believes in keeping the organization’s employees and management involved in the community in many ways. He has also been instrumental in bringing David Pennell on board as vice president and has groomed him to take over. We interviewed candidates and found David will be a great leader and continue the policies of community involvement that Tom began.”

When asked for a most memorable moment, Frederick replied, “A whole lot!” He continued, “The biggest one for me was … it’s a dichotomy of where you are going to. With EMI, jobs would come in and we would bid on them along with competitors here in town and Quincy. I remember very distinctly being in a meeting in Springfield at McFarland with mental health, discussing grants and funding for the future and getting a phone call from EMI to negotiate a nickel over a price of a CD bid. So, I’m on one part talking about a negotiation of a half a million bucks, and on the other part doing the nickel negotiation. So, which is more important? Well, the nickel was going to keep a lot of people busy by having a job coming in here. The social service side and the business side overlap in many, many spots and you’ve got to find some way of working it out. I understand there is a difference, but in some realities, it is not that different. You still have to have a relationship … you still have to understand what the company wants … you still have to do what you can do to make things happen. It’s part of the game. Part of what we’ve got to do. And, we did it well.”

They have seen changes with the closing of EMI and later Jacksonville Development Center, and have adjusted to the changes. Frederick counters, “But what company hasn’t gone through that! We’ve had to stay flexible. We do a lot of paper recycling now. We are in 35 companies here in town and it’s nothing for a company to drop off 20 tons of paper to recycle. We have also recycled cardboard for years. At the same time, other companies have picked up. We have always worked with the ‘Mobile/Pactiv/Reynolds’ business for plastic bags. We have done store displays, for whatever version their name was, for a long time. They have always been a great customer and we have a great relationship with them. Our job for them is to make end-of-the-isle store displays. Most of the companies Elm City Center produces products for are local companies — large and small companies including Reynolds and Serious Lip Balm.

Wrapping up, Frederick didn’t want to forget to recognize the importance of and his appreciation for his board of directors, many of whom been have been on and off the board for a long time. Frederick said the board is made up of people who are professionals from around the area and includes parents, family members or people interested in what Elm City is doing. He conveyed that most of Elm City’s big decisions go to them. He said, “We talk about all the options and decide how to do things. And, they are financially very conservative and [ensure that we are] watching our bucks carefully. So, Elm City Center is in a good spot to handle what’s coming our way, and that is coming from our board.”

As for staff, Frederick says, “We have people who have been here for 30 years – a lot of them. Actually, our production guy has been here for 41 years. They must like something that is going on here. They could have left any time they wanted to.”

His final thoughts summed up how he feels about the company leaving it. “So, we have great people, a good board … the families we work with have been terrific. We’ve got to listen to them for what they want for their family member who is coming here. As for the State of Illinois, we have some good people coming from them; there are disagreements of course, but overall it works out really well. Will we ever become huge? I’ve always been a big proponent of regional stuff. I could see sometime in the future, places our size, in multiple counties, having some kind of relationship to work together. But, we aren’t there right now. It may come in some time, but I think Elm City itself is in a good place for the future – wherever the future is going to go. That’s the part I like the best of all this, that if I’m going to leave a place, it’s left in a pretty strong financial spot. It’s got no debt, everything is paid for, and we have money in the bank. A good spot for any company.”