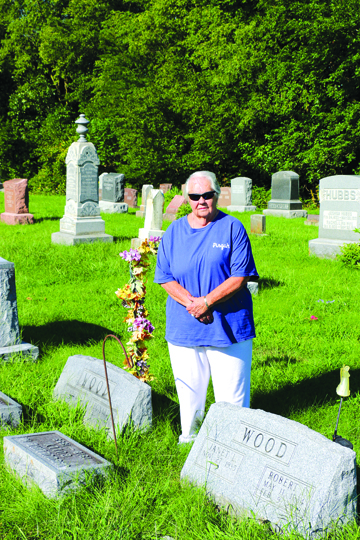 Yes, it is the second coming for those who missed the opportunity in 2018. Sandy Winner, Terry Cully and Mike Smith have organized another sale of Pisgah ware, but the trio is going a step further this time around. “We sold them in 2018 as short-sleeved shirts only … We sold 148 … and we are bringing the fundraiser back with different options … long-sleeved t-shirts, sweatshirts and hoodies,” notes Winner.

Winner says a former Pisgah resident came up with the design and then the group added a few things to it. Although the Union Baptist Church is long gone, the Union Baptist Church Cemetery remains. “My parents are both buried out there. I’m from Pisgah and you know, I have a soft spot in my heart when it comes to keeping things maintained, and so many of the old cemeteries – they just don’t maintain them.”

Three people are on the board for the cemetery — Terry Cully is one of them. Winner states that Cully was born and raised in Pisgah and that “Mike [Smith] has a lot family out there and he’s quite a historian. On Facebook, he started the Pisgah page, ‘Pisgah, Illinois History.’”

The trio is behind the sale, a fundraiser to benefit the Union Baptist Cemetery Restoration Project. “What we are doing with the money and hopefully more is to reset stones and level them and put a new base in them, or whatever is needed to bring them back,” informs Winner.

The cemetery is located on the north side of Union Baptist Road; it is about 0.5 miles east of its intersection with Pisgah Road. Winner announces that the group has repaired 34 stones so far with $6,250, which is money raised not only by the prior shirt fundraiser sales, but also includes donations that the group has received to go toward the rehabilitation of the gravestones desperately needing attention.

The cemetery has approximately 450 burials according to records. The church was established in 1830 and razed part in 1971-1972. Within the cemetery are the ancestors of many area people. “It was a beautiful church,” recalls Winner.

“I would just like to tell people that any dollar amount you can contribute would help get the cemetery up in A-1 shape, and it’s greatly appreciated! I think I collected $1,500 in donations. Another gentleman just donated another $1,000 toward our project – I mean, there are people who don’t even have family out there that donate … it’s quite something.”

Winner also wants to make sure people know that everything is toward keeping something presentable that matters … giving eternal honor to family members of local people. She adds, “Jacksonville Monument has been gracious enough to reset new stones … We’re hoping that this will conclude the fundraiser and we’ll have the repaired with this year’s fundraiser.”

The group works with Rick Rolson at OutBreak Designs Screen Printing and the tops features the outline of Illinois enclosing graphics of corn, grain bins and a barn all set over a red heart followed by Pisgah. The color options are blue, black or gray. For convenience, an order form is available on Page 12 in this edition.

Please note that the group does ask for a form to be submitted for each long-sleeved shirt, sweatshirt or hoodie. Additional forms can be printed off of their Facebook page. Due to requests, the group will also soon have youth t-shirt order forms available, so be on the lookout.