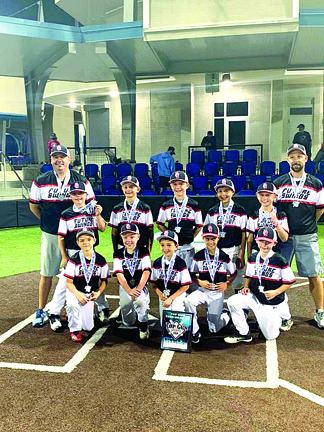 A local traveling baseball team based out of Jacksonville recently returned from a tournament in Mt. Pleasant, South Carolina, with an impressive finish in the Top Gun fall tournament.

The team defeated three teams over the three-day tournament to make it to the championship game. The tournament had some tough competition from South Carolina, North Carolina, Virginia and other Illinois teams. The championship game put the Future Swings team against an all-star team made up of top players from five different teams throughout the state of Virginia called Virginia Stars Wunder. After a hard-fought game, the Future Swings team ended up landing in second place overall.

A typical season for this Future Swings team runs from January through November and consists of more than 60 games with 70% of these games taking place in Jacksonville. During the course of their season, they compete against 40 to 50 different teams from roughly five states. The COVID-19 pandemic delayed the start of their Illinois season, but they were able to play in tournaments in Missouri and Iowa. Local tournament play began in late June.

Adam and Kristin Jamison of Jacksonville own and operate Jamison’s Future Swings training facility located at 2253 West Morton Avenue, and they are a part of the management team for the Future Champions Sports Complex located at 5 Kelly Street, west of Passavant Area Hospital. A total of 19 Future Swings travel teams are scheduled to compete during the 2021 season, which includes 14 baseball teams ranging in age from eight and younger to 18 years, and five softball teams with girls eight and younger to 16. Baseball and softball athletes come from all over Central Illinois to train at Future Swings, practice with their teams and compete a majority of their games at Future Champions. The baseball/softball complex has six turfed fields and hosts nearly 1,000 travel teams during the season. Their facilities are also utilized for high school and collegiate teams.

The coaches for the Future Swings South Carolina traveling team were Troy Kinstle from Concord and Josh Martin of Bloomington.