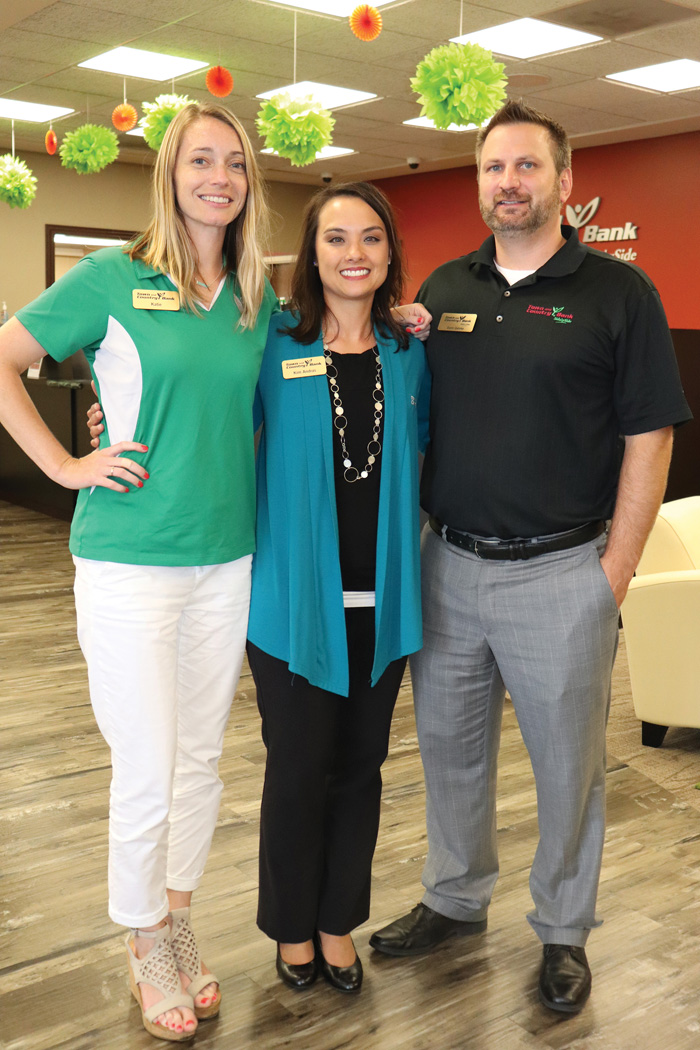 “So, they need someone who can process business loans and can deal with the customers and the business clients. I fit the bill there,” says Gehrke. “Also, the bank, as a whole, wants to do more loans that are SBA backed. So, having somebody with that expertise kind of rounds out the reasons why this position and I fit so well.”

“I grew up in Springfield and I went to Illinois College,” Gehrke explains of his local connection. When asked what his most memorable class was, he said, “Well, I enjoy acting. My degree at Illinois College was a business communications major with a theater minor. So, probably some of my most memorable were with Ann McEntee who was the theater director. I did eight or nine shows during college at Sibert Theatre and actually, over the last five years I’ve done shows at the old Jacksonville Theatre Guild, before it closed, and at the Playhouse downtown.”

Gehrke also remembered a business class where he had to do a presentation at the end of the class and the professor said he said he could tell Gehrke did some acting because he was able to wing a few things during the presentation and not many could do that. “So, I guess the business and theater really did work well together,” said Gehrke, with a smile.

After he graduated in 1998, Gehrke worked for a few years in Indianapolis, then went to work for four years at Valparaiso University. “I was in charge of residence halls. I had gotten my master’s degree in higher education and student affairs, so my first career was on a college campus working with college students. It was a great job to learn and grow my career. Then I came back here and was director of residence life at MacMurray College for three years. I ran their residence halls.”

Then, he decided to do something completely different.

“Then I got into finance and worked for 11 years processing a government commercial loans for small business. It’s the small business administration SBA program. The title of the loan I processed was the SBA504 loan. It was my job to drive around the state and meet with all the commercial lenders at all the banks so they knew who I was and who to use to process the government loan program. It was mainly a fixed-assets program, for the purchase of large real estate or large equipment. I wasn’t a government employee; we were a non-profit company that processes SBA government loans. So as an authorized SBA lender, we acted as the bank for the government. This loan program didn’t allow the banks to deal directly with the SBA, so they had to go through a certified company. I got to know all of Town & Country commercial lenders through that process and processed a number of loans with them.”

SBA loans provide a guarantee to banks and lenders for the money they lend to small businesses owners. This guarantee protects the lender’s interests by promising to pay a portion of the loan back if the business owner defaults on the loan.

“I did many loans with a number of loan officers in at Town & Country in Springfield,” explained Gehrke. “Plus, I met Paul White here from stopping in and talking about the SBA. I also lived in Woodson during that time and have lived there the last 15 years.”

He was even the mayor of Woodson for seven years. “I guess some people would be surprised to know that about me. It was interesting and fun,” says Gehrke.

Since starting here, he has joined Kiwanis. “I help out with the chamber where I can and I’m also trying to help out with Jacksonville Regional Economic Development Corporation. Those three things have been my focus. Personally, I do a lot of volunteering at Salem and I’m the athletic director there. I guess I try to get involved in a little bit of everything.

“What I enjoy most of what I do at the bank,” says Gehrke, “is the ability to help a new or an existing business get started or grow and reach their goals. Since I’ve been here I’ve actually been able to help a few businesses get going because of my small business administration background. The SBA loans allow a bank the comfort level to lend to a newer business.”

“It’s knowing you have helped somebody find their sweet spot. A lot of people get into their job and they hate it, but they just do it because they have to have a job. So actually, seeing people do what the love and helping them out with what they are passionate about, that’s why I do the job I do.”

“Town & Country wants to lend money,” explains Gehrke passionately, “so we are in the situation where the bank, and I think other banks, have the funds and the ability to lend. So that is a positive thing. Hopefully, the economy is getting to where the demand for quality lending opportunities is available. Smaller communities are having a harder time getting that jumpstart again. I think Jacksonville has a lot of positive things happening. It just feels like we’re are just ready for that next business to come in, to just kind of push us through.”

“The amount of stuff happening in the downtown square I think is awesome. We’ve gotten a few new businesses and it would be great to fill the few spaces left.”

The other positive thing at Town & Country Bank in Jacksonville according to Gehrke is the staff. “I lucked out … coming into a place that has an extremely good staff. The employees here are all very customer driven and they all have big hearts when it comes to doing what’s right and helping people. And a lot of times you don’t get that in the banking world. And it is nice to be a part of an environment that cares and wants to help the bank clients. I’m not just saying that to make Town & Country sound good; there are good people here that have been here a long time.”

The entire bank has been renovated on the inside and recently has gotten an outside facelift with a new blacktop and landscaping. To celebrate all of the new renovations with the community, Town & Country Bank held an open house, which was also a Jacksonville Area Chamber of Commerce Business After Hours, on Thursday, August 9 from 4:30-6:30 p.m.

With their expertise and some different ways of lending, Gehrke is positive Town & Country Bank has the ability to help small business, the people that will go above and beyond to make it happen and is confident that those factors will set them apart from other banks.