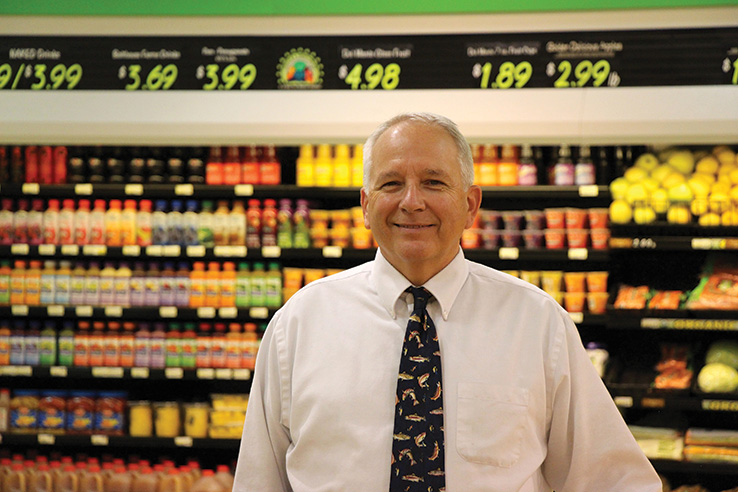 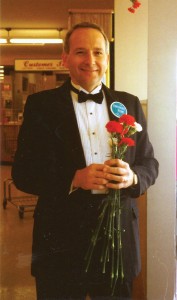 For a Mother’s Day promotion in the early 1990’s, Glossop donned a tuxedo and handed out flowers to mothers as they entered IGA, left photo. Back during his work at IGA, Glossop hands out a check to the winner for a store contest, top photo. 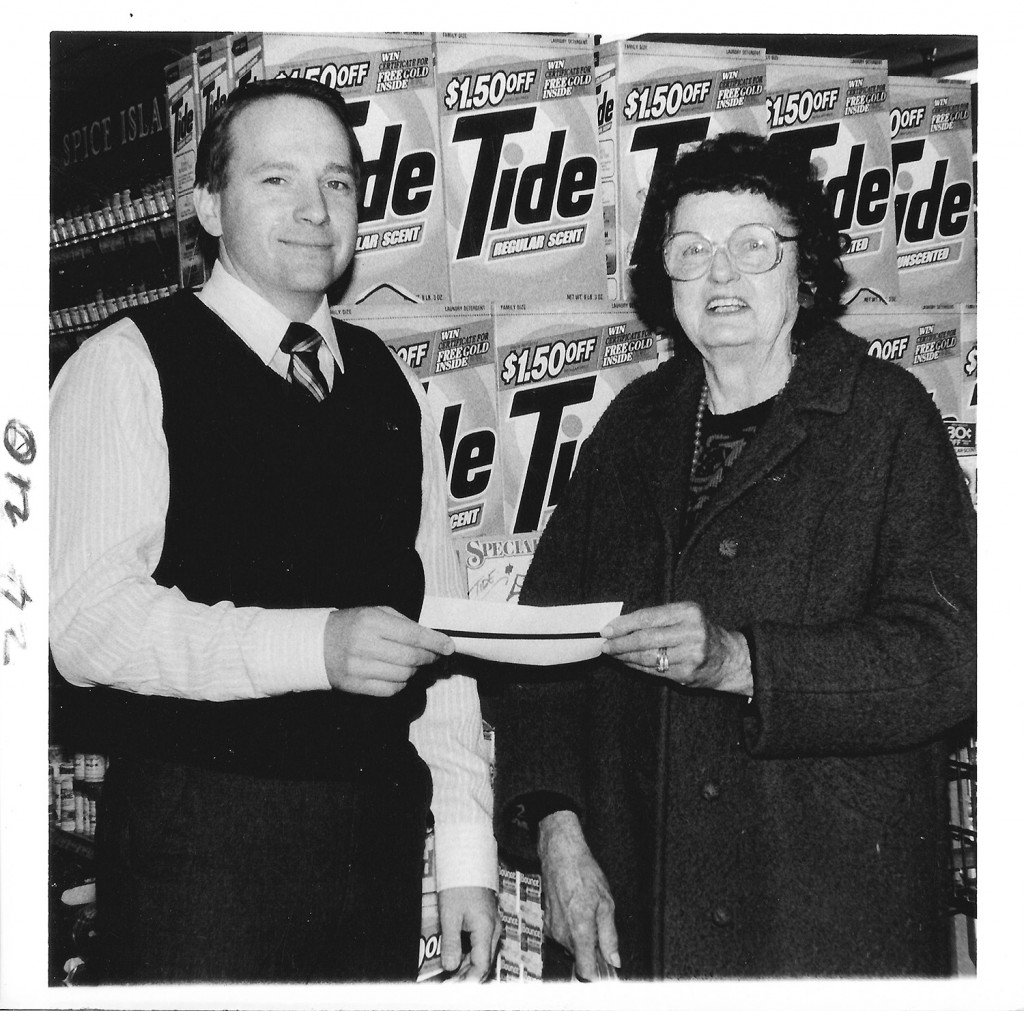 Tom Glossop’s introduction to the supermarket industry started in 1966 when a friend needed some help in school and Glossop lent a hand…with one condition. That friend had to find him a job as payment for Glossop’s tutorage. His friend found him work, thus beginning Glossop’s career (that has now spanned almost five decades) as a bagboy, making $1.29/hour at Jacksonville Foods on N. Main Street. On August 26, 1976, Glossop was given the opportunity to work for Carole Jean IGA and the Matthew family that owned the store (Carole was Howard Matthew’s wife and Jean was the daughter – just in case you ever wondered how it was so named). Glossop started as the manager of the frozen foods section, but was soon promoted to Store Manager in the spring of 1978. Tom Harmon purchased the store in September of 1987 and Glossop continued to work for Harmon at the now Harmon Foods IGA. In 1993, the County Market was built on Morton by Harmon and Glossop moved over to the new store in March of 1999. Glossop has been the Store Manager ever since and formally retires from his nearly five decades of work in the industry on November 1, 2014.

I walked in to meet with Glossop at County Market and there he was – bagging groceries for a customer like he did when he first began. It is a welcoming act to see that, even now, if the help was needed at the registers, he jumps right in. Still, many things have changed for Glossop through his career.  “Back when I first started at Jacksonville Foods, it was an 8,000 square foot store, and it contained everything that anybody could possibly want in the grocery industry. There wasn’t much else available – and today we have nearly 53,000 square feet…and now we have 8,000 square foot just for our bakery and deli area, practically. The computer age has really changed how we operate. There has been a big boom in the frozen food department – you know, stuff that’s ready to eat and all you have to do is microwave it or put it in your oven,” said Glossop. There’s much more variety. “Today you have ‘low salt,’ ‘no salt added,’ ‘no sugar added,’ and etc., etc., etc. You’ve got the gluten-free section now and I’d never heard of gluten-free back in the ‘60s,” adds Glossop. I told Glossop how I remembered the full carryout service at IGA growing up and he mentioned how a full service store really isn’t possible anymore, as interim costs, costs of labor, insurance cost and cost of delivery itself prohibits it. “[Jacksonville Foods] was a neighborhood-type grocery store,” Glossop recalls. “I remember walking down the sidewalk carrying people’s groceries to their home and putting them in their kitchen for them. I’ve always believed that service is always number one. I’ve always deemed myself as a public servant,” noted Glossop, adding that each of the stores owners instilled in him that belief.

As far as food innovation, Glossop remembers the first t.v. dinners and pot pies that came out – “They tasted just like the cardboard they came in. It’s been a great progression forward in making these meals have nutritional value and taste good at the same time.” With all the various changes over the years, be assured that Glossop has some fun memories. For example, his first month managing Carole Jean IGA was during a huge Eastertime ice storm and the store’s power was coming and going, but he remembers “the satisfaction of being able to help the customers out and being able to provide food for people who needed it at that time – and the people who were very, very thankful that we had opened up to serve the public.” (Mind you, this was all before scanners, as well. Bookkeeping was done on ledgers and amounts were typed in.) “I remember at N. Main when we got a fax machine and I said, ‘Holy moley! We’re downtown!’” Glossop never had a personal computer for use until County Market. When he arrived, they were only scanning and now, says Glossop, a standard PC will run the whole front end system.

Over all the years, Glossop has been taught how to maintain a business as an independent. Consequently, he has based his work on the direction that there are five things of importance: service (#1), cleanliness, quality, variety and price. These values have created the grand grocer whom he is. He had no hesitation whatsoever when I asked him what he’ll miss most; he answered “good customers.” “I’ll miss visiting. I’ve gotten to know a lot of people over the years. I think of all the characters over the years.” Glossop guestimates that he’s been in the store 6 days a week since 1987.

For 40 years, Glossop hasn’t truly been able to enjoy the holidays as it is the busiest time of the year for the store, so he is “looking forward to enjoying the holidays.” (There was a big smile with that comment.)  Events over the years during his grocery career have supported the community, such as the over 5000 people served in one evening years ago at Harmon Foods IGA for a free steak sandwich meal to the City of Jacksonville, complete with a country western band and square dancers for entertainment (not to mention the Unplanned scheduling of Cruise Nite that night which packed the parking lots). “It was a lot of fun.” He will absolutely stay involved with his community activities, including Kiwanis and involvement with First Baptist Church. Plus, Glossop “plans on lots of fishing.” He’s been a part of a Thursday night bass club for the last 25 years (I made note of his fish tie that he was currently wearing – a gift from his stepdaughter, Allison, while she was presenting a symposium on equine reproductive physiology in Norway. Glossop said he saw the same tie over in Springfield, but agreed that her story is much better).  Congratulations on your retirement and thank you for your years of service, Mr. Tom Glossop.