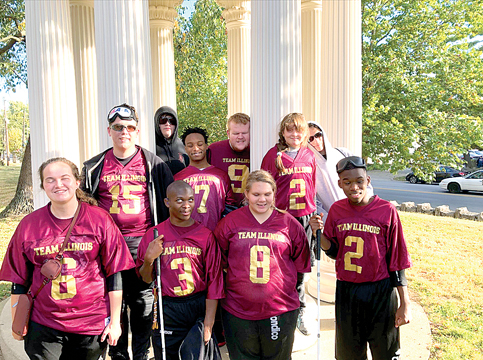 A unique sport is gaining popularity across the country and around the world. It is also popular locally at Illinois School for the Visually Impaired (ISVI) in Jacksonville, where the goalball teams are improving year after year.

The sport of goalball began in 1946, created by Austrian Hanz Lorrenzen and German Sett Reindle. They created the game to help keep blinded WWII veterans physically active. During the 1972 games in Germany, goalball made it to the Paralympics as a demonstration sport. The sport has become the premier team sport for blind athletes and is played competitively in 112 countries. ISVI has been offering this sport for 14 years.

ISVI Athletic Director Ken Mansell talks about his coaches for goalball: “Our head coach is Darla Chambers, and the assistant coach is Mike Foster. They have both been outstanding in coaching our teams.” Chambers was a student and now a coach at ISVI, coaching for a total of seven years. Foster has been a coach for two years.

The goalball teams are made up of three players and the game is played on a court 9 meters wide and 18 meters long. The object of the game is to roll a basketball-sized ball that has bells inside over the opponent’s goal line. The opponents listen for the oncoming ball and attempt to block it with their bodies. Once they can stop the ball and take control of it, they become the offensive team. Each player is required to wear blacked-out goggles or eye shades to put everyone on the same playing field. The game consists of two 12-minute halves, and it takes about an hour to play a full game. “Three players are on the court at one time,” clarifies Chambers. “At the conference meet, we are limited to six players on the bench; but throughout the season we can have as many players as we wish.”

A season will last about five weeks — from the first of October to the first of November. Depending on the meet and/or tournaments in which ISVI plays, the number of other teams can vary. Through the North Central Association of Schools for the Blind (NCASB), 10 teams generally participate at the conference meet. The team travels to Addison Trail to play against public school blind athletes once a year. “This fall, we participated in tournaments in Kentucky and Tennessee,” Chambers adds. The boys team finished the season at 10-2 and the girls finished 3-6.