The Morgan County 911 Board has implemented and watched the growth of the county’s 911 system throughout the years by volunteering their time and having a passion to help those in need. Starting with the ad-hoc committee in February 1990, to the passing of the 911 referendum in November 1990, to going online with enhanced 911 and putting the county’s 911 board in place on June 14, 1995, the loyal volunteers have kept an eye out for the citizens of Morgan County by keeping in place the most efficient and modern 911 services. The Morgan County Emergency Radio Network (MCERN) was developed by the 911 board so fire departments and ambulances can be dispatched on the same radio frequency. One of the most recent developments to the Morgan County 911 System is allowing people to send a text message to emergency personnel.

In 2015, Richard Evans, the chairman for the Morgan County 911 Board since 1995, retired. Rex Ginder became the chairman for the Morgan County 911 Board in 2015 following Evans’ retirement. The dedication of the 911 board to keep up with the changing of times so the best is offered to the citizens of Morgan County will continue under Ginder. He has been involved with the 911 board since he was the captain of the Jacksonville Police Department, when one of his responsibilities was the 911 Communication Center. He became a member of the 911 board after being appointed as the secretary/treasurer by Evans. Later on, Ginder was appointed to be the 911 board’s finance chairman. In the summer of 2015, the nomination committee recommended Ginder to be the next chairman to the 911 board.

The first major implementation made under Ginder’s watch to the county’s 911 system was the allowance of the public to be able to text emergency personnel. “This allows one more form of communication to request assistance,” he said.

Henry Rosenberger, a long-standing member of the 911 board, and Evans marvel at the change in technology and the impact it has had on 911 services throughout the years. Evans said the change in technology from day one to now is unbelievable. The public has went from calling mainly on land lines to reach 911 to using their cell phones by either calling or texting. Advancement in computers has enabled 911 emergency personnel to answer calls more quickly by having pin point directions. It has also been one of the challenges to the board. “We get the system running good then something new comes along,” Rosenberger said.

Both Rosenberger and Evans served on the ad-hoc committee. Those on the committee had a goal of getting better emergency services for the county and were personally involved or interested in emergency services. Before 911 police, fire and ambulance services were all separate from each other, and different seven digit phone numbers had to be dialed for the use of these services. Evans said their main selling point was letting the public know only three digits had to be dialed to reach all emergency personnel. The committee set-out to educate the public about the benefits of 911 through fliers, the radio and newspapers. Morgan County helped pay for the fliers since the committee had no money starting-out because it was independent of any agencies. “We’ve had the support of the citizens of Morgan County,” Rosenberger said. “We try to maintain a state of the art institution. It’s an expensive system, but it helps save lives.” 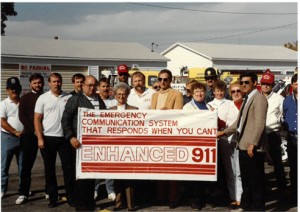 The 911 board paid for the implementation of MCERN, and the new radios and pagers given to all the fire departments and ambulances in the county. Money has been given to the county as well from the board to improve the emergency radio systems. Any equipment needed for 911 calls made to the county and city is paid for by the 911 board, along with the board making monthly telecommunications payments since 2006 for the county and city. “I believe the Morgan County 911 Board has cooperated extremely well with all the emergency people to make this more efficient,” Evans said. “Our number one goal is to save lives and to get help there as quickly as possible.”

Currently the 911 board is working on combining and moving the city, county and Passavant Area Hospital’s 911 dispatch centers to one location. Ginder is hopeful this project will be completed by the end of the year. Evans said having the dispatchers in one building will decrease the amount of time it takes for emergency personnel to respond to a call, and avoid having duplicate emergency personnel sent to the same call.

The 911 board started out meeting twice a month, and as the board became more efficient with issues, the board began meeting once a month. There are 12 positions on the 911 board, and many of the board members have been there for numerous years. Only three individuals have been the 911 board chairman, the first being Russell Morris then Evans and Ginder. Bob Fitzsimmons was the first 911 coordinator and now Phil McCarty is the 911 coordinator who works for the board and runs the daily operations.