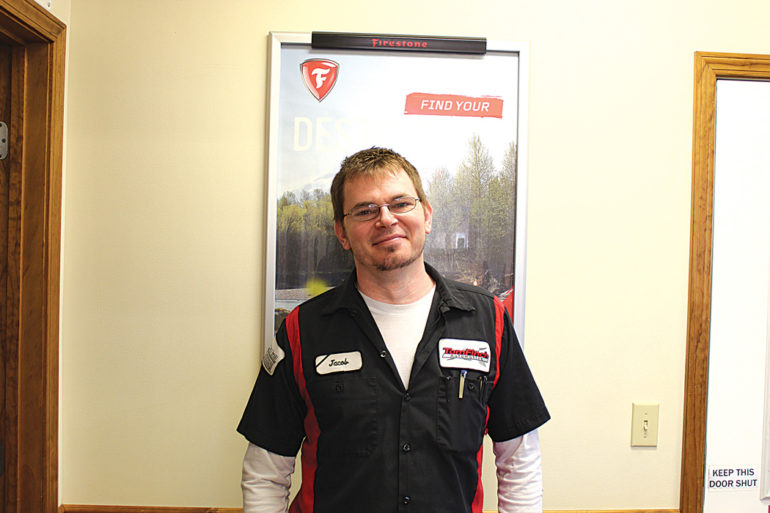 Jacob Edward Traeger spent time in northern Illinois, which played a role in him becoming a fan of Cubs baseball. He has even spent some time living out of state, but now he has his home here in Jacksonville. If you ever had your vehicle worked on at Tom Finch Automotive, you have probably met Traeger since he is the manager of the shop at 1025 West Walnut St.

That position came about when owner, Tom Finch, decided to open another location and since he knew Traeger from working on his vehicles in the past, Finch decided to ask him to manage the old shop. Whether he is at the shop or not, Traeger’s agenda is a full one: he plays the role of husband to his wife Amy Traeger; dad to his two kids, Caleb and Kendall Traeger; and he also fills the role of coach in two different sports. Traeger coaches his kids’ soccer team and also helps coach Jacksonville High School’s bass fishing team, which is great for Traeger since any other spare time he has is spent crafting fishing tackle and competing in fishing tournaments. With all of these commitments outside of work, it comes as no surprise that when asked about his choice of super power, Traeger chose to have the ability to freeze time. Traeger says that some days it feels as if he gets over busy and cannot get in front of things, so the ability to stop time and catch his breath would be warmly welcomed. If a monetary side to things no longer existed, Traeger says that he would spend his days tournament fishing — not for the prize money but for the love of the competition and being able to be out in nature. Traeger was also asked about what books he would bring with him to keep him company on an island and he picked the Bible, “The Five People You Meet in Heaven” and “Moby Dick.” Traeger takes life day by day, enjoying the little things it has to offer. If you’re having work done on your vehicle or just want to tell Traeger hi, head on over to Tom Finch Automotive.