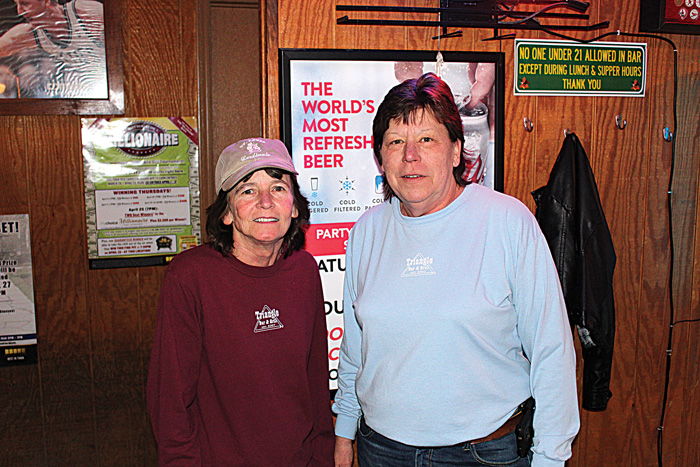 I’m sure most of you know the Triangle Bar & Grill in Woodson, whether you have been there for a drink, bands or for their catfish, for example. But, how well do you know the owners, Paula Lane and Cheryl Braden? Lane and Braden have always lived around the area, and for 20 years they both worked other jobs while holding on to their dream of owning their own bar one day. While they worked to get there, each of their careers fell on a different part of the spectrum. Lane worked for two decades as a schoolteacher, and although she found it to be fulfilling, she always had a desire to buy her own bar. Braden had worked at warehouse for 20 years while keeping an eye on her future goals — which would inevitably line up with Lane’s. They both worked extremely hard for their dream and love what they do every day. Of course, everybody deserves a break, so if they’re not at work, they are usually hanging out with their pups at home. When we asked this dynamic duo what they would do if money didn’t batter, they both had the same response: to disappear to a beach somewhere and bum out their days by the water. Their response helped make for the perfect transition toward another staple question we ask, which is what books would they take with them to an island to keep them company. Braden was to the point and requested anything by Stephen King, while Lane said she would enjoy anything to do with sports, more specifically books about college basketball or Cardinals baseball. Our last hypothetical question was what each would choose for a super power. It was only Braden that had an answer for this one; she stated that her higher power is Jesus and she doesn’t need a super power as long as she has Him. For both ladies, they had a journey to get where they are now and they wouldn’t change a thing; if you ever want to tell them hi, stop on by the Triangle Bar.