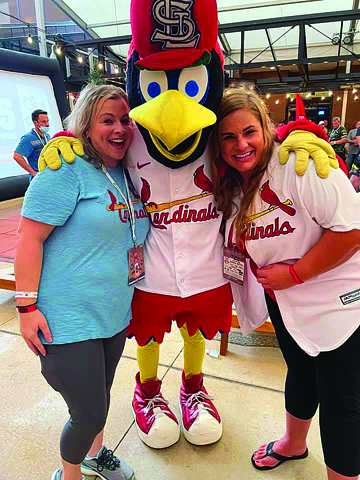 We have all been affected by cancer in one way or another. One local resident recently lost her sister to cancer, and on August 23, joined with others to raise awareness and funds for cancer care.

Holly Duvendack Saxer teamed up with Allison Cockrell Kennedy to take part in the 7th annual St. Louis Cornhole Challenge. The event is sponsored by the Jason Motte Foundation and was held at the Anheuser-Busch Biergarten. Jason Motte is an American former professional baseball relief pitcher. His career in major league baseball (MLB) includes playing for St. Louis Cardinals, Chicago Cubs, Colorado Rockies and Atlanta Braves. He was drafted as catcher in 2003 by the Cardinals and switched to pitching in 2006.

Most people touched by cancer want to do something to help. Motte and his wife, Caitlin, were watching her grandfather battle Stage 4 lung cancer when they wondered what they could do to help.

While sitting together during one of his treatments, they noticed a sign that mentioned a need for blankets and thought they could do more. That started the Jason Motte Foundation and their campaign saying, “Let’s Strike out Cancer.” Their mission is to provide comfort and care where there is a need for those affected, either directly or indirectly, by cancers of all kinds.

The team of Saxer and Kennedy was among 156 teams that participated. All teams together raised $175,000 with this year’s event. In addition to having fun playing in the bags tournament – something that was a first for Saxer – the event had a silent auction.

Some of the items included signed jerseys from Nolan Arenado and Jack Flaherty, an Adam Wainwright autographed photo, a Whitey Herzog autographed caricature, a poster signed by most of the 1982 World Series Champions St. Louis Cardinals and a hat signed by Harrison Baber.

A highlight for those in attendance was the chance to meet some of the sports figures present. In addition to Motte, attendees were able to meet Matt Adams and John Jay. Also, Bengie Molina, brother to catcher Yadier Molina, was there. He is a former MLB player and currently part of Cardinals Spanish radio broadcasts.

Saxer wanted to take part to honor her older sister, Laura Duvendack, who passed away on July 25 from lung cancer at the age of 42. “Her death was a shock to us all,” states Saxer. “She had never been a smoker and was only diagnosed six days prior to her death.” Laura was an amazing big sister to Saxer and fellow sister, Sarah. The three are the children of Randy and Naomi (Stuart) Duvendack.

Saxer says Laura was the mother of two adopted children, Reylin (8) and Avery (5). Duvendack devoted her life to making a difference in the lives of children. “Her death has left an enormous hole for all of us,” concludes Saxer. “A woman without her sister is like a bird without wings. I miss my wings every day.”