Special To The Source Newspaper

Western Illinois Youth Camp and retreat Center originally began as Western Illinois 4-H camp in July 16, 1948 through the efforts of several individuals in the University of Illinois Extension Service from several countries in this region of Illinois. It was “to provide grounds, housing, facilities and meetings, camps, shows and activities of agriculture, home economics, civic, and other groups and organizations, to promote and advance the cultural, horticultural, conservation, and civic interests of Western Illinois”. The original camp region was compromised of 21 countries: Morgan, Sangamon, Knox, Peoria, Warren, Henderson, Mercer, Greene, Scott, Cass, Macoupin, Mason, Pike, Jersey, Brown, Schuyler, Calhoun, Fulton, Hancock, McDonough, and Menard. It was run by the U of IL Extension up until the mid-1990’s when the Extension went through its overall reorganization of offices and camps throughout the state. They would hire individuals to be program staff as well as a director (someone in Extension or not) for the camping season, a team of three cooks, and a full-time maintenance person who lived in what is presently the Director’s house. The Director oversaw all the program staff which included Arts/ Crafts, Recreation, Waterfront, and Nature (all college age or older) along w/ the CST’s (camp staff trainees, 15-17 yr olds—persons who hopefully would return to become program staff when old enough). The camp was reorganized in September 2001 to become Western Illinois Youth Camp & Retreat Center as the U of IL Extension Service phased out of its involvement. In its heyday, this camp accommodated 150-200 campers per week!! 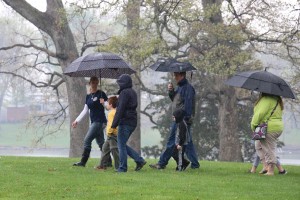 Photo/Kyla Hurt
Campers and families take a tour with a counselor around the Western Illinois Youth Camp grounds during a recent Open House event at the camp. Even on a rainy day, the kids were excited to be at camp.

Campers originally ‘camped out’ in tents until one by cabins as well as other buildings were built with the help of volunteers on “works days”. The various buildings around cam came into being as follows: Canteen 1952—now known as the Registration Cabin; South Campus cabins—3 built in 1952 & rest in 1982; South Campus Bathhouse—1960; North Campus cabins—1960; North Campus Bathhouse—1960; Cooks Cabin/ staff lounge—1962 now known as the Krell Cabin; Nature Cabin 1952—now known as the maintenance Shed; Dining Hall 1962; Recreation Hall 1962; Wentz Hall aka Craft Hall 1975; Director’s house 1975; Waterplant 1962—torn down/ replaced with county water in 2007; Beach Shed 1980—torn down/replaced in 2012.

Campers would be assigned to “Wagon Wheel “for the week using the names such as Annie Oakley, Buffalo Bill, etc. for the wagon wheels, and, that would be how the groups would rotate to the various activities around camp. They would meet in their “wagon wheel” areas which would be found on the way to Inspiration Point on each side near the lake as well as along the lake in front of the Dining Hall, each day, to go over the day’s activities. The wheels have been pulled out to be replaced for camp historical value in four locations around camp in the future.

Numerous trails may be found in the North Campus which has mostly deciduous trees and there are even primitive camp sites which may be used for camping. The Rifle Range ( it used to be behind the North Campus Bathhouse) was used until the early 1990’s. There also used to be a Rope Bridge in that area that led to the north trails as a shortcut to get there and just south of the Bathhouse in North Campus, there used to be a maintenance shed that was torn down 40+ years ago. The trails in South Campus run through the Pine Forest and along the lake as well as through the deciduous trees in that part of camp and around the cove. South Council Range is located along the South Campus trails—its benches are fire pit were replaced/renovated in 2012 thanks to a local Boy Scout Eagle Project as well as benches to sit on in the Pine Forest and along the trail behind the cabins in South Campus. The Low Ropes Challenge Course located in the Pine Forest has been integral part of camp since its seven ‘pods’ were installed in 2003. It promotes ‘team building’ for all youth during various camps, and adults who go through it as well, when it is rented by outside organizations.

The camp bell near the back entrance of the Dining Hall has played an important role at camp through the years. It would be rung to announce when to move to the next activity as well as to let “trotters” know when to come to the Dining Hall to set up the tables for meals and to announce mealtimes. It has also been used to warn everyone around camp of weather issues, i.e., severe thunderstorms or tornadoes so that campers may all be moved to Wentz Hall for safety.

The Red Bridge is another [art of camp that is much loved and utilized as a short cut across the cove from South Campus/trails/Pine Forest to the rest of cam. It is also a great place to fish from early in the morning or at dusk.

The Archery Range has been a favorite area of camp through the years and recently renovated in 2010 by another Boy Scout Eagle Project. No more soggy hay bales to deal with at the end of each camp season which were used as backdrop for the arrows!

Inspiration point is a lovely spot at camp for which it has benches which face toward the main part of the lake with a fire pit as well. Various ceremonies have been held there through the years, such as the camp Indian Ceremony, Morning Watch (a Sunday morning service in during Family Camp), Evensong, and even several weddings, including those of two past camp directors.

The Recreation field is between Wentz Hall and the Recreation Hall. Games of all sorts have been played there along w/ softball, kickball, and volleyball. Up until recent years, there was even a backstop to prevent foul balls from heading toward the Dining Hall or the other buildings nearby. The camp Totem Pole has been resurrected from storage and placed back out on the Rec field near the flag pole for campers to enjoy.

The Waterfront is probably the most favorite area in summer. Campers may swim, canoe or rowboat, swamp canoes in the cove, or do numerous other water-related activities such as going after greased watermelon (eaten later!) during fierce team competition or log-rolling. Campers must take a swim test for those 16 and under (per state law) if they want to swim between the ropes in the deep area and use the floating dock. Others who are considered non-swimmers still may have fun in shallow area between the U-shaped stationary dock playing water games, diving for clam shells, using water toys, and so on.

For many years, Stewardship Week was held at camp, usually the end of September of first of October. The Department of Natural Resources and U of IL Extension Service provided exhibits and speakers, holding mini-clinics, for schools in the surrounding region from Greene County to Schulyer County, on conservation, ecology, fishing, flora and fauna of Illinois, geology, and water. Grades 3-6 would enjoy time at camp learning how to be more aware of their environment and how to preserve it as well as enjoy it.

Diabetic Camp out of Peoria, IL sponsored by the hospitals and American Diabetic Association in that area was a camp which used WIYCRC for many years up through the mid-1990’s. they would provide all their own program staff except for Waterfront, including many doctors, nurses, dietitians, and would have clinics for the campers ranging from 6 through high school age, on how to cope with diabetes, teaching them calorie counts, snacks, giving themselves shots, wound care, etc along with down time form camper to have fun and explore the grounds. Another local organization who used camp for many years was Winchester HS Band. They would hold a ‘band camp’ for a week in August each summer working on half-time marching band routines with breaks to swim or just relax in the cabins. Camp Care-a-Lot, a camp in July for underprivileged youth from various counties in the region, used the grounds/facilities for many years in the past, too.

Other rental camps who still utilize WIYCRC: Camp Hope, for local underprivileged youth; Camp Courage, who’ve been coming to camp each year in July for 35+ years for its mentally and physically challenged individuals to enjoy a week of camping; Performing Arts Camp, for youth to enjoy not only camp but to do a show themselves at the end of their week for their families and friends; and, Family Camp, people from many of the original families who help in organizing the inception of this camp back in 1948, who still come as well as other families from this area of Illinois who gather for a weekend of fun, food, activities, and just renewing old ties of friendship.

Adventure Camp for ages 8-12 and Teen Camp for ages 12-16 were the original camps years ago where campers would stay for a week at a time and the weekend Family Camp was the other camp. In more recent years, the camp program to include day camps as well. Several organizations still rent the grounds/facilities as well as individual parties for weddings, family reunions, retreats, and so on for camp has the facilities to meet the needs of such events from April through October, upon request.

Letter from the Board President:

Eight years ago, a group of Kiwanians and dedicated veterans of the 4-H Camp Board committed themselves to the resurrection of the facility, then known as “The Western Illinois Youth Camp and Retreat Center” (a lot of words on a business card, for sure). Together, we established both one- and five-year goals for the WIYC with the immediate focus to satisfy more than $20,000.00 in debt and to repair the infrastructure in order to maintain rental revenue.

Due to urgency in meeting the immediate needs, it was necessary to ask for help from the community in the form of donations for operating expenses and in-kind donations of services. Jacksonville and Morgan County residents stepped up, as they usually do. As a result we continue to grow today, physically and financially, as a camp destination for children and adults.

Today we continue to expand our programs with our new Director Kori Daniels. She brings exciting and educational ideas to our youth programs. She has increased staff in numbers, experience and enthusiasm. In her position as Event Coordinator, she negotiates and oversees outside rentals such as weddings or reunions.

A visit to this 70-acre nature area on the east side of Lake Jacksonville will always convince the visitor of the importance of maintaining and growing this facility for future generations.