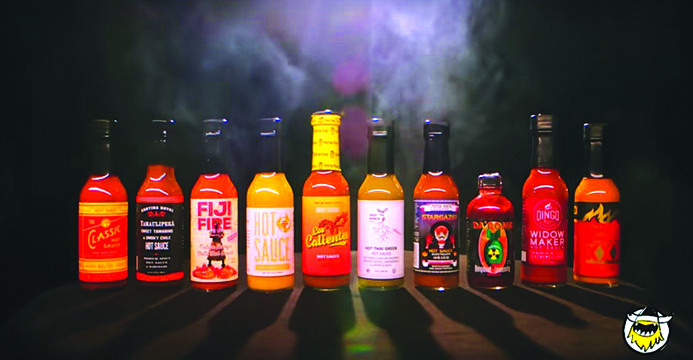 Nine local community leaders are putting their mouths on the line to raise money for local charities, and organizers hope the community will help fan the flames.

On Saturday, November 17, K’s Creek Golf Club will host Hot Ones Chicken Wing Challenge. They previously held the event in 2019, raising over $3,000 for more than a dozen charities in the community. What they hoped would be an annual event was put on hold for 2020 due to the pandemic. With its return, the event will begin with a cocktail hour at 6 p.m. and the main event will start at 7. It all takes place at the new upscale bar and events center for K’s Creek, Legends, located at 1265 Sandusky Rd.

The challenge is heavily influenced by the popular “First We Feast” YouTube series, “Hot Ones.” During this series, celebrities are interviewed while attempting to eat increasingly spicy chicken wings. “When we put this together in 2019, we tweaked it so that the entire community could share some laughs and good times,” remarks Ryne Turke, the emcee and one of the event organizers. “Turnout was great, and the tent was full.”

Each participant must eat a total of 10 chicken wings. Sounds simple, right? Depends on who you are asking. Each wing will be coated in a different hot sauce, and these might be the spiciest wings this side of the Mississippi. While each contestant is dealing with the heat from each bite, Turke will be asking fun questions to give the audience a laugh. At the beginning of each round, the audience will donate to their favorite wing eater; a great motivator to eat through the heat. Audience participants are encouraged to bring plenty of cash to support the various charities. “Dollars, coins and checks are all accepted,” states Turke. “We will present the charity and organization leaders with the donation collected at the end of the evening.”

Having taken last year off, organizers took the extra time to make the event more interactive for participants and the fans that come to cheer them on. This year’s event will have surprise challenges lined up, plus a few twists and turns to keep the fans locked into the entertainment. Also, each fan will have the opportunity to do their own Hot Ones Challenge. All wings with their sauces will be available for purchase.

Tickets for the main event are $5 and you are encouraged to preorder your tickets by calling Ryne Turke at 217-320-1762. The admission fee includes the choice of a domestic beer, house wine or soda for the attendee and the remaining balance will be split among the charities. “We hope that all the friends and family of this year’s celebrities will show up to cheer them on,” Turke concludes. “We are hoping for a big turnout so that we can raise even more money for local charities.” One hundred percent of the money raised goes to the charities. Visit the event’s page, “Hot Ones Chicken Wings Challenge,” on Facebook as well.

For anyone wanting to get a “taste” of the sauces to be used on the day of the fundraiser event, Turke himself will be running through the challenge prior to it on Friday, November 12. So, at 10:30 a.m. that morning, listen to his live broadcast on WLDS 1180 AM or watch the live stream on K’s Creek’s Facebook page. Should be saucy. See you the next weekend on Saturday, November 17 for the real deal.