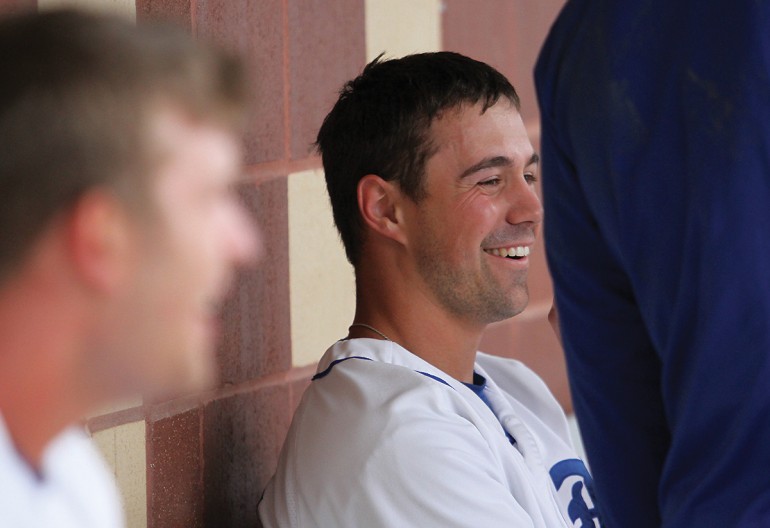 Caleb Howell (top left) smiles while in the dugout April 15 after he collected his 261st hit for Eastern Illinois University. Howell (top photo, middle with no hat) teams up before playing against Illinois College.

To followers of Jacksonville High School baseball, the name Caleb Howell should sound rather familiar. During his four seasons at JHS (2008-2011), he set nearly every single season/career offensive record in school history. And since he left Jacksonville to play baseball for Eastern Illinois University, not much has changed. In a game against his hometown’s own Illinois College on Wednesday, April 15, Howell collected the 261st hit of his EIU career, passing Kevin Seitzer for the school’s all-time record.

Similar to his JHS career, Howell cracked the Panthers’ starting lineup as a freshman, playing in all 57 games of the season during his first spring in Charleston, IL. Over the course of his freshman and sophomore season, Howell racked up 129 hits in 103 games, leading the team in both batting average (.362) and on-base percentage (.442) in his sophomore year of 2013. His junior season, last Spring, Howell set the EIU single-season record for hits with 94 in just 55 games. That’s 1.71 hits per game and a season-long batting average of .420, the third highest in the nation. Entering his senior season, Howell had accumulated a total of 223 career hits, 37 shy of Kevin Seitzer school-high of 260 set back in 1983.

The Panthers current season began with a three-game series and a four-game series, both on the road, against strong opponents from the Southeastern Conference – the Georgia Bulldogs and the Arkansas Razorbacks. Howell got off to a slow start, going hitless in his first 17 at-bats. His first hit came on March 8, in the series-opening game against OVC rival Austin Peay. Flash-forward to last Tuesday, April 14, as EIU prepares for a home game against Benedictine-Springfield. Howell’s season hit total is up to 35, his career hit total sits at 258, two away from tying the school record. He went 2-3 with 3 RBIs on the day, leaving him and Seitzer at 260 career hits apiece. 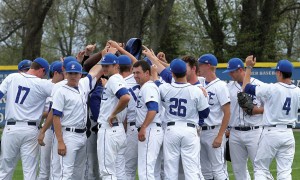 Howell wouldn’t have to wait long for his next opportunity. The following day, April 15, the Blueboys of Illinois College – from Howell’s hometown of Jacksonville – were on the schedule. The milestone came with two outs in the bottom of the 3rd when Howell singled through the right side off of IC’s Luke Pannbacker. It was hit number 261 of Howell’s career. He had the record, Eastern had the lead, and Howell’s day was done.

“Honestly, it was relief to just tie the record on Tuesday,” said Howell, “and then when I broke the record on Wednesday, it was cool that it came against IC. I tried not to think about the record early on in the season, but once I got closer and then tied it, it’s harder to ignore. I’m glad it’s past me so I can just focus on helping the team win games.”

As of Sunday, the career total has climbed to 265 with 15 games remaining in the regular season. Howell’s career batting average of .364, depending on how he finishes up, could place him among the ten best career averages in school history. Regardless of what happens over the final 15 games, Howell’s name will forever be amongst the greatest hitters in the history of Eastern Illinois University baseball. And whenever his college career does come to an end, Howell plans to start training for this summer’s MLB amateur draft.

“That is my main goal, to get drafted,” Howell said of his future aspirations, “I was eligible for last year’s draft and heard from some teams through questionnaires. Once the season ends I’ll go right into preparations for the draft, and I think I have a pretty good chance, I just have to keep working.”