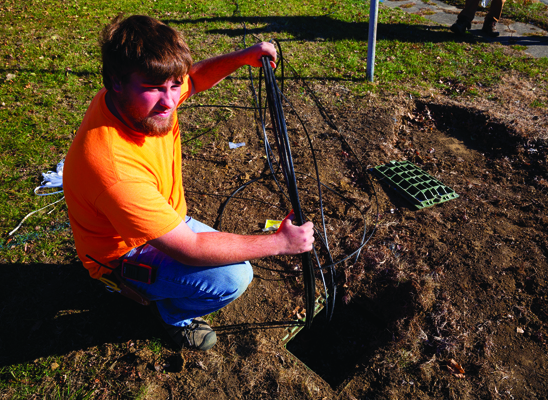 i3 Broadband, an independent and local provider of fiber-optic Gigabit high-speed internet service in Greater-Peoria, Champaign-Urbana, and Springfield, IL is excited to announce that activation of their 100% Fiber-Optic Network has begun in the first neighborhoods in Jacksonville, IL.

The City of Jacksonville has been working toward a partnership with i3 Broadband for several years. “With a growing number of residents working and schooling from home, it became apparent that making affordable, high-capacity broadband available to all our citizens was of paramount importance, now and into the future. The addition of reliable fiber optic technology throughout the whole community brings digital equity to all our residents” said Mayor Andy Ezard, City of Jacksonville.

Expansion of i3 Broadband’s fiber-optic network will continue across Jacksonville as activation reaches the remaining neighborhoods within the coming months and into next year. “By expanding our network throughout Jacksonville, we’re continuing to execute our long-term vision of growing our footprint and growing our relationships with each community we serve,” said Brian Olson, COO of i3 Broadband. “We’re looking forward to providing services that vastly surpass existing providers and enable the City to be among national broadband leaders with a community-wide fiber-optic broadband deployment.”

The first household to be connected to the i3 Broadband fiber-optic network was Scot Seymoure on Lafayette Avenue. Seymoure signed on when i3 initially started taking reservations for service and later was hired by the company. His neighborhood was the initial spot in the city for the network to go live, so his home was hooked up Friday. That way network engineers could test the speed and stability of service before adding more families starting the next day.

The Kuhn family on West Douglas is one of the first families to be hooked up to i3 Broadband’s new fiber-optic network in Jacksonville. The company beta-tested an employee’s home Friday and started hooking up houses east of Duncan Park on Saturday.

• Angie is principal at Illinois School for the Deaf Elementary School and uses a laptop for working from home to observe Zoom classes, run IEP meetings and more.

• Craig uses his laptop to coordinate ISD’s American Sign Language courses. He’s a huge sports fan and that’s about the only use the family makes of regular television programming.

• Grant is a Jacksonville High School senior who is constantly gaming because he has no sports to keep him busy. He had to use a Chromebook for remote learning when he and the rest of the family were quarantined in the fall due to COVID-19.

• Chloe is a seventh-grader at Jacksonville Middle School and has an iPad, a laptop (which she uses frequently for online gaming), a Chromebook for remote learning and watches Netflix on her personal devices frequently.

• Colin is a seventh-grader at ISD and is full-time distance learning this school year. He uses a school-issued iPad every day for remote classes on Zoom. “He’s the most obsessed with iPads and iPhones, and he’s hard to entertain. So, he’s on his phone or someone else’s device probably the most. He listens to music, plays games, watches Netflix and FaceTimes people without permission.”

• Caleb is a third-grade student at Washington Elementary and goes in-person full-time. He has a personal iPad, is a frequent watcher of YouTube and loves Among Us, Roblox and Minecraft.

• A’Yedin is also at ISD and is remote learning on a school-issued iPad every day. “He is most often grounded from his personal iPad for some reason or another, so he probably uses the least amount of our internet data. But if given a choice, he’d be on a device all day, every day.”

• Italy is a kindergarten student at Washington Elementary and goes to school in person. She does have a personal iPad, but her daily usage is more limited compared to the others due to parental guidance. She does love Netflix, and all of the family’s video options are streamed.