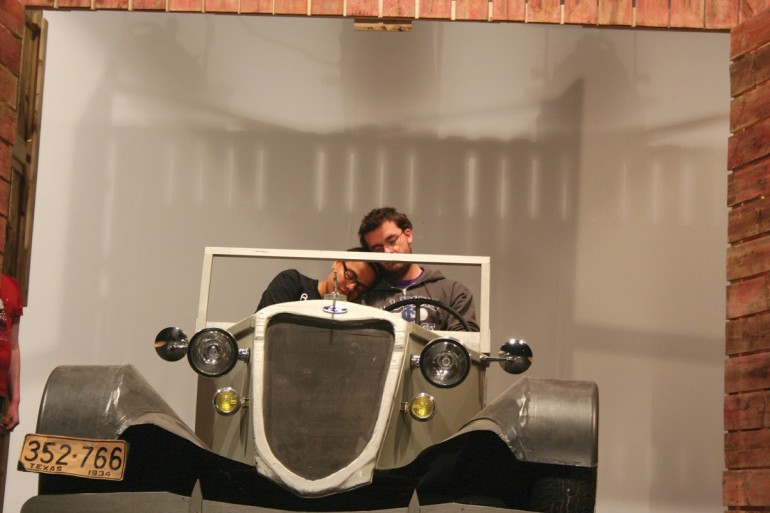 Bonnie (Tamar Norville) & Clyde (Tyler Gillson) ride in their car dreaming of the future they will never get to see.

Illinois College’s Theatreworks only produces a musical every three years and this musical, Bonnie & Clyde is going to open with a BANG, pardon my pun! I was privileged to be invited to a special Press Preview Night and then returned a couple of hours later and sat in on part of their Act I run-through. At the Preview, the four leads … “Bonnie Parker” (Tamar Norville), “Clyde Barrow” (Tyler Gillson), “Buck Barrow” (Drew Stroud), and “Blanche Barrow (Sarah Kline) … performed four of the songs from the show and the scenes leading up to them.

Bonnie & Clyde is a musical with music by Frank Wildhorn, lyrics by Don Black and a book by Ivan Menchell. The musical centers on Bonnie Parker and Clyde Barrow, the ill-fated lovers and outlaws whose story has been infamous since they achieved folk hero status during the Great Depression. Wildhorn described the music as a “non-traditional score, combining rockabilly, blues and gospel music.” I won’t spend a lot of time on the plot of the musical, because most of you know the story, thanks to the 1967 classic film, Bonnie & Clyde, starring Warren Beatty and Faye Dunaway. During the talk-back time after the

Preview, Nancy Taylor Porter told us that part of the reason that this show grabbed her was because it was, “all so new and edgy.” It also fit very nicely within the topic of this years’ Theatreworks Season “The Outlaws”. As Illinois College visits their theme of Justice, Theatreworks takes the other side of justice and explores: “The bandits, brigands, highwaymen, renegades, and outlaws. Call them what you will, outlaws are just that: people who live outside the law.” Musical Director Abby Musgrove was drawn to the show by its eclectic blend of styles, that you don’t normally get to visit all together within the same frame of one single musical.

The cast is extremely talented and bring a certain confidence and comfortability to their roles. Drew and Tyler capture the spirit and drive of the Barrow brothers, but it’s the two young women who will end up walking away with the show. Sarah Kline’s “Blanche” is sweet and strong and strikes every note exactly right. Tamar Norville is breathtaking. You see her inner struggle to be the nice and quiet, young woman that her mother and her boyfriend, Policeman Ted, want her to continue to be and also that desperate need to be a famous movie star/poet. She has a little bit of a wild streak, too, which is exactly what Clyde brings out in her. Tamar handles the nuances of her role beautifully and her smoky, sultry voice lends itself gorgeously for her songs. A couple of other stand-outs in what I watched during the Act I read-through are: Alice Webster as the youngest of the “Young Bonnies” and Sean McCord as the youngest “Young Clyde.” These two kids are exciting to watch! Be sure to sit up and pay attention to the other “Young Bonnie.” Emily Harms. Her voice is powerful and made me sit up in my seat! The rest of the VERY strong cast include: Matt Woodson, Allen Miggins, Max Valdez, Breahna Lesemann, Emma Stuhmer, Amanda Hoffman, Brooke Kuchefski, Jon Miller, Courtney Dietz, Kage Garza-Smith, Brandon Coniglio, Chris Proffitt, Squire Prince, Charlotte Michels, Kevyn Nguemaha, Shunna Tolliver, Brianna Klein, Shunna Tolliver, and Maria Wittenauer.