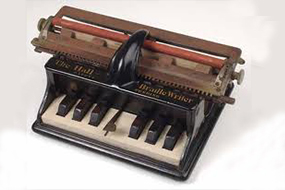 The train pulled up to the Chicago & Alton Train Station on East State street in Jacksonville. A man stepped off on the platform with his bags, pulled out his watch, and looked at the time it was. Time to make a difference in the lives of the blind. The man was Frank Heaven Hall, who changed the lives of the blind forever through his ideas on academic improvements, but more importantly, the creation of the machine.

Frank H. Hall lived in Jacksonville for only a short time, but he left a large mark on the visually impaired community. He was born in  Mechanic Falls, Maine on February 9, 1843. After he served in the Civil War he attended Bates College and began teaching in 1864. He was to spend his life teaching, although during the twelve years he lived in Sugar Grove, Illinois he worked on his dairy farm, ran his creamery and a general store and served as postmaster and township trustee. After this returned to the teaching field when becoming superintendent. at Petersburg. In 1890, Hall was appointed superintendent of the Illinois Institution for the Blind at Jacksonville. When he walked through the front door he knew little about the special needs of blind children. The only thing he thought that these children needed to learn was how to become self-supporting adults. What Hall knew about operating a blind school he learned from his visits to the blind schools in Boston, New York, Baltimore, and Philadelphia, as well as the Printing House for the Blind in Louisville. His first year at the Jacksonville blind school was to observed students and faculty. From this he developed a new tree part curriculum. First, the children would learn handiwork as well as reading, writing, and arithmetic. Second, they would learn to be more self-reliant through military drilling with gymnastics. Finally they would learn a skill or trade, so they would have an equal chance in the work world. Hall served at the school from 1890-1893, and  1897 until 1902.

Dots from the Machine

Louis Braille developed the raised dots method in 1824 as a way for the visually impaired to read and communicate. Hall thought that Braille was the better way for the students to learn because it was  uniform and fast. Slate and stylus was slow and hard for children and adults to read. In 1892 Frank Hall had an idea for a writing machine. “It was obvious at that such a machine must be quite simple and easy to manufacture, thereby placing the cost within the limited means of the poorest of class it was designed to benefit. Next, it must have power sufficient to emboss the points of the Braille system in perfectly sharp relief, and yet touch must be easy, giving the greatest rapidity without fatiguing the operator”. Once Frank Hall developed his idea of a Braille typewriter,  he went to 209 East Court Street to have a local electrician and tinker, Gus Sieber, take on the challenge of building a typewriter for the blind. Siber recalled the meeting “Mr. Hall showed what he called a slate and stylus to punch dots in paper and wanted a writer to do this work.” Hall explained how the writer would work, using the Braille system of six dots and how each dot should be controlled by a separate key, so the dot could be made by single stoke from one of the six keys. The carriage that contained the paper moved one space to the left, ready for the next dot. The writer could also be used  by sighted people.  On May 27, 1892, Gus Sieber presented the machine to Mr. Hall. “Was built mainly of scrap iron and brass and fastened to a rough pine board for a base. It was anything by but elegant in appearance, but the dots made by it were fully equal to those made by the stylus, and although the working was heavy and the machine roughly constructed, the measure of our success was even greater than I expected”  This Braille machine would become known as Hall Braille Writer. Frank Hall and Gus Sieber never patented their design, as Hall beveled this machine should be “free” to make.

Mass Production of the Machine

Siber did not have the capability to mass produce the machine the way Hall wanted, so Siber suggested he go to Chicago and find a machine shop to make the patterns and punches to build the machine. As luck would have it Frank Hall located the Munson Typewriter Company in Chicago and was able to talk to T.B. Harrison, the manager, and C.J. Seifried the designer. The typewriter company built 94 machines at a cost of $10.00 each. Twenty machines were retained by the school and the rest was sold to other schools and individuals for $11.00 each. The Hall Braille Writers were produced until 1921 when the design was sold to Cooper Manufacturing, and later to M.B. Skinner Company. After Skinner the typewriter was made by the American Foundation for the Blind, Howe Memorial Press, and Braille Institute of America. It turns out that Hall’s writers were made in many parts of the United States and the world. The Kleidograph, a twelve key writer, was made by New York Institution for the Blind in 1894. Smith & Corna made a braille writer from 1933 until 1947. An early electric Braille music writer was made by Olympia Typewriters in 1961. In Germany, Osker Picht, a teacher for the blind, made his version of the  Braille writer in 1899 which was manufactured until 1932.  Other Braille writer were made in Japan, England, and at Atrapoint Manufacturing in Czech Republic as late as 2003.

Impact of the Machine

The first machine made by Munson typewriters  arrived in Jacksonville on May 27, 1892. About a week later, on June 7, 1892, the machine was put to the test. Five student from the school were able to type eighty-five words a minute from memory, and thirty-one words a minute when dictated. Soon news of the test spread, the machine was demonstrated at Brantford, Ontario, Perkins Institution, and soon at other schools for the blind across the United States.

When the Chicago World’s Fair of 1893 opened to the public on May 1. Frank Hall was among the hundreds of venders were there to demonstrate the latest ideas of human inventions. One of the many people who visited Hall’s display was one who would become one of the most famous woman in the world, Helen Keller. She was told that Mr. Hall was the person who invented the Braille Typewriter, she put her arms around him and gave him a big kiss on the cheek. He recalled  That response from Miss. Keller always brought tears to his eyes.

It took six keys made a difference in the lives of children and adults who have visual problems. The story of  Frank Hall is on a bronze plaque in the front of the administration office at ISVI. How many people walk by that plaque not knowing the world wide impact that a teacher and tinker from Jacksonville made. Gus Sieber’s shop is long gone now and Hall moved away from Jacksonville after eight years as the head the of school.